Is Bobrovsky Ready for a Playoff Run?

Share All sharing options for: Is Bobrovsky Ready for a Playoff Run?

Officially, welcome Huck -- who will have a username change soon, don't be alarmed when you see this weird "Eric" guy around -- to the BSH team. - Travis

Bob has had a great season, but is he the best choice for a playoff run?

After the jump, I'll dig into each of these three points in some detail.

The quotes from the SanFilippo article were quite unsettling. Kimmo was saying Bob puts them in tough spots, that he's not good at communicating, and in essence that Kimmo didn't trust him yet. Can we find any quantitative impact of these issues, or are they unquantifiable intangibles?

I can think of two ways this could hurt the team. (1) The opponents could get off more shots because of misplays of the puck and/or miscommunication. (2) A few bad mistakes could create really dangerous shots that lower Bob's save percentage without measurably impacting shot volume.

I'll start with the second idea first. Bob has a better even strength save percentage than Boucher does, so if the puck handling skills impact only save percentage and not shot volume, then they aren't having enough of an impact to warrant using Boucher over Bob.

But the impact on shot volume, that's more interesting. It turns out that Bob does face more even strength shots than Boucher; Bob's faced 28.0 shots on goal per 60 minutes of even strength time, while Boucher has faced 26.7.*

That brings up two questions: does that shot differential come from these puck-handling issues, and does it make up for Bob's superior save percentage?

My guess is that the difference is simple variance and not puck-handling skills. That's really just a hunch, but I'll provide one argument to support it: the article said that Bob has gotten better at puck-handling as the season has worn on, which should mean the shots against go down. However, Bob has actually faced slightly more shots against per game as the season has worn on (see below), so I personally don't think this is related to puck handling, but I can't prove it. 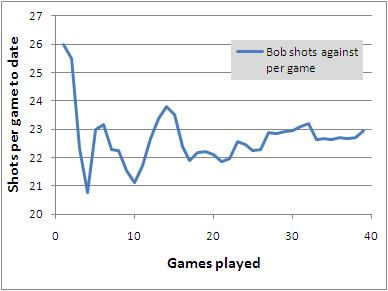 For the sake of argument, let's assume Bob's higher shots-against rate is the result of his poor puck-handling and communication and chemistry. In that case, is the discrepancy large enough to suggest Boucher should be the starter?

As Geoff pointed out (and later called to my attention, thanks!), we've been thinking of Bob as a .930 goalie for a while now, but our perspective is somewhat skewed by an early hot streak. 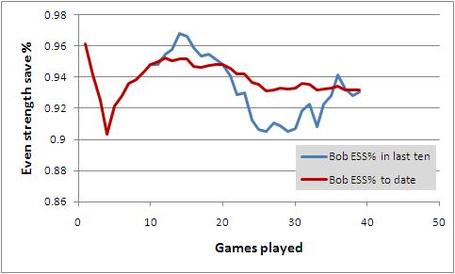 The red curve is his cumulative ESS% to date. It's been at .930ish for a while and we got that number ingrained in our heads. But the blue curve, his moving 10-game average, shows a different story -- he had a great 20 games followed by an average 20 games. Which one is the real Bob?

Well, we don't know yet. That's the problem with these small samples. But personally, I don't see anything in there that suggests he's a 0.911 talent, which is Boucher's career ESS%. But for those of you who want Boucher because you're afraid that Bob is fading, I'll point out that Boucher has had a similar dropoff: 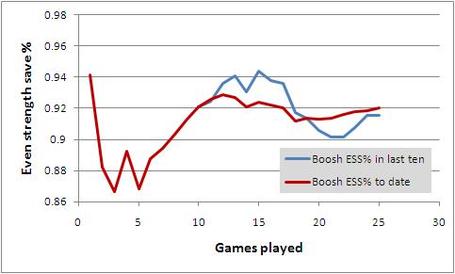 Personally, I think Bob has shown enough for us to believe that he's better than 0.911, and Boucher, despite his great numbers this year, has made it clear in a long career that he's a 0.911 goalie. So I prefer Bob, but there's definitely some risk to it, because he's still quite unproven at this point.

Boucher has been the starter during two playoff runs, and in both he performed well. The sample size is small, but his career 0.922 ESS% does inspire some confidence.

But before you settle on "I don't trust a rookie in the playoffs", I want to remind you that one of Boucher's deep runs was his rookie year. It can happen. In fact, it happens all the time.

Last year, the 23 veterans who played in the playoffs had a combined 0.919 ESS%, while the four rookies combined for 0.920. The year before that, rookies combined for a 0.921 ESS%. It's not about whether your goalie is a veteran or a rookie; it's about how good your goalie is. And although they've both been very good this year, I think Boucher is much less likely to sustain this high level of performance.

*Full disclosure: I couldn't find the time on ice numbers for goalies broken down by ES/PP/PK, so I assumed that both goalies spent the same percentage of their ice time at even strength. The team would have a lot more penalties (~50% more) with one goalie than the other for my numbers to be significantly off, however.