Just what makes the 2010-11 Philadelphia Flyers so good?

Share All sharing options for: Just what makes the 2010-11 Philadelphia Flyers so good?

We know the Flyers have been great this year. One thing we haven't looked at as much is why they've been great -- the offense, defense, and goaltending have all been good, but which aspects have contributed the most to the team's place in the standings?

I'm going to focus on even strength play in games that are close to remove score effects (close means within one goal in the first or second period or tied in the third period), and I'm going to look at how many goals each aspect of play is contributing to the Flyers goal differential.

First off, I want to take a moment to appreciate how good the Flyers' results have been so far. Here's a look at goal differential in close games, adjusted for how much close-game-time each team has had*: 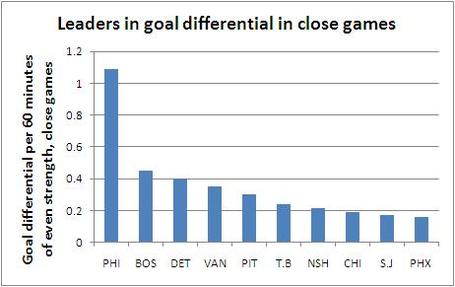 Holy moly, that's really good. In close games, the Flyers are outscoring their opponents by more than a goal per 60 minutes, which is more than twice as good as the second-best team. Where are all of those extra goals coming from? 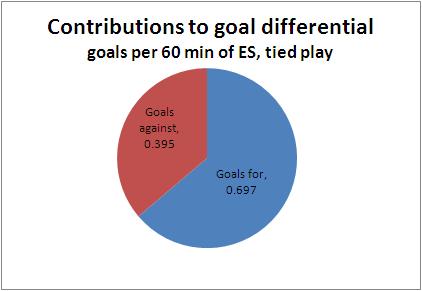 The Flyers get about 0.7 G/60 above average from their offense and their defense holds their opponents to about 0.4 G/60 below average.

Let's drill down one more level. How much of the above-average offense comes from shot volume (which we expect to stay constant in the long term) and how much from shooting percentage (which might regress)? It turns out the Flyers are second in the league in both offensive components, so both make significant contributions.

And how much of the above-average defense comes from shot volume against (which we expect to stay constant in the long term) and how much from save percentage (which might regress)? The Flyers are eighth in preventing shots on goal and second in save percentage. So overall, here are how important those four factors are: 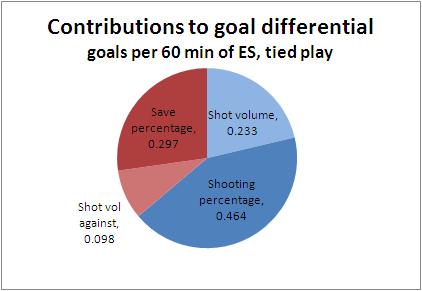 The Flyers' shooting percentage in these situations is so high that it adds more goals per 60 than any other team gets from all sources put together. But all four components are making significant contributions -- even though that ~0.1 G/60 from shot volume against doesn't look like much because it's a small slice of this pie, you have to remember from the first chart that this is a big freaking pie.

So what's the takeaway? Well, the bad news first: as we've warned a lot this year, the biggest contributions are from save and shooting percentages that are probably unsustainable. But the good news is that the very-sustainable shot volume factors add up to 0.33 goals per 60 minutes, which by themselves would put the Flyers among the top teams, and we do expect some additional contribution from save and shooting percentages.

In other words, the Flyers are an elite team at even strength this year, and with good luck on their side they've been able to put up some epic numbers so far.

I'll finish with a small bonus nugget: I wrote this article originally using data that was about two weeks old and when I updated it, I noticed two significant changes. One is that in the last two weeks, the Flyers shooting percentage dropped 0.5% (from 10.2% to 9.7%) for the season. The other is that the Flyers shot blocking rate dropped from 4.7 blocks/60 better than the Corsi leader to 3.4 blocks/60 better. To have such an impact on their season numbers, they must have been way below their usual pace in both categories over the last two weeks.

*Full disclosure: I don't have the actual percentage of time spent in close games to normalize with. I used the percentage of shots that were taken in close situations as a surrogate -- that is, if a team took 700 shots in close games and 1000 shots total, then I estimated that they spent 70% of their time in close situations. This could be systematically off by a bit if games feature more (or fewer) shots per minute when not close, but while it might change the exact numbers, it won't have enough of an impact to change the conclusions.