Why have the Flyers struggled lately?

Share All sharing options for: Why have the Flyers struggled lately?

We've all been frustrated by the recent results (or lack thereof). After the jump, a quick look at some shooting trends points out one pretty clear problem.

I started with data on how the Flyers' Corsi percent has changed over the course of the season. It didn't show much change at all, and I suspected the reason was score effects: teams tend to shoot a lot more when they're losing, so any dropoff in the Flyers' play recently might be somewhat covered up by the score effects.

There's a simple solution to this problem: break things down and look at their Corsi when they're ahead, tied, or losing. That gives us the following chart, which shows a moving average of their recent performance in each of those scenarios. 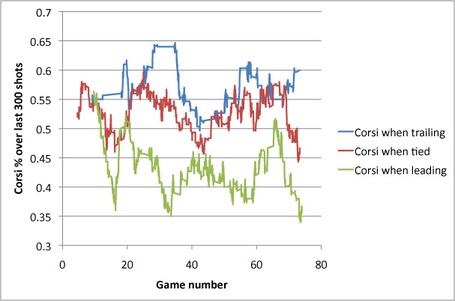 Data this complicated is like a Rorschach test; everyone can come away with their own interpretation. But here's what I see:

Let me make one small addition to this chart and see if I can answer that last question. 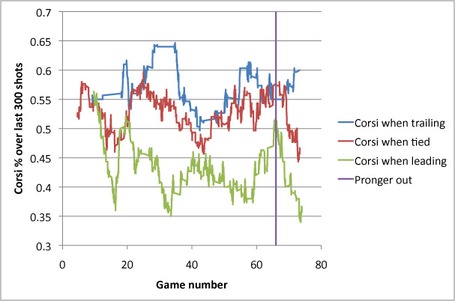 Get well, Prongs. We need you.

Edit: Great addition from zot22 -- Pronger also missed games 34-46, which happens to be right where that mid-season slump happened.