A few reasons why the Flyers are awesome

Share All sharing options for: A few reasons why the Flyers are awesome

There's a lot of doom and gloom around our Philadelphia Flyers lately. OH MY GOD THEY LOST TWO STRAIGHT THERE GOES THE STANLEY CUP. It's understandable, I guess. The team has been fantastic all year long and we're just now going through a rough patch for the first time all year. We're not conditioned for this right now.

But that's exactly the point. It's the first rough patch in a very, very long season. It's late February-early March and the season is winding down, but it's not quite the stretch run yet. This stuff happens.

It doesn't mean the Flyers aren't awesome, though, and it doesn't mean they won't roll through the playoffs on their way to our first Stanley Cup in 36 years. Here are a few quick reminders of how awesome we are. 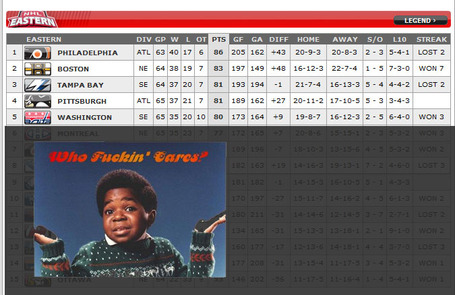 (Apparently the boys at FGSB had a Photoshop similar to this a few months back -- can see it in the comments. They complained, so this is us giving credit to them for coming up with us first.)

Look at this. The Flyers are going through some minor struggles, Boston's won seven straight, and the Flyers are STILL IN FIRST PLACE. By three points, too. With a game in hand.

Click to enlarge if you must. The Flyers have three guys with 20 goals and will have five, maybe six or seven, by the end of the year. Book it. Also, four guys have 50 points and Ville Leino is on his way there. That's just insane.

Remember that team that did this.... 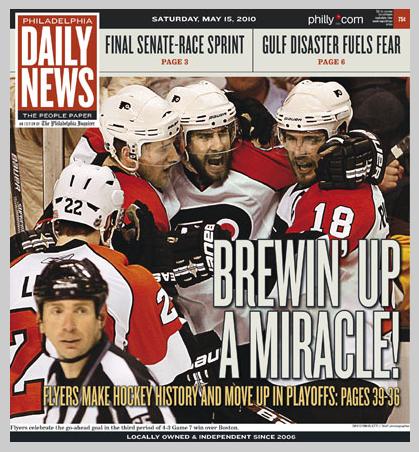 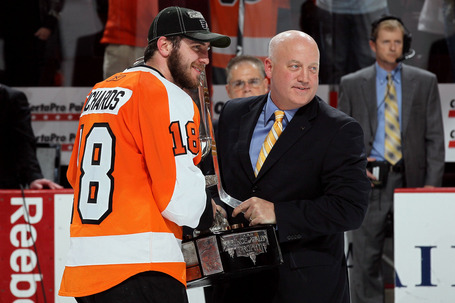 Yeah, for all intents and purposes... same freakin' team. They kick ass. And they're better than last year by just about every metric you could think of, from quality of playoff beards to goal scoring to goaltending to quality of road jerseys.

If this team really can do the incredible, which the first three reasons prove they can, we already have the entertainment booked for parade day.

Relax. The Flyers kick ass in more ways than you know. Everything will be alright.