Admittedly, we don't do these often enough. In addition, I don't think I've done a single Flyers goal. But with so many different defensive lapses to choose from, why not dust off the old "Grab" Utility?

So for this one, we'll look at the Sabres' third goal of the game. NHL.com picks up the play as the puck is wrapped around the boards to the near side:

Jump for the frame-by-frame breakdown. 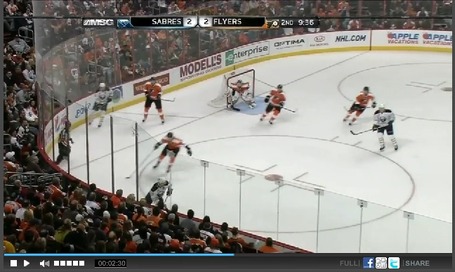 Here, the puck gets collected at the half-wall by the Sabres. James van Riemsdyk has swooped down to defend a pass back down low. You can argue that he's too low, but at this point, he's the deep forward. If the puck carrier goes up the wall, he knows/correctly assumes he has Jeff Carter at the point.

Braydon Coburn follows his man along the wall, Kimmo Timonen is setting up shop in front, and Claude Giroux, at this point, either needs to follow the man in front of him or get out to the far point. 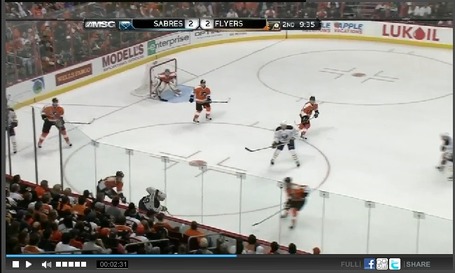 Here we see Jeff Carter come into the screen. As it stands, the Flyers appear in decent shape, with Giroux going to the point, Carter setting up between the point and the puck, Coburn on his man, and van Riemsdyk blocking the wall. But when you watch this part on video, you can tell that just isn't the case. With Giroux going to the point, Timonen is too far away from the Sabre Giroux is skating away from. Oh, and Jeff Carter decides to go for a big hit. 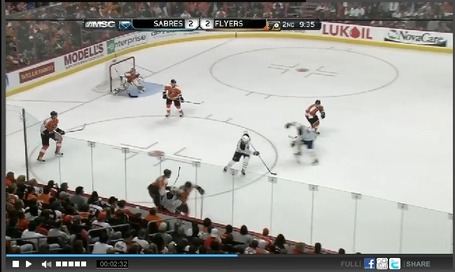 And Carter delivers. But not before the puck is passed. And already, we can see the defensive coverage fall apart. Carter's hit takes him out of the play, but it also instantaneously puts van Riemsdyk in no-man's land. Giroux no longer has positioning on the player coming from the point, and would require the puck carrier to try and cross the ice. Naturally, that doesn't happen, so Timonen is left...

... attempting to block a shot from roughly 18 feet away. Not even he can be expected to do that. So Giroux has now decided against covering the puck carrier to cover the point man, who is now at the faceoff dot. van Riemsdyk is left trying to get to the puck carrier after suddenly having Carter take his man. And Timonen has chosen to attempt a shot block, thus leaving a streaking player go right past him. Oh, and Coburn is about to lose his man. Not to mention Sergei Bobrovsky is really far back in his net, not expecting this development at all.

Oh, and this is only the halfway point! 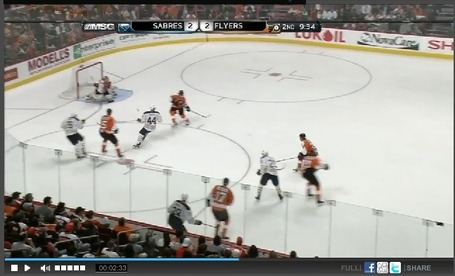 The shot is taken. Timonen misses the block, Coburn stops skating, and Giroux is now even with his man. All three of these Flyers will lose their men, while Carter and van Riemsdyk drift without direction. The Flyers are about to have two Sabres closer to their goal than any Flyer 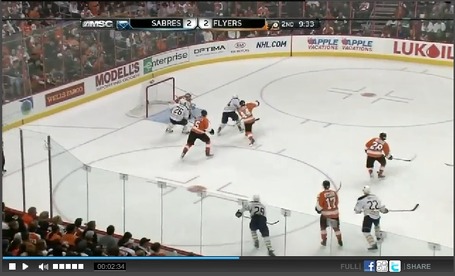 Coburn has lost his man, Timonen is left attempting to... hook his man, Carter stopped skating, and van Riemsdyk is out of the picture. Not to single him out more than others, but Jeff Carter is about to make his second bad decision here. Only this time, his vice is laziness, not over-exuberance. Giroux, meanwhile, is skating. But it just keeps getting uglier. 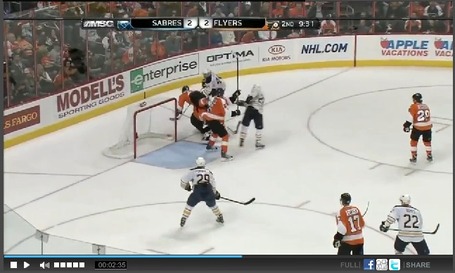 Coburn knocks his man away, Timonen trips over Bobrovsky, which knocks him out of the pay, and neither Giroux nor Carter are skating. Meanwhile, the Sabres will now have three players on their feet within 18 feet of the net while the Flyers only have one (Coburn). 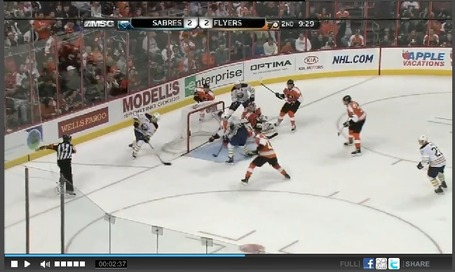 Here we see where the moment before Andrej Sekera scores the go-ahead goal. Coburn tries his best to cover the far side of the net, but it's too late.

In all, you see everyone on the ice find themselves out of position at one point during a 5 second period. But seeing as how they were all roughly in position at the beginning of that, it's rather fascinating that all 5 skaters manage to get out of position that quickly.

It's not fair to blame Jeff Carter for starting that chain reaction due to his hit along the wall - since that doesn't excuse Coburn, Timonen, or Giroux from missing their assignments - but it was that play that started the confusion. From there, everything compounded.