Who do the Flyers want to face in the playoffs?

Share All sharing options for: Who do the Flyers want to face in the playoffs?

The Flyers have a playoff spot wrapped up and are leading the division. We want to see them play well down the stretch and enter the playoffs with confidence, but the most tangible thing they're playing for at this point is seeding.

Home ice is one reason to want a better seed. Home teams are winning 51.4% of the games this year, which means that if two equal teams match up in a seven-game series, you'd expect the team with home ice to win 53% of the series. That 3% edge isn't huge, but it's certainly worth rooting for.

But an even bigger edge can come from getting the right matchups. Think back to last year and how everyone suspected the Flyers would give the Devils trouble. After the jump, I'll take a look at what history teaches us about which matchups will be the most (and least) favorable so that while we're rooting for the Flyers to claim the #1 seed, we know who we're hoping to get into the #8 spot.

One of the reasons people thought the Flyers would give the Devils trouble last year is because the Flyers were 5-1 against the Devils in the regular season. This is a natural thing to suspect, that a team that beats another in the regular season probably matches up well against them. We talk a lot on here about luck playing a big role in small samples, but it turns out that there is real predictive value in even that brief season series between two teams. 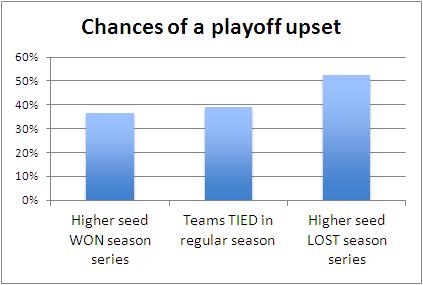 Unfortunately, that doesn't help us much in this particular situation. The Flyers have clinched at least a season-series tie against all of the playoff contenders except Boston and Tampa, and I need to come up with something more interesting than "we'd rather not face the #2 or #3 seed if we can help it." [Tampa fell out of the #3 spot after I wrote this, but you get the point.] So let's look for other clues about potential matchups.

What about style of play? Historically, does the underdog cause more trouble if they are balanced between offense and defense or if they do one thing really well? Let's see what the data can tell us. 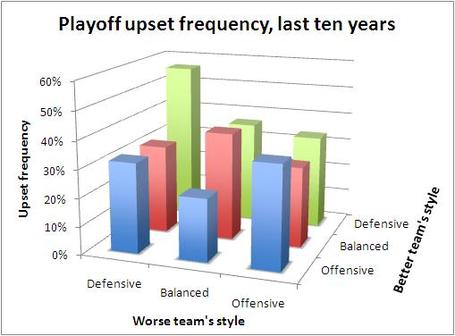 There's a lot going on in that chart, but notice how the three tallest bars are down the diagonal from right-front to back-left. Those are the ones where two teams with the same style face off, and they consistently result in the highest upset percentages. In particular, the upset percentage is extremely high when two defensive teams square off -- presumably because luck plays a large factor in games where few goals are scored.

This year, the Flyers rank #4 in goals scored per game and #12 in goals against, so they are squarely in the offensive category. We can read from the blue bars that when the better team is offensive, they do best against teams in the balanced category, getting upset only 22% of the time. So we're rooting to face a balanced opponent, our second choice is a defensive opponent, and the scariest would be an offensive opponent.

All in all, where does that leave us?

The best first-round matchups appear to be Toronto (balanced team, 2-1 head to head) or the Rangers (extremely defensive, 4-1 head to head). Carolina is an offensive team that we'd prefer to avoid.

And when the Flyers have to face one of the top seeds deeper in the playoffs, Tampa Bay (very offensive team, 1-3 head to head) is much scarier than Boston (border of defensive/balanced team, 1-2 head to head).

I have a little bonus nugget to explain why I'd much rather face a defensive team than an offensive one, even though the difference in upset percentage isn't enormous. The above data was based on ten years -- five before the lockout and five after. But the rules changes after the lockout had a huge impact on what style is most successful in the playoffs: 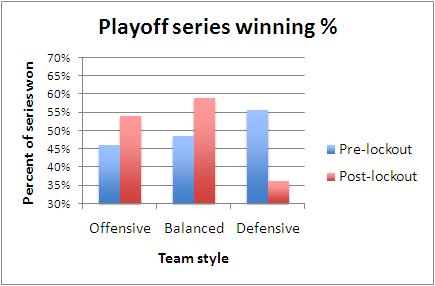 In the five years before the lockout, teams that were better defensively than offensively had the most success, but they've been completely stymied under the new rules. Since the lockout, defensive teams are winning barely a third of their series, and much lower than that when they're the underdog. So while the numbers suggest a balanced team is the best matchup, a defensive opponent would be just fine with me too.