Exclusive: Michael Leighton to Switch Catching Hands in Hopes of Returning to NHL

Share All sharing options for: Exclusive: Michael Leighton to Switch Catching Hands in Hopes of Returning to NHL

Disclaimer: Honestly, the fact that I'm writing this disclaimer right now makes this all a million times funnier than anything we wrote in the story. This story has apparently whispered its way up to Glens Falls, thanks to some people not realizing it's a joke. Goalies don't switch hands, especially not as some bizarre attempt to make their five-hole smaller. This is an April Fools joke. - Travis

GLENS FALLS, N.Y. -- There have been many stories about Michael Leighton and his journey from the Stanley Cup Finals to the AHL, and while he's having success with the Adirondack Phantoms, he doesn't want to stay long. Despite being under contract for next year, Leighton is looking for any advantage that can get him another look in the NHL sooner rather than later.

In a rather unorthodox move, he's taking the step of switching his catching hand from right to left. Currently, the list of left-handed goalies is slim, including only seven netminders. But after seeing such guys as Rick DiPietro, Steve Mason, Jose Theodore, Josh Harding, and Jeff Deslauriers stay in the league for many years and have success, Leighton is working on joining that elite club.

"It won't be easy," Leighton said after a Saturday morning practice, "but after watching guys like Deslauriers and DiPietro find jobs in the NHL, I think I can prove I'm just as good as them. If it means becoming a lefty, then I'm going to try it."

He may be onto something, too. Prior to the season, Columbus signed former Calder Trophy-winning goalie Mason to a two-year, $5.8 million deal. DiPietro, of course, is in the middle of a 15-year, $67.5 million deal.

"He just has such drive, such fight," assistant coach Riley Cote said. "He works really hard and he just has that desire, you know? I see a little bit of myself in him, to be honest. People always said we didn't belong and we should just go away so the NHL club got some cap relief, but like me, he's really good at getting in the way of flying objects."

A resilient nature is what endeared Leighton to Philadelphians last year. After being waived in the regular season (again), Leighton carried the team on his back in the playoffs, earning three shutouts in the Eastern Conference Finals before giving up that back-breaking goal to Patrick Kane in Game 6 of the Stanley Cup Finals.

"I try not to think of that goal often," Leighton said, "but when I started thinking about what I can do to make it back to the NHL, I thought to myself, 'If I switched my catching hand, my five hole wouldn't be as big.' And right there, I decided to do it." 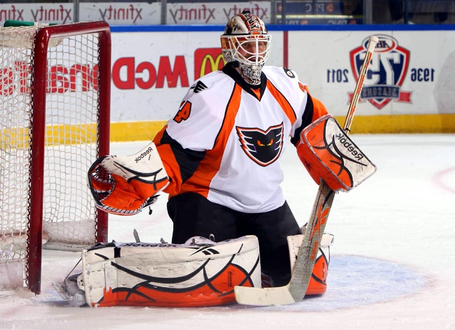 The Flyers organization, when asked about Leighton's decision, didn't have much to say.

"Leighton?" John Paddock asked. "Oh, yeah. Well, he's still here, and that Tomas Vokoun is left-handed and he's pretty good." When reminded that Vokoun is a free agent this summer and Leighton is not, Paddock just smiled and walked away.

"Well, I already asked my friend Ryan Parent to help me out again, and I also asked the NHL if I can wear Dax's costume in a game."