Which Flyers defensemen improve their teammates the most?

Share All sharing options for: Which Flyers defensemen improve their teammates the most?

In the last day or two, I've been posting some of the findings from the with-or-without-you scripts I put together to look at how pairs of players perform together.

Yesterday I questioned the reported lines and in particular the reported decision to put Nodl with Carter and Giroux. Nodl didn't end up playing on that line, so either the Inquirer reported the lines wrong or Lavy changed them before the game started (maybe he saw my article).

Earlier today I showed why the Carcillo-Richards pairing that was used a fair amount last year has been abandoned.

Now it's time to take a closer look at the defensemen, after the jump.

With-or-without-you analysis on the defensemen is simpler in some sense because there are way fewer pairings to look at, but it's also tougher because the pairings don't change as much. Here are all of the pairings that played together for at least 200 shot attempts (roughly 100 minutes of ice time):

I'll walk through the first line to make it clear how to read the table. When Carle and Meszaros play together, their Corsi is 54.8% -- that is, the Flyers get 54.8% of the shot attempts when those two are both on the ice. (I like Corsi because it correlates well with zone time, puck possession, and goal scoring.) That 54.8% number is 4.1% above Carle's overall average and 4.7% above Meszaros' average. A few assorted observations from this data: 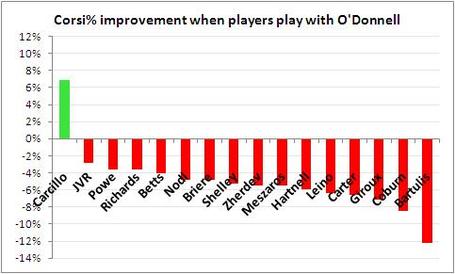 I guess I didn't need a chart to tell me SOD wasn't as good as the top five defensemen, but man, that red makes my eyes hurt. At least Carcillo likes playing with the old guy.

And finally, I found it interesting that it appears that certain lines have done better with certain defensemen behind them. It looks like the Hartnell-Briere-Leino line loves having Pronger backing them up: 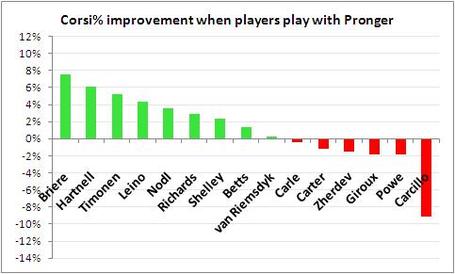 Whereas the Carter-Giroux line really prefers having Timonen behind them: 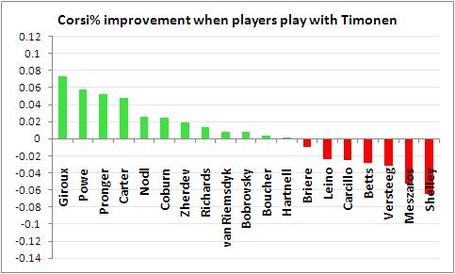 This isn't just a small sample size issue either -- Timonen has spent more ice time with Giroux and Carter than any other forwards, whereas Hartnell, Briere, and Leino rank 1, 2, and 4 on Pronger's most-played-with list. We've said all year that both HBL and Pronger have been deployed in primarily offensive situations while CG_ and Timonen have been in defensive situations. Now we see that not only is that true, but that it was the correct usage.

So to sum up, WOWY analysis gave us another look at Pronger's impact, made a case for Mez as being quite impactful, showed just how big the dropoff to O'Donnell is, and gave us a neat look into how the top defensemen have been strategically deployed.