The Bruins defense is beatable

Share All sharing options for: The Bruins defense is beatable

Was the Boston defense really any good this year?

We know Chara is awesome, and his impact in the post-season is even larger as his ice time creeps up towards 30 minutes a game. And the Bruins were second in the league in goals against this year, so it's easy to look at that and assume the defense played great.

But it's really not that simple. You might have heard this mentioned once or twice at some point, but Tim Thomas had a reasonably good year this year. So we can't just point to a low goals against and assume the defense was great, for exactly the same reason we can't just use GAA to rate goalies. The goalie and the defense both play a role in determining how many goals get scored. After the jump, I'll tease out who deserves the lion's share of the credit here.

Let's start with the simplest view: let's say the defense's job is to prevent shots and the goalie's job is to stop them. So we'll measure the goalie by save percentage and the defense by shots against per game.

Thomas had a record-breaking save percentage of .938 this year. The league average was .913, so over the 1811 shots that Thomas saw this year, a goalie with an average save percentage would have allowed 46 more goals. Thomas had 56 games' worth of ice time, so he saved the team 0.82 goals per game when he played.

The Bruins gave up 32.7 shots on goal per game, second-most in the league. The league average was 30.4, and the extra 2.3 shots cost the team 0.2 goals per game. The same was also true at even strength, so this isn't just an effect of how many penalties they took.

So in the simplistic view, the Boston defense was one of the worst in the league, but a record-breaking goaltending performance more than overcame that to result in a better-than-average goals against. What could we be missing here?

The answer everyone jumps to next is that a defense can be very good by keeping all of the shots far away and that a lot of non-dangerous shots would give us the wrong impression -- Thomas would look like he was saving the day on the stat sheet, when really the defense was making his job easy. In fact, this is exactly the claim some Boston fans made recently when I expressed skepticism about their defense, that the defense packs down low and gives up lots of shots from the outside, but their conservative positioning clears rebounds quickly and doesn't allow as many shots from in close as most teams do.

Well, we can check on that. The play-by-play that the NHL provides records distances for every shot. I've parsed the data for the Flyers, Bruins, and Sabres, so we can see how they compare in this regard. Here's how the three teams compare in their number of shots on goal allowed at 5-on-5 from various distances: 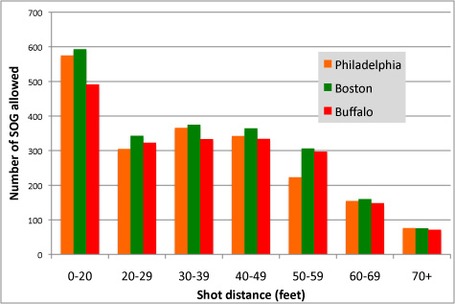 We're not comparing Boston to teams that ran really tough defensive systems; Philadelphia and Buffalo ranked 13th/17th in SOG allowed and 11th/18th in goals allowed. Yet the only distance where Boston didn't allow the most shots on goal was from 70+ feet. In other words, not only did they allow more shots than either of the other two teams, but a higher proportion of those shots came from in close.

This leaves two arguments for someone who wants to say that Boston's defense played well this year.

They could argue rink bias -- some teams award shots more easily than others, which could have inflated the total. We can check that with home/away splits: 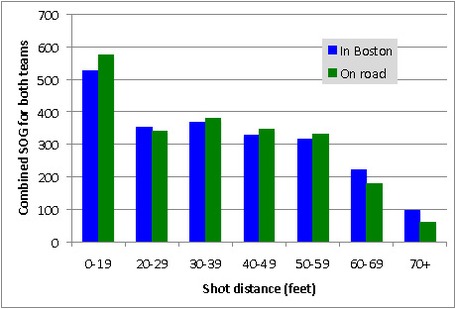 This chart is the combined shots for both teams, to minimize any effect of home ice advantage. If anything, it looks like the Boston rink tends to overcount the point shots, so the fraction of shots from the outside is probably even smaller than indicated in the first plot.

That leaves just one argument left for someone who wants to argue that the Boston defense has played well this year: shot quality. It's a very natural tendency and everyone goes there -- there's no question that some shots are more dangerous than others from the same spot, and so you want to believe that a certain system results in more high-quality shots than another. And yet even though legions of people have put this argument forth and dozens have tried to find evidence that such a system exists, nobody ever has.

I can only conclude that the Boston defense just hasn't been very good this year -- they're giving up lots of shots, from fairly close in, and only Thomas' miracle season has bailed them out. With the top pairing playing half the game in the playoffs, things might be a little different, but I have to believe the Flyers can continue to get pucks on net and that some will go in. Shore up the horrific defensive breakdowns in their own end from game 1 and they can take this.