Defensive breakdowns in the playoffs, Part 1

Share All sharing options for: Defensive breakdowns in the playoffs, Part 1

The Flyers gave up 3.5 goals per game in the playoffs, which is a big part of why their season is over. We've had a lot of talk about where to pin the blame -- on the goalies, on various defensemen, on the coaching and matchups.

This article will be the first of a series where we go game by game through the playoffs and assign blame on the defensive breakdowns. I'll assign each error a blame score from 1 (least bad) to 5 (worst). We can tally up the results and see who really had the most issues in the playoffs and think about what needs to be fixed.

After the jump, we'll look at Game 1 vs. Buffalo.

The defense was quite tight in this game; there were only three plays that I counted as really putting the Flyers in any serious jeopardy. That means I can go through each in quite some detail; in later games where they give up 10+ scary chances, I won't have that luxury.

The embedded video below isn't working right, so if it's not the right clip for you, here's a link to video for the first chance.

We'll pick it up here, with Meszaros carrying the puck up the ice. 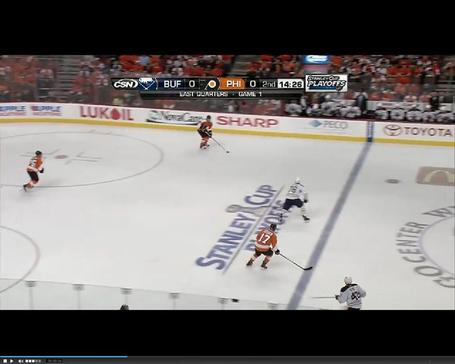 There's a Sabre in front of him, off the screen, so he can't go too much farther without getting into trouble. However, I think he needs to go one more stride to make the forechecker commit and give Carle a bit more space. He doesn't, and he compounds this by putting the puck a bit behind Carle with his pass: 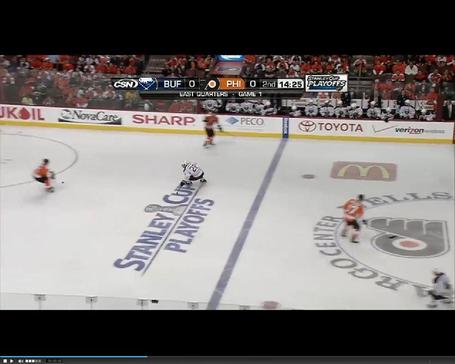 At this point, Carle needs to send it right back to Meszaros. Unfortunately, he overestimates either how much time he has or how good his stick work is and tries to bring the puck out in front of him. It gets chipped away from him, and as the last man back, he's lucky this wasn't worse -- at least the puck went forwards when he lost it. 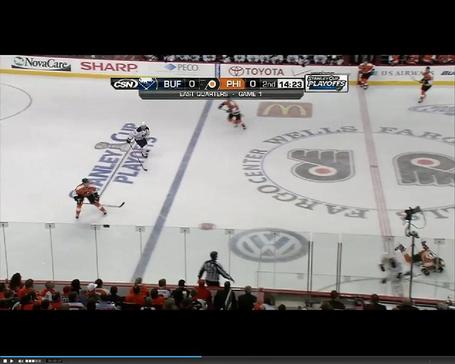 I don't know how Giroux ended up on the ice here, but it really compounds things. A full-fledged odd-man rush is now developing. 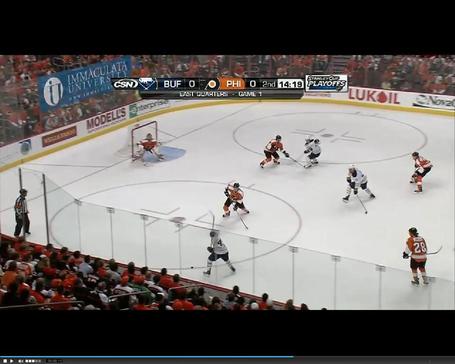 JvR has hustled hard from the time of the turnover and gets there in time to provide some back-checking support, which allows Carle to come at the puck-carrier a bit more aggressively. In contrast, Giroux is flat-footed and coasts all the way to the net on this play, too late to help out in the event of a rebound -- it didn't matter here, but it irked me nonetheless. Bob is a bit deeper than I'd expect and is presenting a lot of the top of the net, but he shows off a quick glove and snags the high shot without a rebound.

Overall blame score: 2 points for Meszaros for putting Carle in the tough spot, 3 points for Carle for making the bad decision, and 1 point for Giroux for being face-down on the ice at a key moment.

>> Click here to jump to the second chance. We broke them up into pages to make this lengthy, image and video-heavy story easier to digest. <<