Predictably, the Mike Richards vs. Peter Laviolette story was blown out of proportion

Share All sharing options for: Predictably, the Mike Richards vs. Peter Laviolette story was blown out of proportion

On Monday in Voorhees, as the Philadelphia Flyers packed their things and sat through meetings in preparation for a long summer, Peter Laviolette held court with the media for 40 minutes. We weren't there, but we've read transcripts and stories and watched video and we know what Laviolette said and what happened during that time.

The big storyline in the aftermath of that lengthy chat came on the Mike Richards front. Apparently, his relationship with his head coach is still a work in progress.

It's not easy to get along with people, even when you do see eye-to-eye with them on most things. Apparently, that's the case with Richards and Laviolette. It's natural. It's normal. Here's what Lavi had to say on that exact front.

Non-issue. Absolutely, positively a non-issue. Peter Laviolette spent a really good chunk of that media session defending Mike Richards, and Ryan Bright of Philly Sports Daily wrote that exact story. You know, the proper story. He didn't inject his opinion into it. He wrote the f*cking story like it should be written. With the facts and stuff.

We shouldn't have to give him kudos for that. It's his job as a journalist. Unfortunately, not all of his colleagues did it like that. And that sucks a whole lot.

Let me just quickly say that I have all the respect in the world for Tim Panaccio. He's been around on this beat for over 20 years, almost my entire life. That's the kind of longevity that demands respect, plain and simple, especially from someone relatively new on the scene.

That said, it doesn't make one immune to criticism.

Let's get anecdotal here for a second.

A few months back, the Sabres were in town for a relatively routine regular season game. The Flyers lost I believe, and Patrick Kaleta was running around like the little punk that he is throughout the game. Richards came out to speak with the media afterward, and while everybody else was still busy gathering around another player (likely Danny Briere), I wandered over to Richards and asked about Kaleta's impact on the game.

He stood there, listened to my question, then gave some snarky response that was pretty unfair -- I don't ask many questions, but when I do, I make sure they're legit -- and walked away from the three or four of us who had gathered around him. It was the definition of rude.

Guess what I did? I laughed it off, moved on and didn't let it bug me. I didn't hold a grudge against Mike Richards. Hell, I still own his jersey. I didn't burn it in effigy. I wore it last week.

But it seems like a lot of reporters can't get over that stuff. It's the only way to explain the kind of stuff that comes out of their heads, onto their keyboards and into our brains.

There have been widespread rumors, even reports in Canada lately, that Laviolette and Richards simply weren't talking by season's end.

Sources CSNPhilly.com talked to in the past month said the same thing.

"If you ask me a question if we were talking at the end of the season, the answer is, ‘yes.' I have a relationship with Mike and I think it is something we can work on over time."

And that in itself is illuminating.

Because in the almost two seasons Laviolette has been here, the relationship between himself and Richards - who can be moody and withdrawn - is still not developed.

See that? It's Peter Laviolette completely discounting those rumors and all that stuff that was said about the relationship between he and his captain. Yet, it's "illuminating."

No, there's nothing "illuminating" about it. Nothing stands out there. As we already said, and as Laviolette alluded to, relationships are never really fully developed, even at the most intimate levels. I bet he'd say that about any player on his roster. I bet he'd say it about his wife (although he wouldn't since it's none of our damn business).

And if you don't believe Laviolette -- maybe he's covering for somebody, who knows -- take it from another player on the team. Here's Scott Hartnell talking about the criticism of Richards, as quoted by the Courier Post.

It's very unfair. He's the hardest worker. He's got the biggest heart. People who are saying he doesn't care or he didn't give it his all out there doesn't know what they're talking about because he's one of the most well-liked players I've ever played with.

But, the witch hunt continues. Again, via Panaccio:

Laviolette admitted that relationship is still in its infancy and needs more work, though he said he had no issues with Richards.

If the captain isn't confiding in the coach on a regular basis, that can be a problem.

On the ice, throughout much of the year, there appeared to be an emotional detachment by Richards from the game itself. He often seemed unhappy among reporters. One player said candidly Richards was the "most unhappy superstar" in Philadelphia.

Never mind that the coach just talked about how there are no problems between he and his captain. You know, there really could be a problem here guys.

And you know what doesn't matter in the slightest bit? How Mike Richards talks to the media. Or his "emotional detachment" from them or whatever. (Oh wait, he's emotionally detached from the game? Bull. Shit.)

No, it means he doesn't like having microphones and recorders shoved in his face by writers who are probably just going to write bullshit about him regardless of what he says.

Would you trust a press corps that called you "Captain Whine"? Yeah, didn't think so.

Mike Richards is a damn fine hockey player. He's probably not perfect, and his relationship with his head coach probably isn't perfect. But he's a two-way stud on the ice and there's no questioning the passion and the "lead by example" attributes he possesses, no matter what manufactured controversy comes up next. And apparently, his coach and his teammates respect him too.

You want to see something that really matters? There are 35 seconds left in the Flyers season, they're losing 4-1 to the Boston Bruins. Look what Mike Richards does to prevent an empty net goal. 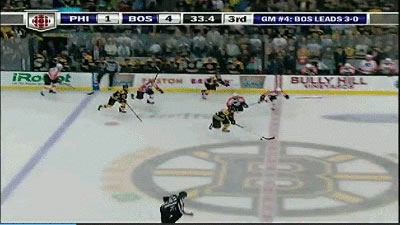 That's a head first dive. Tell me all about his emotional detachment from the game, will you?

Let's stop with all this BS. It's getting really, really old.