Share All sharing options for: Defensive breakdowns in the playoffs, Part 1 (cont'd x2)

This story was written by Eric T. It begins here. It continues here. This is the final portion.

And the third and final scoring chance is the only goal of the game:

We join this one when the board battle has just been completed. Having been beaten along the boards and knocked down by a player barely tall enough to ride the roller coaster, Leino is seeking vindication by lying down on Gerbe's hockey stick and kicking Gerbe's other stick. 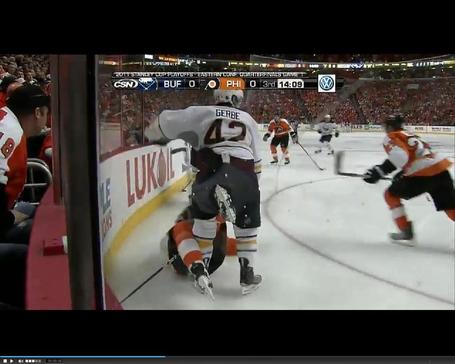 The puck swings to the far point and we can see that Leino lying down on Gerbe's stick is actually the most effective defensive effort on the play. No other Flyer is even close enough to a Sabre to dive and trip them. 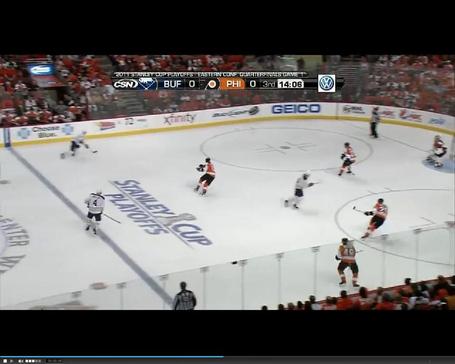 Notice in the above picture how Kaleta and Carle are both headed to the net. Carle skates exactly parallel to Kaleta, never getting any closer than he is above. I like to imagine the following conversation took place:

"Not much, just going to go score the game winning goal."

"Awesome, mind if I come along and watch?"

I have to admit, Carle does have a really nice view of this goal: 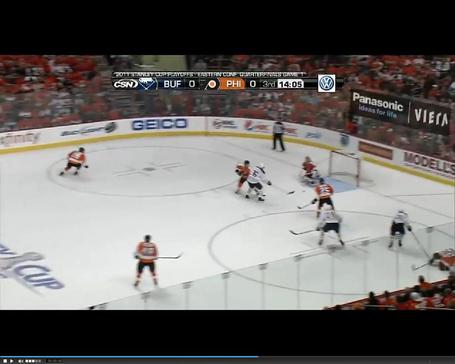 Overall blame score: There's probably some blame on someone for going from an offensive zone faceoff win to this chance against in a ten-second span, but unfortunately we don't get to see how that happened in this video. Hartnell missed a chance to deflect the cross-ice pass and then didn't get to the point in time to make any difference, so he gets a point.

Briere's lack of effort and complete unawareness about where his man is earns him 2 points. I want to give Leino some credit for tenacity, as he's still holding Gerbe's stick as the goal is scored, but when a guy loses a battle and then lies down during a play longer than Albert Haynesworth, he gets 2 points. Syvret was in a tough spot, but he really needs to help with Kaleta sooner and/or better than he did, so he gets three points.

Carle gets 4 points for helping to lose the board battle, going to the wrong man after the puck came out, and then recognizing who the dangerous man was but not making any real effort to cover him.

Defensive blame totals after one game:

>> Click here to jump back to the comments. Thanks for clicking all the way through. <<