Because this article is large and heavy on graphics, it has been broken into a few pages. Click here to go back to the start.

The third video is here:

This one starts with Coburn sending the puck around the boards and Hartnell, Briere, and Leino all aggressively going in deep on the forecheck. When Montador gets to the puck before Leino, they are in a little trouble. Hartnell's position below the goal line on the far side of the ice isn't doing much good, but the real problem is that Briere sees his two wingers going in deep and follows right along. (Contrast with Richards peeling back as soon as he saw Nodl go in deep in the second video from game 1.)

If Briere gets the puck and sends it deeper, all is forgiven. But it gets by him, and at this point Buffalo already has a 3-on-2 developing. 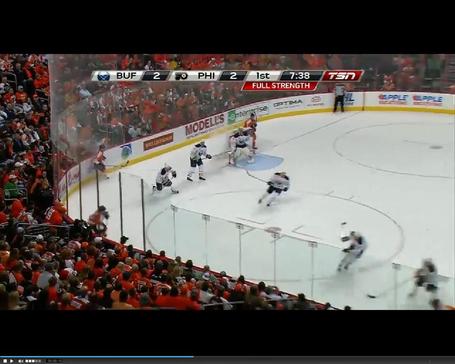 Here is where it gets ugly, as O'Donnell (just visible in the bottom right corner) decides to step up and try to send the puck back in. Sekera easily beats him to the puck, and like Briere, O'Donnell can't even get a piece of it as it gets chipped past him to create a 3-on-1. Poor spacing by Buffalo allows Coburn to take away both passes initially, and O'Donnell hustles back to take one away as they spread out, so Sekera is forced to take the shot.

Bobrovsky stays deep in his net and hunches his body over in a way that makes his upper body small. 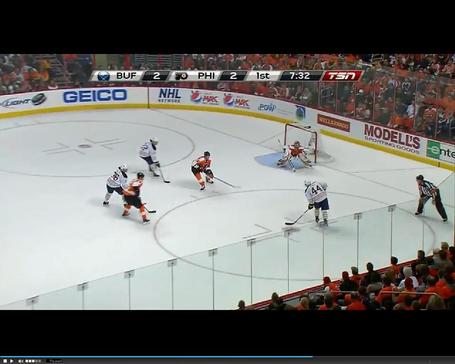 He also misreads the shot, covering the lower-middle section of the net as the shot hits the water bottle. It was a good shot that he might not have stopped in any event, but he wasn't even close.

Blame points: Three for Briere for creating the 3-on-2, four for O'Donnell for making it a 3-on-1, and three for Bob for guessing so badly on the shot.

The fourth video can be found here.

The key to this play happens before the video starts. The Flyers elect to start the second period with their fourth line and their third pairing against the fourth line of Buffalo. Over the next 90 seconds, both teams change up their forwards and Buffalo changes up their defensemen, but despite at least two forays into the Buffalo zone, Meszaros and O'Donnell are still on the ice when the Flyers get called for icing at 18:23.

The Flyers win the faceoff but still don't get a change, and when we pick things up here Meszaros and O'Donnell have been out there for two minutes. 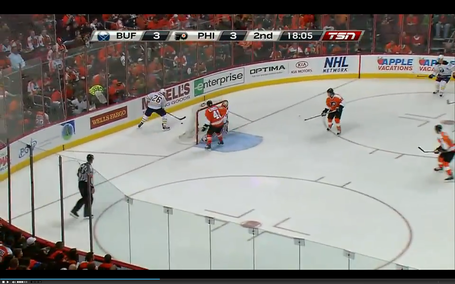 This looks relatively innocuous, but Meszaros' tired legs really hurt here. If he steps up on Vanek, he can force him into Giroux and the play likely ends there. Instead, he stands in that exact spot for the next five seconds, covering nobody and doing nothing. Giroux forces Vanek back, Carter picks up Pominville, O'Donnell covers Connolly, but JvR is floating and Meszaros is resting, so neither defenseman is covered.

Butler on the near side is the one who makes himself dangerous, exploiting Meszaros' lack of energy. 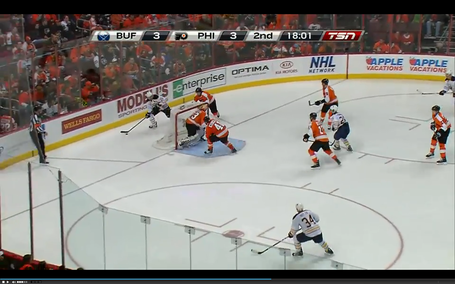 Butler is in a dangerous spot when he receives the puck, but Boucher stays tall, doesn't give him much net to shoot at, and stops the puck without a rebound.

Blame points: I wish we could see why the defense didn't get off the ice earlier and who iced the puck. But starting from where we are, I'm giving Meszaros three points for not somehow finding the energy to skate one stride off the post and JvR one point for floating halfway between the two uncovered points.

>> Because this article is large and heavy on graphics, it has been broken into a few pages. Click here to continue to the final section. <<