Because this article is large and heavy on graphics, it has been broken into a few pages. This is the third section; click here to go back to the start or back to the second section.

The fifth video can be found here.

The Flyers dump the puck in deep, but Buffalo gets to it and clears it back out. The Flyers get caught in a change, with Timonen going off the ice and Carle coming on, but that's only a small part of the problem here. The real problem is that the person changing is the only defenseman on the ice. JvR was playing a point on the power play and is now the only person back, and he mishandles the play when the Sabres cross over. 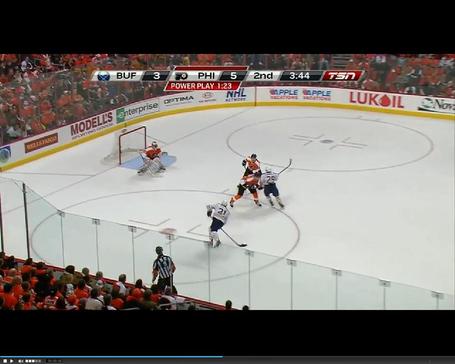 JvR stays with Pominville, leaving Carle unable to help and leaving Stafford wide open for both the shot and a whack at a rebound before he finally gets back into the play.

Blame points: Three for JvR for getting taken out of the play so easily, four for Laviolette for having only one defenseman on the ice with a two-goal lead and then getting caught with that one defenseman changing. As an aside, I'm getting pretty darn tired of talking about blown coverages on Pominville and company.

The sixth and final play can be found here.

This one starts with a line change to put Hartnell, Briere, Coburn, and O'Donnell on the ice for the last few seconds of Timonen's penalty. Buffalo gains the zone easily during the change and the key moment is here. 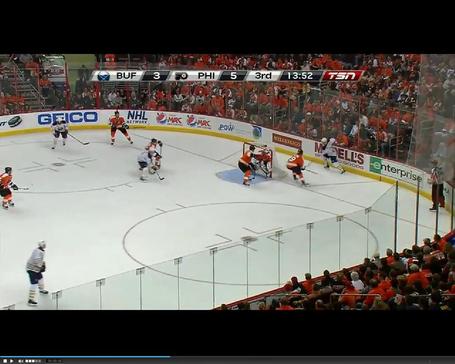 This looks relatively innocuous until you notice which players are where -- the importance of the job is in direct inverse proportion to the defensive skill of the player doing it. Hartnell is the one pressuring the puck behind the net. Briere is the one covering the guy driving to the net. O'Donnell is the safety in front of the net. Coburn is out at the boards and Timonen is covering a point.

From here, Niedermayer goes out wide on Hartnell and gets room to throw it to the 6'3", 215 lb McCormick, who is bullying Briere (5'10", 179 lbs) practically through the net as O'Donnell stands a couple of feet away and gives Briere disapproving looks.

Blame points: Three points for Laviolette for the line change -- O'Donnell was unavoidable with Timonen in the box, but it's asking for trouble to put Briere and Hartnell out as the puck is going into the Flyers' zone, shorthanded, with a lesser defensive pairing behind them. I'm only giving Briere two points because he was on the right man and trying hard and shouldn't be put in a spot where he has to body up on a guy who's 36 pounds heavier (although my sympathy doesn't extend as far as letting him off the hook altogether when he gets abused like that). One point for Boucher, who couldn't stop the shot but did have a chance at deflecting the pass. And three points for O'Donnell for both failing to defense the pass and failing to provide help with McCormick.

>> Thanks for reading. Click here to return to the comments section. <<