Share All sharing options for: Defensive breakdowns in the playoffs, ECQF Game 2

And now, we continue our look at where to place the blame for the defensive breakdowns in the playoffs. You can find a detailed analysis of the first playoff game here.

Game 2 against Buffalo was a 5-4 win that featured six shots that I counted as being dangerous -- you'll notice that four goals on six dangerous shots is not a great ratio, and you may recall that Bobrovsky got put in detention for this performance. After the jump, we'll see how much of it was his fault.

The video for the first chance against can be seen here, or hopefully the embedded video below will work.

The first question is why Hartnell is on the ice on a PK -- his bad roughing penalty was followed by a questionable hooking call on Timonen, and the video starts just after the 5-on-3 ended and Hartnell rejoined the play.

The Flyers recover quickly after a shot goes behind the net and gets thrown back up the boards, and we start from this spot with everyone in good position. 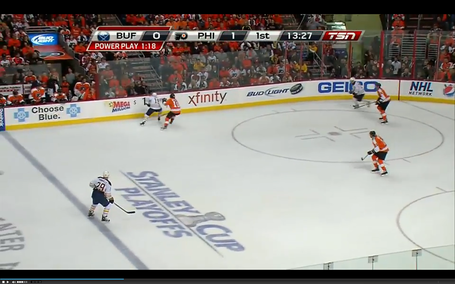 From here, Hartnell drops his stick and Coburn then comes to help along the boards. Meszaros then feels compelled to follow his man into the area Coburn has just vacated along the far boards, and when Betts drifts over too, we reach this moment, where the Flyers have all four skaters to the right of the right faceoff dot: 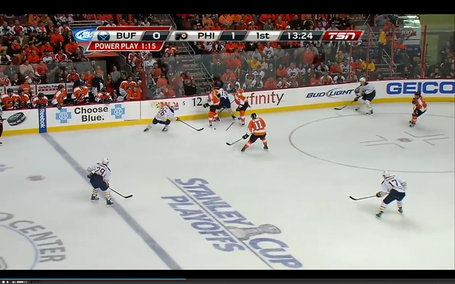 Hartnell: "This seems like a good time to fall down."

This situation is already dangerous, and a series of mistakes in the recovery are about to make it a lot worse. Hartnell falls down over Vanek's stick and takes four seconds to get back up, during which time Vanek goes to the net uncovered. After Hartnell goes down, the puck comes across the ice to a wide-open Gragnani. Meszaros hustles to get back to Gragnani, and Betts mistakenly follows him there instead of picking up Pominville. 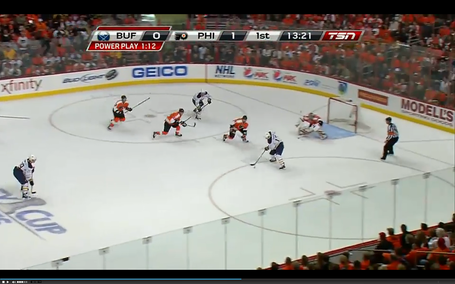 Seeing his teammate all alone, Gragnani dishes it back to Pominville. Again, both Meszaros and Betts chase the puck; this time Meszaros is the one leaving his man to do it. The play becomes comically absurd as they knock each other down and Pominville fans on the shot. The comedy becomes tragedy when Gragnani decides to give Vanek a try this time and Vanek buries it into the wide-open net.

Blame points: One for Timonen for being in the box. Two for Hartnell for dropping his stick to start all this and lying on the ice through most of the rest of it. Betts and Meszaros each get four points for their terrible positioning throughout the play. No blame to Coburn, who earnestly covered the right man amidst the chaos. No blame to Bob, who had no chance.

We start the next one on the PK again, this time with Powe in the box for a borderline cross-check call. First, video of the play.

This is by far the toughest one for me to assign blame on so far. The initial set-up has Coburn and Timonen covering men down low, Betts pressuring the puck, and Versteeg covering the man at the near boards. When Buffalo wheels it back to the far boards, we get to this critical point: 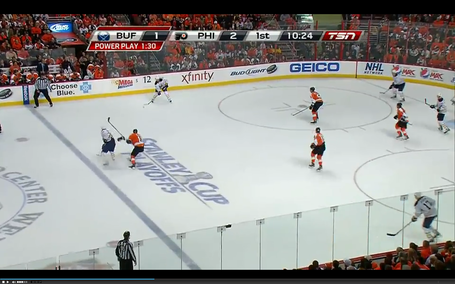 The pass has shifted the 2-on-1 from being Pominville and Connolly up top against Betts to Connolly and Stafford on the wing against Coburn. I actually think Coburn has pretty good positioning here -- Connolly doesn't have much of a lane and Coburn can recover to Stafford if necessary. But as Connolly winds up, Coburn skates towards him, and in pressuring the puck he makes Stafford dangerous.

The pass comes to Stafford, and Timonen comes to help. His slide will usually wipe out the threat, but Stafford has enough space to pull off a nice toe drag and get off a shot that Bobrovsky stops. Coburn gets back and plows into Stafford, but Vanek gets control of the puck and and before Betts or Versteeg can get to him, he gets a couple of whacks at the puck and pokes it past Bobrovsky.

Blame points: This is our first goal that wasn't the result of catastrophic breakdowns -- Buffalo just made good use of small advantages. A point to Powe for being in the box. Two points to Coburn for opening Stafford up more than he needed to. Two points to Timonen for getting so cleanly beaten by Stafford. And two points to Bobrovksy -- I don't really expect him to stand up to two men whacking at him from a foot away for very long, but I think he was too passive here; there were opportunities to poke the puck away or to cover it.

>> Because this article is large and heavy on graphics, it has been broken into a few pages. Click here to continue to the next section. <<