Share All sharing options for: Defensive Breakdowns in the Playoffs: ECQF Game 3

This is part three in a series in which we do an eye-test analysis of the defensive issues the Flyers had in the playoffs. We're going through the dangerous shots the Flyers faced, breaking down the plays, and assigning blame to the players who didn't carry out their defensive responsibilities. This lets us see how much of the struggles was due to the skaters, the goalies, or the coaching staff.

In this article we look at game three against Buffalo; here are links to the previous analysis of Game 1 and Game 2. Game 3 was a 4-2 victory in which some might say Boucher stole a win -- until a late empty-netter, the Flyers had clung to a 3-2 lead through the whole third period despite being outshot 37-24 in the game and 11-3 in the third period, earning Boucher star of the game honors.

After the jump, we look at how Buffalo's scoring chances came about.

In this game, Buffalo had a whopping 11 shots on net that I identified as being dangerous. I thought hard about paring the list down a bit. Not all of these 11 chances were extremely dangerous and not all of them were the result of huge breakdowns, but I do think all of them were legitimate scoring chances. So I decided to leave them in, but it doesn't affect the results all that much -- the less dangerous chances that arise from smaller mistakes typically don't result in very many blame points.

To handle that many shots, I'm going to have to change the format of this breakdown a little. This page is basically a master index; it has links to separate pages for each of the shots and the overall blame totals. I'll also put the analysis of the first shot on this page, so that you can see what this is all about and decide whether you want to click through to the individual shots or just skim down to the totals.

So without further ado, here's video of the first shot from a scary play:

This play begins in the middle of a line change. Carle brings the puck up the ice, but it gets poked away by Gaustad and Carle has to circle back. This is fine, as it gives the team a chance to complete the line change.

Honestly, when I watched it live, and again in my first pass through the video, I was ready to hang this one all on Carle. But let's look at what options his teammates give him here. As he's backing up and looking for an outlet, his three teammates all cluster around the single forechecker. 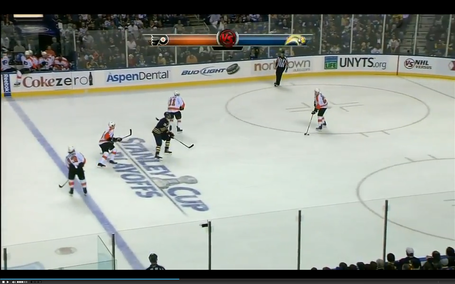 As he is backing up, his teammates continue not to make themselves good passing options -- they stay in a straight line behind the forechecker. 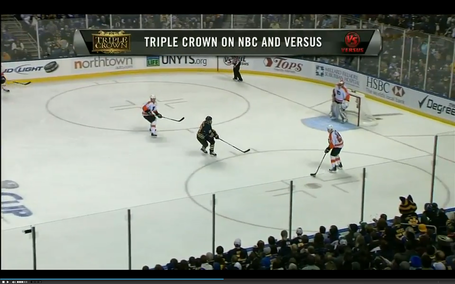 Eventually Carle runs out of room and has to try a pass. This is where he makes his mistake -- this should go behind the net for safety, but it doesn't, and Gaustad gets his stick on it. It deflects to the corner, Gaustad retrieves it and brings it back to the net. 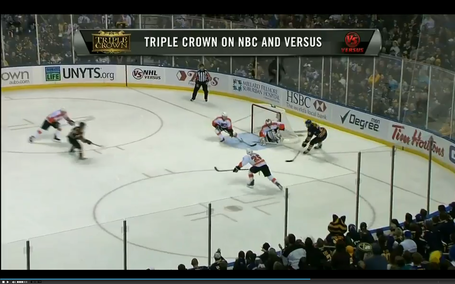 This play was borderline for inclusion in the analysis, but this frame is the reason I counted it. With Carle struggling to recover, Syvret falling down, and Betts a step behind Gerbe, this is a legitimately dangerous moment. Fortunately, Gaustad tries to lift it over Boucher and only gets it into his chest; a pass to Gerbe would have really tested Boucher, and even just banking it off of Syvret might have been possible, but the shot at the net was eaten up by a well-positioned goalie.

Blame points: One each to Betts and Syvret for not making themselves better targets. One to Carle for the dangerous pass. I have the hunch I'd be dishing out a lot more points if Gaustad had sent it to Gerbe, but as it happened this one was never really that big a threat.

Here are links to the analysis of the other ten chances from the game:

The total number of chances here is a bit deceptive. There were more dangerous shots than in previous games, but the number of Major Breakdowns was about the same -- the difference was in a proliferation of situations that could have turned disastrous but didn't. Overall, the total number of defensive blame points awarded was about the same as Game 2, twice as many as Game 1. Here's the table of results to date.