Share All sharing options for: Defensive Breakdowns in the Playoffs: ECQF game 3 chances 2-3

This is the second part of our look at how the most threatening chances emerged in game 3 against Buffalo. This article started here and continues here.

Let's start the second chance of the night by talking about what happened before the video starts. With 10:19 left in the period, Laviolette sends the fourth line out for their fourth shift of the night -- as many as Richards or Giroux and more than Briere to this point. With 10:08 left in the period, Buffalo's shot gets covered and the Flyers are looking at a defensive zone draw. Meszaros and Carle have just finished their shift and need to be replaced.

It's on the road, so we don't know who Buffalo will put out there. So to play it safe, the Flyers decide to put a solid pairing behind the fourth line for the defensive zone draw -- they go with...erm...O'Donnell and Syvret. Tell me that doesn't sound like a recipe for an interesting shift.

Buffalo wins the face-off, gets a quick shot on goal, and there's another stoppage. Laviolette realizes that he needs a better defense out there, so he pulls Carcillo and puts in...erm...Briere. Ah Laviolette, you mad genius.

Here's the video of the second chance.

Buffalo wins the faceoff and the video starts soon after, with Betts chipping the puck forwards but not quite out. Myers gets to it before Powe and threads it through to Boyes. He can't handle the pass and it comes through to O'Donnell. 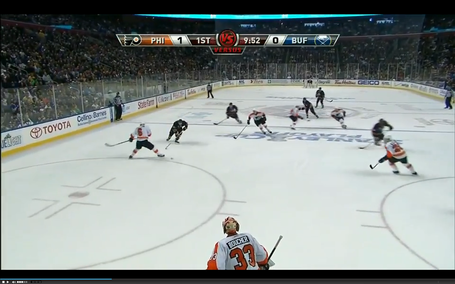 O'Donnell kicks it -- not onto his stick, not to the boards, but towards Betts in the center of the ice. Betts goes to sweep it to the boards but fans on the bouncing puck, leaving a gift for McCormick. 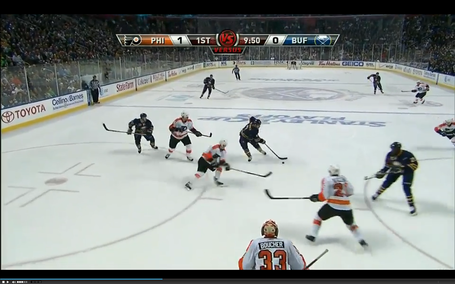 Betts sticks with this play as McCormick gets off a shot that Boucher redirects to the corner, but eventually has to take a second for a good facepalm about the way this play has gone so far. 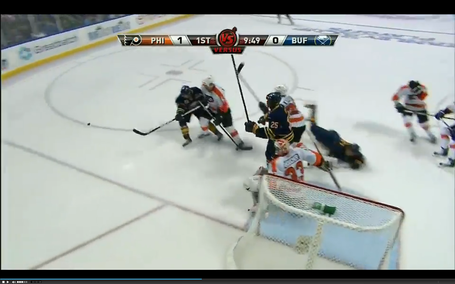 The puck gets sent out to the point, reversed around, and Grier gets lost in the shuffle, leaving him open for this pass. Also apparently lost is Briere. 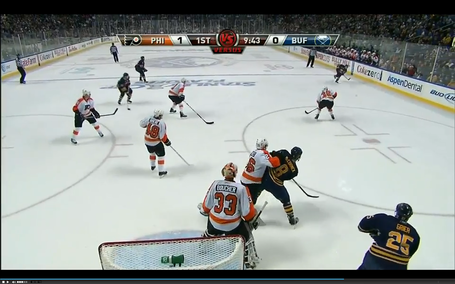 As the pass comes out to Boyes, three Flyers prepare to fix bayonets and mount a charge. Meanwhile the three Sabres debate about who has the best shot, and Syvret gets down on his knees and prays. 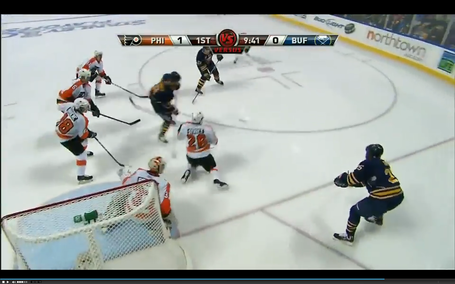 Boucher stops the ensuing shot and the threat ends there. Honestly, like on the first video, this one wasn't incredibly dangerous, but I included it because it did feature two separate situations of some danger and because I felt that even if they got away with some of the mistakes, there were plenty of mistakes here. So again, like on the first one, the blame point total will be relatively low, but it could have been much worse.

Blame points:  Two to Laviolette for setting up with such a weak squad for a defensive zone draw. One to O'Donnell for kicking the puck to the middle of the ice and one to Betts for missing it. One to Briere because his random floating disrupted the coverage and made the second chance possible.

In the third one, the Flyers are on the penalty kill because of a borderline interference call on Coburn. Here's the video.

We'll pick this one up with the Flyers having good coverage: 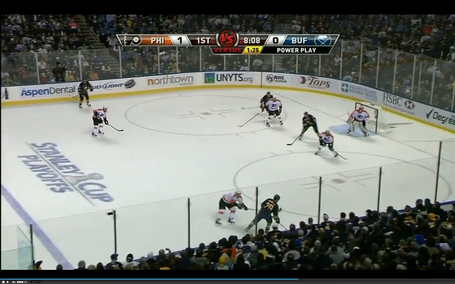 Meszaros loses his man, but Richards is there to cover the open space in the center of the ice. In this picture, you can see that Richards is about to blow up Stafford as soon as he receives the puck. 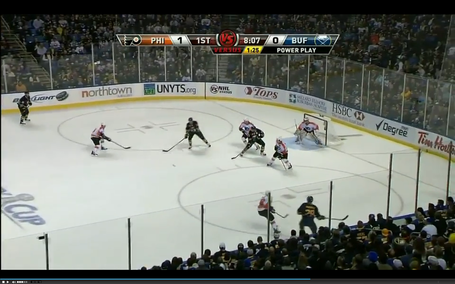 Only for some reason, Richards doesn't. Instead, he goes behind Stafford, apparently hoping that for some reason Stafford will miss the puck that's right on his tape. 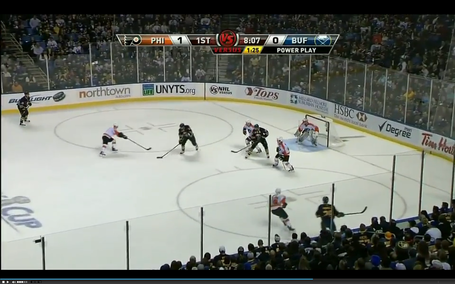 Stafford does not miss the puck, and Richards now ends up horribly out of position, with Stafford wide open. 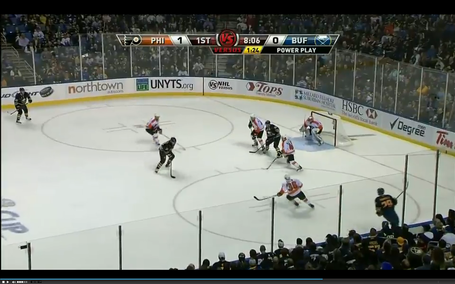 Stafford labels a shot into the top corner of the net and Boucher has no chance.

Blame points: One for Coburn for being in the box, four for Richards for shying away from contact when he had an easy opportunity to neutralize the play. I'm open to discussion on Meszaros, but given that a) Richards was there to pick up his man, and b) he was picking up Timonen's man to free Timonen to pick up the puck carrier if he brought the puck down low, I don't think he gets any blame for releasing his man when he did.