Share All sharing options for: Defensive Breakdowns in the Playoffs: ECQF game 3 chances 4-5

This is the third part of our look at how the most threatening chances emerged in game 3 against Buffalo. It started here and continues here.

In the fourth chance of the night, Stafford carries the puck up the ice, gets a bad angle shot that Boucher sends behind the net, and suddenly it turns scary.

Here's video of the fourth chance.

Stafford's rush is covered quite well. O'Donnell can't negate Stafford, but he keeps him wide and doesn't give him space for a shot until the angle is pretty bad, and at this point there is good coverage all around the ice. 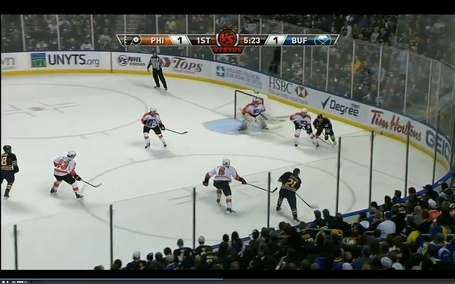 Boucher is very big in the net but exposing a lot of 5-hole. That's where Stafford shoots, and Boucher closes it down well and directs the rebound behind the net. Coburn has been tracking Gerbe all over the ice up to now, but when this rebound gets by him, Gerbe slips away from him with the puck. 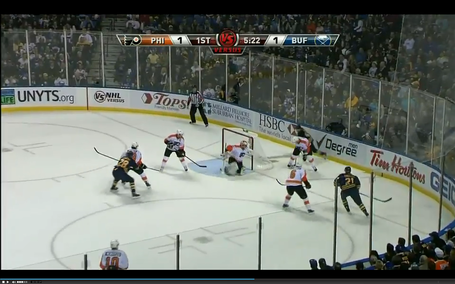 There's still no imminent danger here, but there's about to be. As Gerbe comes across, Zherdev peels off of Gaustad to cover the lane to the point. Richards is right there to pick Gaustad up, but he doesn't react and neither picks up Gaustad nor stops Gerbe from coming around the net. And so we quickly reach this much more dangerous spot, in which you can see the puck coming past Richards to Gaustad. 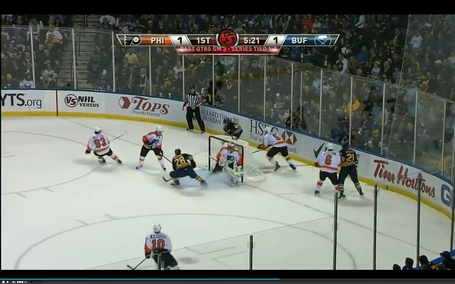 Boucher gets across and smothers Gaustad's attempt to bang it in, which interestingly is recorded in the play by play as a wrist shot from nine feet out.

Blame points: One point to Coburn for losing his man after the initial shot -- I think the rebound came past him too fast to expect him to get his stick on it, but I'd like to see him react fast enough to not completely lose his man. Four points to Richards, who had three good options -- tie up Gaustad, get a stick down to block the passing lane, or step up into Gerbe and pin him behind the net -- and stood flat-footed through the whole play. One point to Zherdev, because watching Richards stare behind the net the whole time, I have to assume Zherdev didn't communicate well enough that he was leaving Gaustad.

And on to the fifth chance, which starts with Hartnell in the box for four minutes for interference and delay of game. Here's the video.

This play is completely innocuous up until the point where Ennis brings the puck wide. 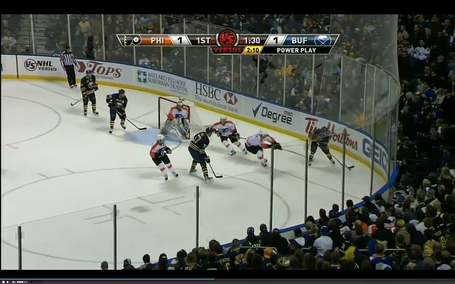 At this point the Sabres have four guys well below the faceoff dots, and the Flyers' defense is compressed to cover it. Ennis reverses the puck.

Compare the coverage on the near side, with three Flyers compressed down low, to what happens when it swings to the far side -- Richards peels off to cover the point, O'Donnell is struggling to get back from the corner he chased Ennis into, and Giroux is too high. This leaves Meszaros with a 2-on-1 right by the net. 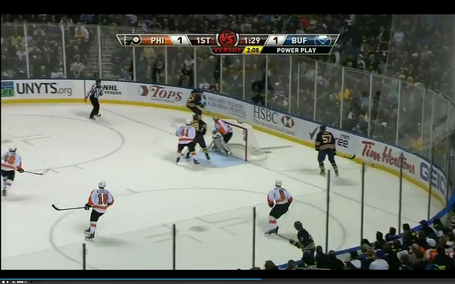 Meszaros leaves Gaustad in front of the net to pressure the puck, but there is nobody to fill in behind him and when the puck gets through him, Gaustad is alone with Boucher. 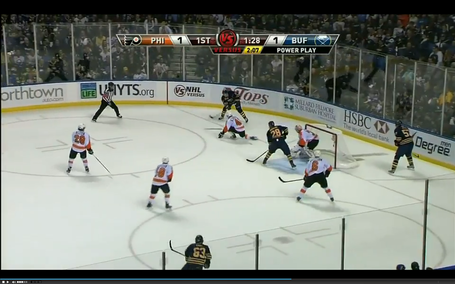 Fortunately, Boucher is up to the task. Gaustad gets two whacks at it before it comes to Boyes, but Boucher has good coverage and the puck ends up behind the net, defusing the chance.

Blame points: When you're a man down, there is always going to be an open man somewhere, but you try not to have it be a guy with the puck in the crease. Two points to Giroux for being up too high -- if he is six feet lower, he can be the one to pressure the puck and Meszaros will stay home. Two points to Meszaros for letting the pass get to Gaustad -- with the puck where it is, he can either stay home or pressure Boyes, but if he leaves Gaustad he can't let the pass get through.