Share All sharing options for: Defensive Breakdowns in the Playoffs: ECQF game 3 chances 6-8

This is the fourth part of our look at how the most threatening chances emerged in game 3 against Buffalo. It started here and continues here.

The sixth chance comes a minute later, with Hartnell still in the box. Here's the video.

I'm not going to assign any blame on this one -- Powe was close enough to Stafford to rush the first shot and send it wide, then an unfortunate bounce brought the puck right to Gragnani. He hit a powerful one-timer from inside the dots, but Boucher answered the challenge. I do think this was a dangerous play, but the only significant error was by Hartnell, who already got blamed for his penalty on the last one.

So let's move on to the seventh chance.

We'll pick this one up here, with Carle having just sent the puck over to Syvret. You can see that Boyes' momentum carried him past Carle, and that if Syvret sends the puck right back to Carle, Carle can carry it into open ice and find the breakout pass. 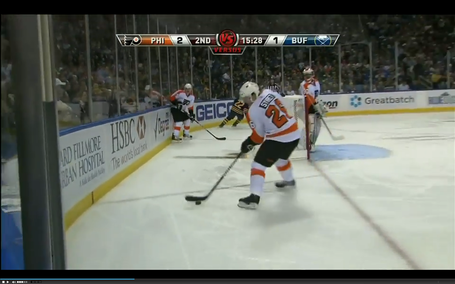 Instead, Syvret backhands it up the boards to Leino, who has nowhere to go with it. The cross-ice pass in front of the goal would be dangerous and none of his teammates on the near side are making themselves targets. 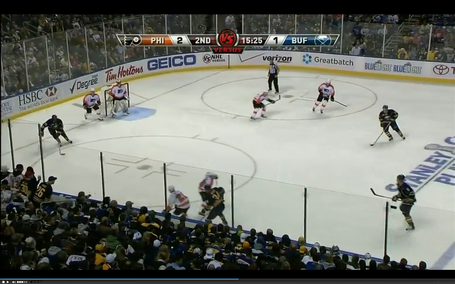 Leino's best play here would be to send it up the boards and out. The Flyers' positioning (and up-ice momentum) is dangerous, and just getting a clear is the best play here. Instead, he dumps it down into the corner -- perhaps he was hoping to get it around to Syvret, but he didn't. The puck goes to the corner and the Flyers make the transition to defense. 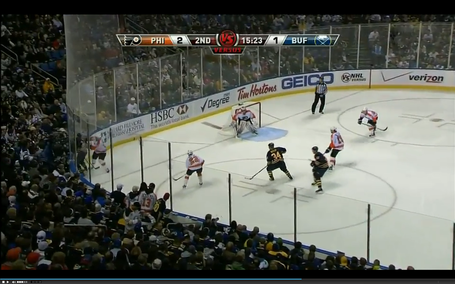 Everything is OK here except for one thing. Leino should be taking away the passing lane to Butler, but to do that he needs to have his stick on the ice in front of him. Skating with his stick at his back knee, he has no chance to stop the pass. He may have recovered in time to interfere with Butler's shot; I'm not sure whether Leino got his stick in there or whether Butler just didn't get everything on it, but Boucher easily handles the weak shot.

Blame points: I do think Syvret does better by giving it to Carle than to Leino, but the difference isn't enough for me to give him a blame point. He gets off with just a scowl and a warning to tighten it up. Leino gets two points -- one for not clearing and one for not making a better effort to stop the pass, but he escapes a third because I think he did help defuse Gragnani's shot.

And on to the eighth chance, which you can find here.

Once again, I'll refer to the clip in game one where the Flyers had two people below the goal line and so Richards immediately peeled back to help the defensemen as Buffalo regained the puck. With two forwards below the goal line here, look where Zherdev is: 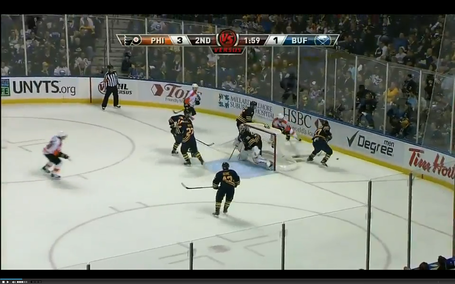 And now watch him skate forwards for another three seconds to deliver a hit in the corner and put himself irreparably far behind the play. 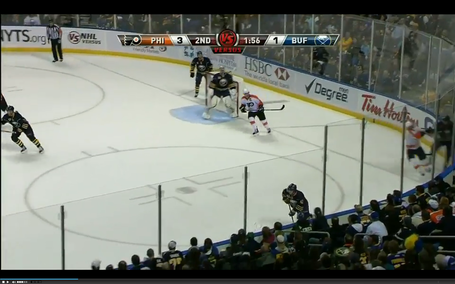 This gives Buffalo a free skate up the ice and the space for Gragnani to put this wrist shot on net: 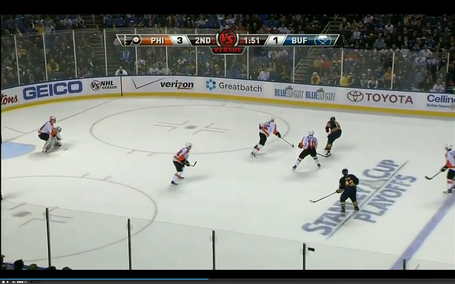 Connolly's shot is waffle-boarded away (tee-hee) by Boucher. The shot wasn't all that great, and from that distance, I think Boucher should have been able to absorb it with the body or direct it to the corner, but unfortunately he mishandles it and puts it right on Gerbe's stick. On Gerbe's shot, Syvret may have obstructed Boucher's view a bit, and the puck goes over his glove arm and in.

Blame points: Two for Zherdev for the irresponsible hit that started the play for Buffalo. Five for Boucher for first offering up the big rebound and then getting beaten by the second shot.