Share All sharing options for: Defensive Breakdowns in the Playoffs: ECQF game 3 chances 9-11

This is the fifth and final part of our look at how the most threatening chances emerged in game 3 against Buffalo. It started HERE.

The ninth chance starts with the teams at 4-on-4. Here's the video.

When we pick this one up, Buffalo has established possession in the offensive zone after a clean win of the faceoff, but the Flyers defense is in position. 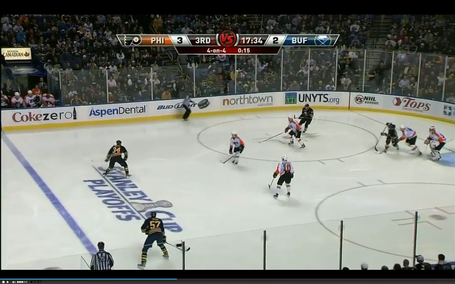 Things look pretty innocent here. Butler hits a slap pass that goes through Meszaros to Boyes. Meszaros then turns the wrong way, towards the boards, as he tries to locate his man, allowing Boyes open space to slide right towards the net for this shot: 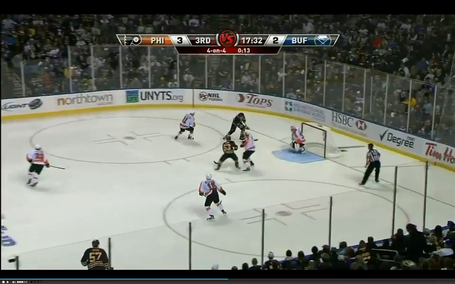 Boucher makes the save and Coburn clears the rebound -- this is yet another clip where Coburn is in the right place and winning his battles, I'm really impressed so far.

Blame points: Three for Meszaros. I'll admit that this feels a little harsh, but aside from losing a faceoff, everyone else on the play did their job. Boyes got a point-blank shot because he was able to stop the puck that Meszaros couldn't, and that shot was uncontested because Meszaros turned away from him when the pass went by.

The tenth chance can be seen here.

This one starts with a lengthy board battle down low, and the play develops quickly once that ends. Myers carries the puck up the ice and Timonen goes with him. Zherdev goes back up to cover the point. Versteeg takes a moment to relax and enjoy the view. 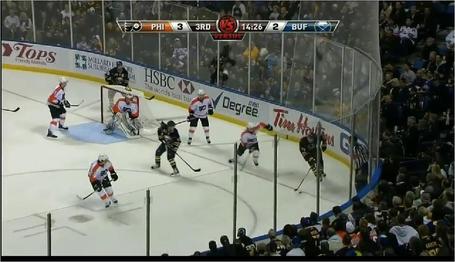 And he does have a pretty nice view of Ennis as he receives the pass, turns, and shoots. Fortunately for the Flyers, Ennis seems not to have realized just how much time and space he had. He puts it on Boucher's far pad, but Coburn neutralizes his man and Richards sweeps the rebound away.

Blame points: Four for Versteeg for a complete lack of effort. Three full seconds pass between the board battle ending and his man taking the shot, and while his man skates to the dot, receives a pass, turns around, and shoots, Versteeg doesn't even cross the goal line. Yet another piece of evidence that Richards doesn't deserve the C -- one of Datsyuk's wingers would never play like that.

Oh, and by the way, Buffalo's scorekeeper listed the Flyers forwards for that play as being Betts, Powe, and Carcillo. Come on, guys. Are you even trying?

And on we go to the eleventh and final chance of the night.

This one starts off 5-on-3 because Zherdev took a borderline slashing call and then Powe had a bad charging penalty, giving Buffalo 1:15 of 5-on-3 time to try to tie the game. 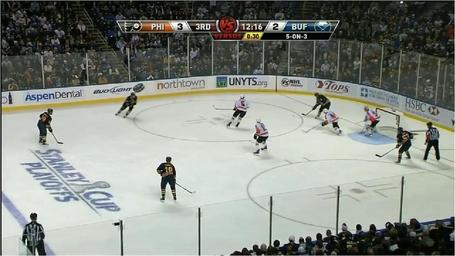 After a couple of passes on the perimeter, things get dangerous when the puck comes down low to Vanek. Timonen sees the danger and is going into a slide already.

Vanek one-times a pass and gets it by Timonen before he gets down. Boucher moves very quickly -- he already has a foot on the near post when the puck gets to Ennis, and when the pass isn't exactly on his tape, Boucher gets all the way across and stymies him, much to the dismay of the Sabres fan in the Myers jersey at the bottom of the screen who is guilty of premature celebration.

Thanks for reading. Click HERE to return to the first page to see the overall point tally and leave comments.