During the playoffs, Geoff diligently tracked zone entries, noting who brought the puck into the offensive zone and by what means. After his first game, we looked at what we could do with this information, and after his second game we looked at which results varied from game to game and compared Philadelphia to Buffalo.

Then we quieted down on it for a while, wanting to collect a bigger sample set and have more of a sense for which aspects were reproducible before reading too much into it. Unfortunately, our sample set won't get any bigger until next year, so it's time to take a look at the 8 games we have (4 vs Buffalo and 4 vs Boston) and see what we can learn from this data. This is part one of that review.

Who controlled the neutral zone?

Having more zone entries than your opponent at 5-on-5 means that more often, when the puck was in the neutral zone, your team was able to control it and advance it into the offensive zone. How well did the Flyers do that? Very well -- they got 52.1% of the zone entries. 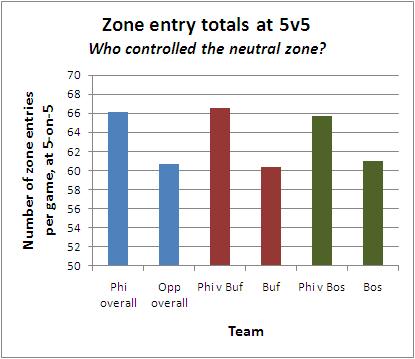 Could there be a score effect at work here? The Flyers were 2-6 in the eight games analyzed, and I could imagine that a team that's leading might not contest the neutral zone as much. Let's compare the Flyers' 52.1% zone entry overall total to how they did when the score was close or tied. 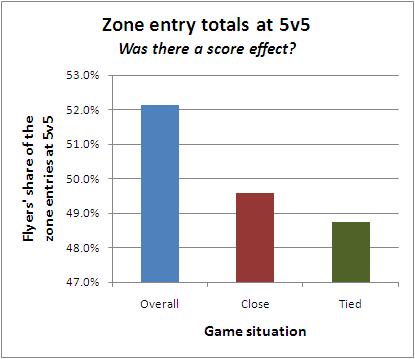 It sure looks like there's a score effect strongly influencing these results. It's been established that teams take fewer shots when they are leading, and at least in this sample that seems to be largely the result of conceding the neutral zone (more direct evidence of this is below). The result is that the overall totals here give us the wrong answer; the Flyers got 52.1% of all zone entries, but only 48.7% when the game was tied -- in other words, they got outplayed, fell behind, and then got extra zone entries because of score effects.

Who was more effective in the offensive end?

Winning the neutral zone battle to get the puck into the offensive zone is one thing, but teams still need to generate shots once they're there. How well did the Flyers do that? Not very well; both opponents did more with each chance than the Flyers did. 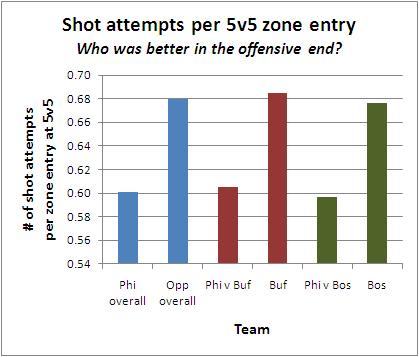 However, there could be a score effect here, too. If teams with a lead pass on their least dangerous offensive opportunities (resulting in the zone entry effect seen above), then the times that they do bring the puck forwards will generate more shots per entry. Let's see how the data looks. 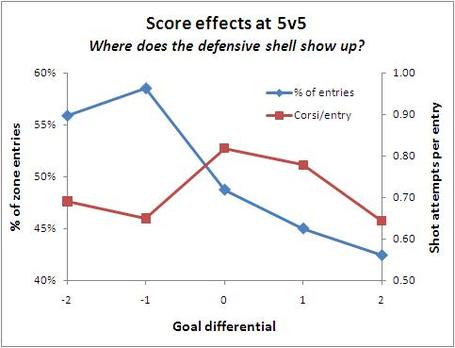 This plot shows how the Flyers' share of the zone entries (blue curve) and shots per entry (red curve) change as a function of the current score. The blue curve indicates that the Flyers' percentage of the zone entries was very tightly linked to the score, with the team getting more entries when trailing and fewer when leading. However, the red curve doesn't show any clear trend for an impact of the score on the shot attempts per zone entry.

In other words, it looks like the defensive shell involves not getting too aggressive in the neutral zone, but when a team has a chance to bring the puck forwards, they will still press the advantage and try to get their shots. So score effects left their zone entry total looking artificially inflated, but the attack zone issues -- giving up about 12% more shots per entry than they got -- were real and not a simple function of situation.