Zone Entries: Comparing Dump and Chase to Carrying the Puck

Share All sharing options for: Zone Entries: Comparing Dump and Chase to Carrying the Puck

During the playoffs, Geoff started tracking zone entries for us. This is part 2 in a series where we look back at the body of data collected to date and assess what we can learn from it. In part 1, we looked at the team-level totals for entries and shots per entry to see which teams were winning the play in each zone.

In this part, we look at how the team brought the puck into the zone and what impact that had on the results.

How did teams bring the puck into the offensive zone?

We tracked five different types of entry -- teams can enter the zone by dumping the puck in, carrying it in, passing it in, tipping it in, or miscellaneously other-ing it in. However, I'm nervous about breaking eight games' worth of data into that many categories, so for now I'll segregate into two types: controlled entries, where the team carries or passes the puck in without losing control of it, and uncontrolled entries, where they dump or tip it in and then try to recover it. (Remember, dump-and-change plays where no real effort is made to recover the puck are excluded from this analysis.)

So which teams tended to control the puck as they entered the offensive zone at 5 on 5? 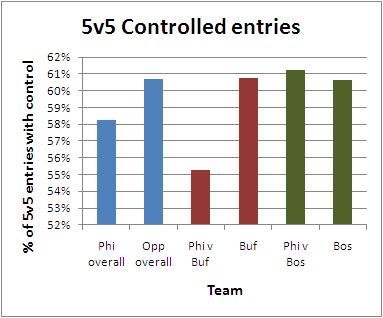 What stands out at me is that three of the samples (Buffalo, Boston, and Flyers vs Boston) were very similar, while the fourth (Flyers vs Buffalo) was markedly different. I see three simple ways to account for this.

Option 1: Maybe the defense's approach is the dominant factor on zone entry type, with some defenses challenging the blue line harder than others. This would explain why Buffalo and Boston both had a similar controlled-entry percentage against the Flyers, while the Flyers were very different in round 2 than in round 1.

Option 2: Maybe the Flyers carried it in a lot more in round 2 by choice -- but given the results of round 2, it would seem that was a bad choice. It could be that they do best when they emphasize responsibility and getting the puck in deep, and they got away from it against Boston and got dominated.

Option 3: Maybe all teams generally carry the puck in about 60% of the time, and the 55% for the Flyers against Buffalo was just an anomalous variation in a small sample size.

Each of these explanations is plausible, but I'm inclined to lean towards the first one. I will show you why I'm less enthusiastic about each of the others.

Could the Flyers' low controlled entry percentage in round 1 be the result of simple variance?

This is actually a pretty straightforward mathematical exercise. Binomial probability expansion tells us that if it's 60-40 that any given entry will be a controlled entry, the odds of having only 147 or fewer out of 266 entries be controlled are only 6.6%. That's high enough to be distinctly possible, but low enough for me to suspect there's a more likely explanation.

Are the Flyers really more successful when they play a lot of dump-and-chase?

There are certainly times when players try to do too much, and those instances stand out strongly in our memories. But the data suggests that carrying or passing the puck across the line is much more effective than dumping it in. 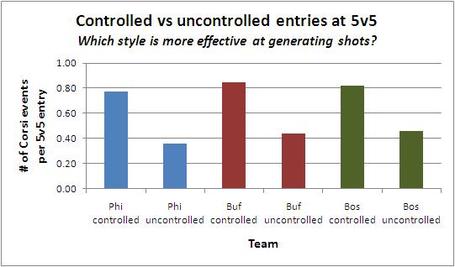 Some things to take away from this chart:

So overall, everyone gets more shots when they carry the puck in than when they dump it in, and that gap was particularly large for the Flyers.

There are other reasons besides shot volume why a team might prefer to dump it in though -- it might help the offense get set up to produce shots from close range or it might help prevent counterattacks. I definitely need to redo the analysis on the complete data set, but in the Buffalo series we found that neither was true, that controlled entries resulted in slightly closer shot distances and roughly the same frequency of counterattacks.

All of the quantitative evidence points to controlled entries being preferred. In addition, I'll add a subjective measure: the two games where the Flyers had the highest controlled entry percentage were game 2 against Boston and game 7 against Buffalo, and I believe those were arguably the Flyers' best games from each series. I just don't see anything here to support interpretation 2 above, since that hinges on the Flyers doing better with more dump and chase and all of the evidence points the other way.

Does the score impact how teams bring the puck into the zone?

This is a subset of explanation 1; the Flyers trailed for most of the Boston series, but didn't trail very much in the games we recorded in the Buffalo series. So maybe part of the explanation is that when a team with the lead concedes the neutral zone, they also make it easier to carry the puck into the offensive zone. 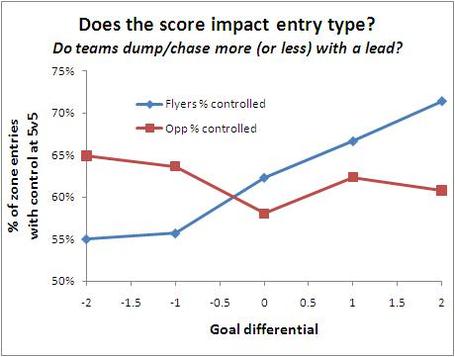 Most of our data has teams bringing the puck into the offensive zone with control over 60% of the time, but the Flyers notably deviated from that with 55% controlled entries against Buffalo. It's possible that this is simple random variance or the result of a deliberate style choice by the Flyers. However, while there isn't really enough data yet to answer this definitively, my hunch is that those numbers are more of a reflection on Buffalo's defensive style.

What does seem clear is that controlled zone entries are to be preferred overall, and the gap in results between controlled and uncontrolled entries is so large that if anything I suspect teams are a little too quick to dump it in when challenged. That's not to say that they should always try to force the controlled entry, but I think the blue line turnover is more frustrating to the fans than damaging to the team. The controlled entry occurs most often when the offense has clearly won the neutral zone battle, but it might not be a bad idea to push a little harder to retain puck control on borderline plays or to back up and try again on some iffy-looking ones.