This is part 3 in a series where we look over the zone entries data collected to date and assess what we can learn from it. In part 1, we looked at the team-level totals for entries and shots per entry to see which teams were winning the play in each zone. In part 2, we looked at how often teams controlled the puck as they entered the zone rather than dumping it in, and how the results of the two entry types compared.

In this part, we wrap up the team-level analysis with special teams data and a quick look at faceoffs.

What is different on the power play?

We know there is more scoring on the power play, but why? Some but not all of the following factors seem to be in play; try to guess which ones mattered most in this playoff run before you read ahead and see what the data shows.

Let's take a look at each of these in turn and see what the data shows. 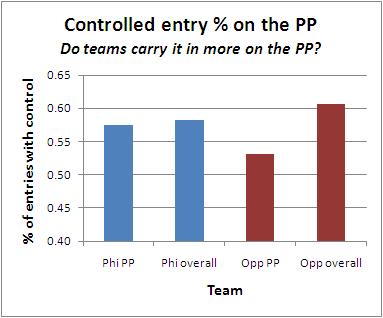 Since controlled entries are generally better than dumping it in, just carrying the puck in for more of the entries would lead to more scoring. However, both the Flyers and their opponents actually had fewer controlled entries on the power play than at even strength -- the margin for the Flyers was tiny, but for their opponents it was substantial. Verdict: Did not lead to increased scoring in these games. 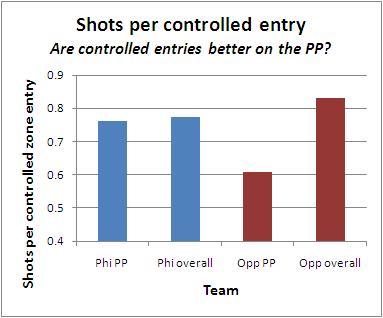 However, we see in this plot that carrying the puck in actually generated fewer shots per entry on the power play than at even strength. (Ed: I just noticed it says "overall" on all of these charts where it should say "even strength". Oops.) Again, the margin is tiny for the Flyers but substantial for their opponents. This suggests that the Flyers PK challenged the blue line much more aggressively and successfully than their opponents -- they prevented teams from carrying the puck in and prevented them from getting off a shot when they did carry it in. But neither team gained the line easily. Verdict: Did not lead to increased scoring in these games. 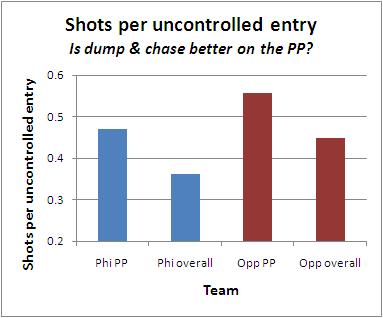 The extra man gives a modest boost to scoring by allowing teams to recover the puck more easily after dumping it in, but the major factor is that they can pass it around until they get a shot from a dangerous location. However, we have seen previously that the difference between a good power play and a bad one is not how dangerous that shot is, but how quickly they can create that dangerous shot.

In the end, this has all been a bit of a trick question. I went into this expecting to figure out what was different about the good power plays -- how much of their edge comes from neutral zone play leading to more controlled entries and how much of it comes from offensive zone play leading to more shots per entry. However, you may recall that the Flyers and Bruins were not exactly models of power play success in these playoffs.

In the games we've charted, we don't have a great power play to analyze -- shot rates on the power play for these teams were scarcely higher than at 5 on 5. That makes looking for the source of extra power play shots in this data futile. What we need is data on a genuinely good power play; perhaps Geoff or some stat-minded Bay area resident can chart a Sharks game or two to help us understand which of these factors go into making their power play so successful.

How dangerous are offensive zone faceoffs?

Everything in the series up to now was about generating offense by bringing the puck into the offensive zone. But sometimes the puck just starts there, and we haven't talked about that yet. We can treat an offensive zone faceoff as another kind of zone entry and look at how many shots the team gets before the puck gets cleared. 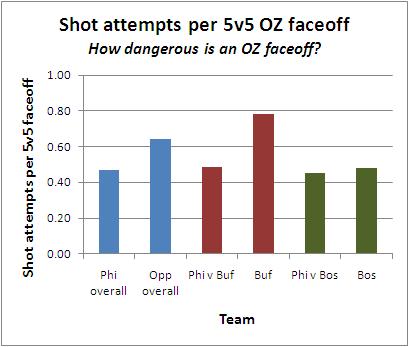 This suggests two things: first, it may imply that dump and chase results in recovery of the puck less than half the time, since teams do better to have the ref drop the puck in between two men. Secondly, this is a reason to take a shot whenever you get a reasonable chance -- having it covered by the goalie or deflected into the netting for an offensive zone faceoff is much better than risking a clear.

It's also worth noting that Buffalo was much more effective than either of the other two teams at generating offense after an offensive zone faceoff. There's still some research to do to figure out why -- a simple explanation would be that they won more offensive zone draws, but it could also be a function of personnel or scheme.

Power plays are dangerous because teams are able to get off shots from much more dangerous locations than they do at even strength. However, it's been shown elsewhere that teams have little control over their shooting percentage, so the best power plays are still the ones that generate a lot of those shots. Don't confuse causation with causality; a team that just starts firing shots from the outside won't have a good power play, but within the range of systems and skills that exist in the NHL, the difference between teams is much more about shot total than about shot location or quality.