What jerseys should the Flyers wear in the 2012 Winter Classic?

Share All sharing options for: What jerseys should the Flyers wear in the 2012 Winter Classic?

People have been talking about what uniforms the Philadelphia Flyers will wear in the 2012 Winter Classic, which is a little funny since there hasn't even been an official announcement yet. But nonetheless, we're pretty sure this thing is going to happen, so we can begin to speculate.

There's a fan-created mock-up (although some news outlets searching for page views are trying to pass it off as a legit rumor) going around that's pretty fantastic, and it shows Mike Richards in an altered Philadelphia Quakers jersey.

Personally, I love that look for a Winter Classic, but is it the best the Flyers can do? Let's look at some other potential options.

While we're stuck on honoring old teams that played here not named the Flyers, how can we leave out the WHA's Philadelphia Blazers? They played just one year in town, at the Civic Center, before moving to Vancouver, and in fact, they were never meant to play here in the first place. Originally, they were to play as the Miami Screaming Eagles, but they never had a building to call home there.

And hey, Bernie Parent played for them. 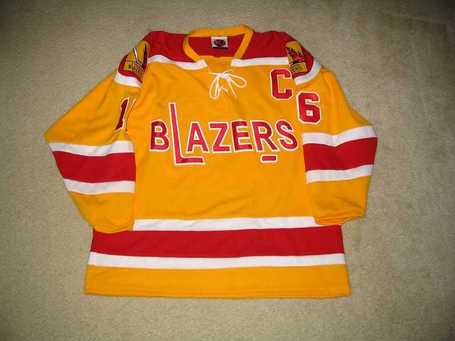 There's a history of the Flyers organization wearing these uniforms, too. Back in 2005, the Philadelphia Phantoms wore replicas of these Blazers jerseys and auctioned them off after the game.

Philadelphia has a much richer hockey tradition than most tend to realize, and it all started back in the late 1920s when the Can-Am Hockey League's Arrows began playing on the 4500 block of Market Street at the Philadelphia Arena.

(Once the Spectrum was built in the late 60's, Philadelphia Arena fell out of favor and eventually burned down in the 80's after a "suspicious" fire. Today, it's a development of townhouses.) 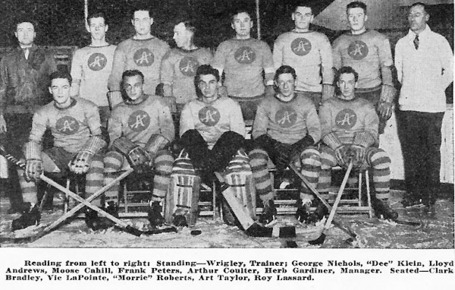 When the Quakers moved to town in 1930, part of the reason why they failed was because the Arrows were more popular. The teams played in the same barn and the Arrows actually won hockey games, as opposed to the NHL's Quakers who were, well... terrible.

How about wearing the jerseys of the first pro team to call Philly home?

Here's where the cool Winter Classic connection could be made. In the final year of the Can-Am League, the Arrows played as the Ramblers, renamed by their NHL parent club -- the New York Rangers. The Ramblers also won Philadelphia's first professional hockey championship that year, in 1935-36. 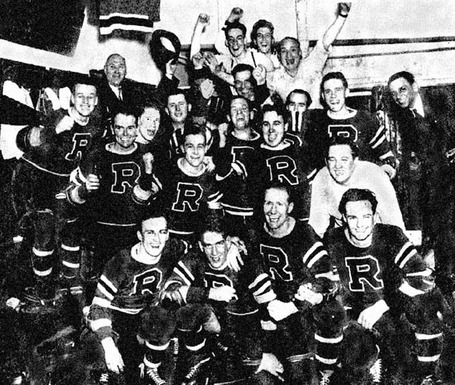 How cool would it be for the Flyers to wear the jerseys of the Ramblers, Philly's first champion, against the team that used to be their parent club? Maybe that's a bad connotation -- the Rangers are the big club -- but it's still very cool from a historical perspective.

The Ramblers folded in 1942 (thanks a lot, Hitler), playing their final AHL season as the Philadelphia Rockets.

The Firebirds played at the Civic Center too, and future long-time Flyers goalie coach Reggie Lemelin played for them too. They played in the North American Hockey League and won the Lockhart Cup Championship in 1975-76, giving the city three hockey championships in three straight years.

They moved to the AHL after the NAHL folded in 1977, and eventually moved to Syracuse in 1979. But damn, they did have some damn fine uniforms. The Phantoms also wore the dark version for a game a few years back. 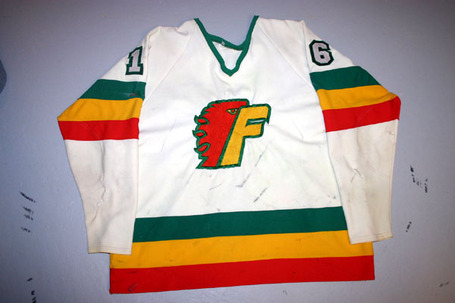 But what about the Philadelphia Flyers?

There are a lot of historical options for the Flyers when looking at possible Winter Classic uniforms, even if we don't have 900 NHL uniform combos like the Pittsburgh Penguins have at their disposal. The problem, of course, is that none of these really have anything to do with the Philadelphia Flyers.

They're all different teams, and in some cases, teams that were in direct competition with the Flyers -- like the Blazers. It's walking the line between the awesomeness of history and the quirkiness of wearing a jersey that doesn't even belong to your team.

The theme of the Winter Classic has been to go retro, but the Flyers face the challenge that no other team has really faced -- they've already done the change to the retro look full-time after the 2010 Winter Classic. They can't just wear the sweaters they wear every game, right?

There is one option that would be ideal to me, though, that's not a historical jersey from some other franchise. 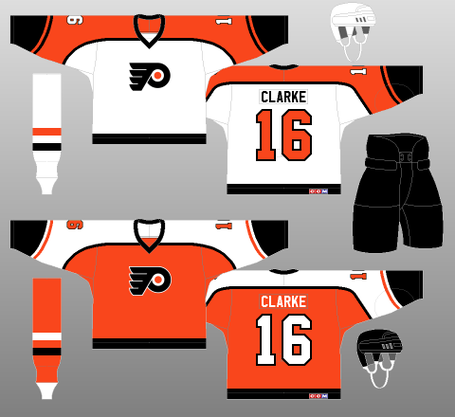 Yes, the orange jerseys they wore in the 80s and 90s. They are by far my favorite Flyers uniforms ever, and while they aren't even that old, they would certainly sell like nothing else. I'd get a Claude Giroux jersey in that style, no doubt.

This has been suggested by a few people, and some have even said that they should add the infamous Cooperalls too. That would be... interesting... but bad news: they're illegal. There's a reason why the Flyers and Whalers stopped wearing them, and it wasn't because they were horrifyingly ugly.

They were dangerous. When you fell wearing Cooperalls, you slid across the ice like you were on a slip-and-slide. Out of control. The NHL banned Cooperalls after the 1982-83 season as a player safety issue. Rule 9.1 in the NHL Rulebook cleary says that "short pants" must be worn by all players.

So, no Cooperalls. Scott Hartnell deserves to live.

Scoop Cooper's great history of hockey in Philadelphia was used in part to put this story together.