How the stats match the eye test

Share All sharing options for: How the stats match the eye test

One of the common questions is why we gravitate so strongly to Corsi when evaluating the way the play is going. I wanted to take a quick glance at the Corsi from last night to show how well it matches up with the typical impression of the game. 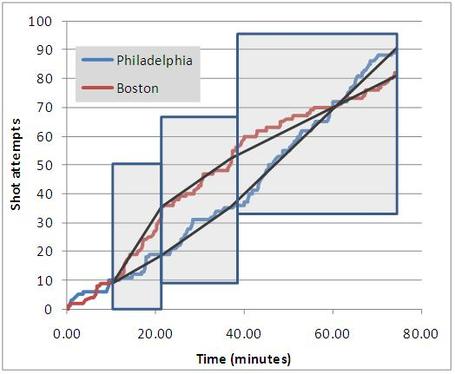 I've highlighted three phases of the game. In the first box, from roughly when the Flyers took a 2-0 lead until the first intermission, Boston really controlled the game. That's how I think most people saw it by eye, and it's reflected in the plot by how Boston's shot total is going up much faster than Philadelphia's is.

In the second box, for most of the second period, the game was pretty even, as reflected by the two teams' shot totals going up at the same rate.

In the third box, for most of the third period and OT, the Flyers dominated the flow of the game, making up the difference in shot totals and ending up with a sizable edge.

This isn't meant to be a post about how the Flyers outplayed Boston and Thomas cheated them out of a win. The point here is to show how the Corsi totals really do mesh up with our eye-test perspectives on the game. When we talk about a team's Corsi score, it's not because getting extra shots is the goal, it's because that shot differential is a good surrogate for valuable aspects of the game like possession and zone time and (in the long run) goal-scoring.