The Flyers were outchanced by the Bruins 13-19, and 11-15 at even strength. They generated two chances on their two powerplays, and allowed four chances while penalty killing. Chances by period were 3-5, 7-8, and in the third where the Flyers needed to push to maintain any chance of winning they were outchanced 3-6.

Daniel Carcillo, Matt Carle and Nikolay Zherdev were the only Flyers to have an even-strength chance differential greater than +1 (in fact they were all +2). Braydon Coburn (-4), Scott Hartnell (-4) and Ville Leino (-5) were the worst skaters for the Flyers, but that's singling out a few from many that were poor.

If you make the jump to the Head to Head even strength chance summary you'll see how Bruins coach Claude Julien was able to exploit the matchups he wanted in Boston's favour.

Apologies for the lame chance recap, but I wanted to move on from this game as I'm sure many of you do. Jump for the charts. 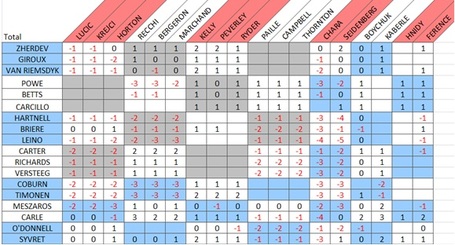