Facing elimination, the Flyers could not break down an excellent Boston defense. The final boxscore credited them with 23 shots, but they only generated eight scoring chances, largely due to the shots coming from outside the scoring chance area. The Bruins on the other hand, were able to regularly get into good positions to shoot and generated a total of 17 chances. Six of those chances came on powerplays, which doesn't seem so inept anymore.

Early in the first period the chances were even, with Braydon Coburn getting two chances for the Flyers. The Bruins then generated the next nine straight chances, including a Milan Lucic powerplay goal. The Flyers would not get another chance until there was ten seconds remaining in the period. The period ended with the Bruins outchancing the Flyers 10-3.

The Flyers outchanced the Bruins in the second 4-2, and tied the game with a 4v4 Kris Versteeg goal with 6:39 remaining in the period. James van Riemsdyk's chance with 4:16 remaining in the second would be the last chance the Flyers would get for more than twenty minutes of hockey as the Bruins took over in the third. The Bruins got five chances in the third, including two goals, while managing to keep the Flyers to the outside in their defensive zone. JVR would get the final chance for the Flyers with 1:09 remaining, but it was far too late by then. The empty net goals weren't counted as scoring chances and to be honest I wasn't paying close attention by the end of the third, but I don't think I missed any chances.

Jump for the charts (if you want, I probably wouldn't, they are pretty depressing). 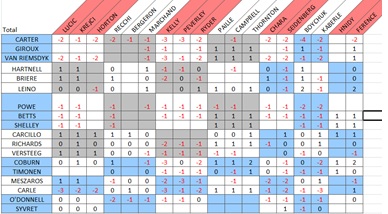