Earlier this year, Geoff wrote an excellent article about what a strong season Jeff Carter was having. Geoff's thesis revolved around the observation that Carter was not merely scoring, but doing it despite taking on tough defensive assignments, going out in the defensive zone against the opponent's best players.

It has become a common refrain on this site, that Carter has matured this year and taken on a much more difficult role, and that it's impressive that we didn't see any slip in his production. I've said as much myself on many occasions.

But I'm not so sure it's true. He definitely did take on challenging assignments, that much isn't in question. However, this may not have been anything new for Carter; I think this year was just the first time we recognized what tough minutes he was playing.

There are two numbers I pay the most attention to when judging how tough a player's defensive assignments were, one that shows where the player started his shifts and one that shows how good his opponents were.

Offensive zone start percentage is calculated by taking a player's offensive zone starts and dividing by (offensive + defensive) zone starts. If it's below 50%, the player is starting in his own end more often than in the opponent's end. A really defensive player will be somewhere around 40% and a really offensive player will be somewhere around 60%. Here's how Carter's zone starts stack up over the last four years in comparison to Mike Richards, who has been a Selke nominee and is often acclaimed as a premier heavy lifter. 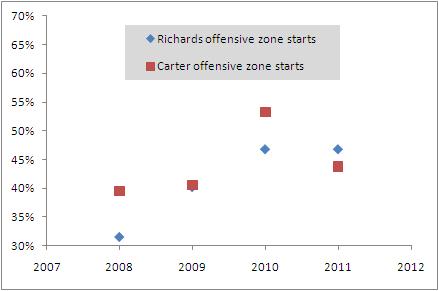 This is the first year that Carter's zone starts were tougher than Richards, but Carter has taken on plenty of defensive zone draws before. Looking at this chart, you wouldn't say that 2011 was a big shift to a defensive role for Carter; you'd say that 2010 was a trial with a more offensive role.

The next question is whether he faced quality opposition. To answer that, the number I turn to is Corsi Rel QoC. The arithmetic behind this metric is a bit complicated, but it basically asks whether his opponents tended to be the best players on their teams at controlling the play and winning the shot battle. I could walk through the math, but I actually think the results are more compelling -- take a look at the defensemen with the highest Corsi Rel QoC on each team:

You can find these numbers tabulated for each team at behindthenet.ca. Corsi Rel QoC so consistently identifies the shutdown pair that I feel quite comfortable with it as a measure of who is used against the strongest competition.

Using this metric, we can now look at how Carter was used in recent years. For comparison, top defensive players will have a Corsi Rel QoC near +1, while really sheltered players will be near -1. 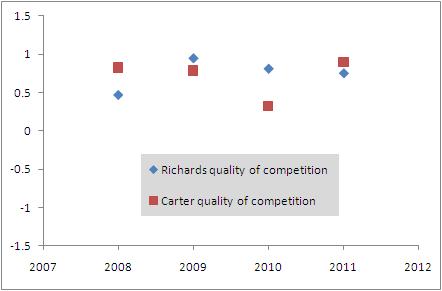 Once again, it's 2010 that stands out as the anomaly for Carter, not 2011. This was the second time that he faced the toughest competition of any Flyers forward, and he faced top-line competition every year but 2010.

In three of the last four years, Carter has been used extensively in his own end against top-line competition. The story here isn't that Carter stepped up his defensive game this year; it's that we're finally appreciating that side of his game. This year has been arguably his most effective, but he has been handling tough assignments for most of his career.