Accrued Season -  "Any League Year during which a Player was on a Club's Active Roster for 40 (30 if the Player is a goalie) or more Regular Season Games, provided that, ... games missed due to a hockey-related injury incurred while on a Club's Active Roster shall count as games played for purposes of calculating an Accrued Season ... " (Article 1)

Professional Season - For a player who was age 18 or 19 when they signed their first NHL SPC, any year in which they played eleven (11) or more NHL games, minor league games, or European professional games while under an NHL SPC.  If the player was age 20 or older when they signed their first SPC, any season in which they played in at least one (1) NHL game, minor league game, or European professional game while under an NHL SPC.   (10.1.c.i)

An RFA continues to have an obligation to their prior club when their SPC ends, but a UFA is completely unencumbered.  There are no restrictions on their movement, and their previous team doesn't receive any compensation for losing them to another club.  (Article 1)

Who is a Group 3 Free Agent?

A Group 3 UFA is any free agent player who is either age 27 on June 30th prior to the start of the current League Year, or has seven (7) Accrued Seasons in the league.  (Section 10.1.a)

Who is a Group 6 Free Agent?

A Group 6 UFA is any free agent player who is a) aged 25 or 26 on the most recent June 30th, and b) has played three or more Professional Seasons, and c) if a skater, has played less than 80 total NHL games, or if a goaltender, less than 28 total NHL games. (Section 10.1.c)

What happened to Group 5 Free Agency?

Group 5 Free Agency was a special UFA category for players who had played in 10 Professional Seasons but were making less than the league's average player salary in the final year of their most recent contract.  During the term of the 2005 CBA, the age requirement for Group 3 free agency has slowly been lowered from age 31 to age 27.  Now that Group 3 free agency starts at age 27, it is impossible to play 10 professional seasons before qualifying to be a Group 3 player.  (Section 10.1.a and b)

Who is a Draft Related Unrestricted Free Agent?

If a player is ineligible to be claimed in a future Entry Draft, they can enter the league as a Draft Related UFA at any time. From Section 8.4, that includes the following players:

For any other player who goes unclaimed in an Entry Draft, they can sign with a club as a Draft Related UFA during a specified free agency period following the Draft.  The timeline for signing those players is defined in Section 8.9.b:

At the expiration of their initial NHL SPC after being signed as a Draft Related UFA, if the player does not qualify to be a UFA again based on their age and experience, they will be subject to restricted free agency.  (Section 10.1.d.i and ii)

How does Unrestricted Free Agency work for a former RFA who was let go by their previous team?

If an RFA player is unconditionally released by their prior team, either by not receiving a qualifying offer or their previous club exercising their walk-away rights after an arbitration award, the player immediately becomes a UFA.  At the expiration of their next contract, they must qualify to be a UFA based on their age and experience; otherwise they will once again be subject to restricted free agency. (Sections 10.2.a.iv and 12.10)

How do you determine which group a player falls into?

Once you have that information, you can use the flowchart below to determine a player's free agent status. (Click to enlarge) 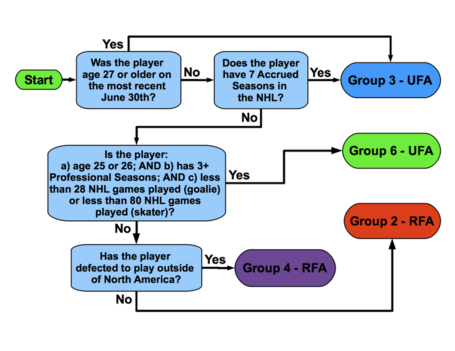 Disclaimer:  The content in this CBA FAQ is based on my own interpretation of the wording in the NHL Collective Bargaining Agreement, unless a link to the source of another person's interpretation is explicitly provided.  The full PDF document of the 2005 CBA is available for public download from the CBA section of NHL.com. I will do my best to ensure the accuracy of each article, but I welcome any comments, feedback, and discussion to improve and/or correct each section.