This is awesome. Bumped from the FanPosts. - Travis

So for those of you who looked past all of the Dry Island BS in Tuesday's Fly By, there was a bit of discussion about a link up on Fear the Fin that showed a fantastic graphic history of everyone on their current roster. After going through the tracks of some current players on the team, such as Jakub Voracek and Chris Pronger, I decided to take my turn and go through everyone on the roster and at least try to explain the history that led to the arrival everyone on the 26-man roster currently up on the Flyers' web site.

My goal here was to trace every player back to either a draft pick originally owned by or a free agent signed by the Flyers, or in a couple of rare cases, a trade we made where we sent out "future considerations" (or, in other words, guys we got for free). Ultimately, I did what I could and put together a flowchart like the one at FTF. I'll admit it's nowhere near as asthetically pleasing, and I'm open to suggestions and/or improvements, but I have no sort of graphic design knowledge whatsoever and made literally this entire post in Microsoft Excel, so given that, I think I did alright.

While it's tough to compare these findings to the rest of the NHL, since not many people are crazy enough to dig up all of this crap, I'll make some comparisons to the Sharks along the way because they're the only ones I really can compare it to. I'll also take this time to acknowledge that yes, I fully stole this idea from FTF.

Originally, I was going to put together only a write-up, but after I had written almost all of it I figured it was basically a massive wall of text and not that many people would really want to see that. But some probably do, so if you're interested, take a look at this page for a written description of everything in this flowchart.

Questions? Nope? Didn't think so. Here's your flowchart -- which is huge, heads up -- after the jump. 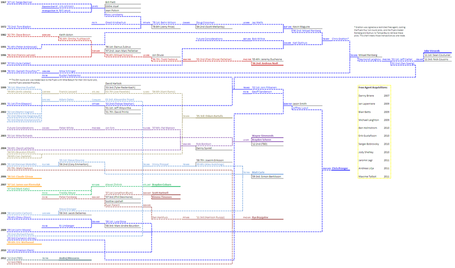 So once you've taken that all in...the analysis. First, let's take a look at this chart, which shows every pick originally owned by the Flyers that has helped shape today's roster, and who each of those respective picks helped bring. (Take note: any years with a bold line underneath them mean that a year was skipped between that year and the next one on the chart.) 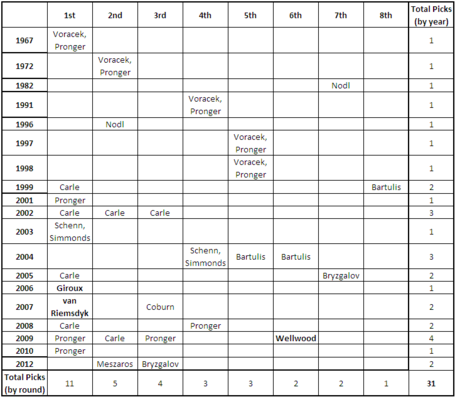 Players not mentioned in the above chart include Hartnell, Timonen (both can be traced back to Forsberg, a free agent acquisition), and the 11 free agent signings.

Players in bold are the ones we drafted. Yes, there are only three players on our current roster--JVR, Giroux, and Wellwood--who were taken with picks that the Flyers owned the whole time. However, I have no idea how commonplace this is; the Sharks only had two.

While we're at it, then, this next chart is simply a list of notable active players taken since 1996 with picks that were at some point owned by the Flyers--not necessarily ones that played into the roster today, but ones we dealt regardless. ("Original Pick?" means whether or not the pick was one that belonged to the Flyers from the start or not.)

Players in bold are ones we ended up with anyways. You were coming here all along, Danny boy (Syvret, not Briere, obviously).


Thoughts on the above draft pick madness:

--Numbers: a total of 31 picks helped bring about 13 of the players on the team's roster (the other 12 being Hartnell, Timonen, and the 10 free agents). That...seems low. For another point of comparison, the Sharks used 41 to put together their roster per FTF, though by comparison they also had 13 players on their team that they drafted compared to our five.

--Well, duh: fairly predictably, 11 of the 31 picks used were first rounders, by far the most of any round, and the number decreases as the pick gets lower.

--It was a good year: 4 picks in the 2009 draft have brought us something today, most of any draft. Our 1st and 3rd that year went towards Pronger, our 2nd towards Carle, and our 6th was Wellwood.

--Attention hogs: the three guys who had the most of those 31 picks make an appearance on their trail here are Pronger (10 picks), Carle (seven picks), and Voracek (five picks).

--Bang for your pick: The only guy who we coughed up only a single pick for, other than the ones we drafted, was Braydon Coburn (a 2007 3rd). I'll take that tradeoff. By comparison...

--I think he's good too, Geoff, but really? Four 1st-round picks have been used in some manner to help bring about Matt Carle's presence on this team. That's tied with Pronger for the most of anyone.

--Be patient, young grasshopper: as just mentioned, no 2011 picks have played any part in putting together today's roster. This obviously kinda makes sense, since the draft just happened and obviously no prospects are coming straight to the team, but I guess it's worth noting that none of those picks were traded for people on the roster today. That doesn't mean we DIDN'T trade any of those picks, though. Kris Versteeg and Dan Carcillo say hi from elsewhere.

--Don't worry, you didn't miss much: When it came to the guys we missed out on/guys that were taken with the picks we dealt, at first I was only going to stick to look at those mentioned in the bracket at first. But like...we got REALLY lucky in this regard. Other than Carlson and Pavelski, there wasn't anyone on that flowchart in parentheses who I looked at and thought "eff, we could really use him right now," which is why I decided to just dig through the past 15 or so drafts to find ANY good players that were taken with picks we dealt. And even that second chart doesn't look too bad--I'm sure we'd have all loved Brandon Dubinsky and Maxim Lapierre, and maybe Ondrej Pavelec could've been the answer to our goalie problems--but if that's all we're complaining about, we could've done a whole hell of a lot worse, especially when you consider three of them are here now anyways. The list they had on FTF had way more names than that; off the top of my head, I remember Briere, Pronger, Lecavalier, Marc Staal, and Krejci as guys who were taken with picks they dealt at some point.

Next, here are our trade partners that helped put this roster together:

And trades that indirectly affected more than one player on the roster: (other than the obvious Hartnell/Timonen and Schenn/Simmonds trades)

July 2, 2001: Daymond Langkow traded to Phoenix for Phoenix's 2002 2nd round pick and their 2003 1st round pick.
Players affected: Jake Voracek, Chris Pronger
(yes, everything that led up to this trade also affected these two, but I don't think I need to write all of that out. This was the main one.)

Thoughts on the trades:

--Numbers: we made a total of 45 trades with 19 teams. I don't think any of us are surprised to see the likes of Tampa, Los Angeles, and Nashville towards the top of the list. San Jose made 54 to get theirs.

--Eh, screw them anyways: There are ten teams with whom we did not have a trade mentioned above: New Jersey, NY Rangers, Boston, Montreal, Ottawa, St. Louis, Calgary, Minnesota, Colorado, and Dallas.

--The love hasn't gone both ways: from FTF:

Of the trades that are on the Tree, the Sharks have traded with the Panthers and Flyers the most with five trades each.

Only one trade from the Sharks is mentioned above, and it was the one where we traded them the pick that gave them Joe Pavelski and eventually led to Oskars Bartulis. Not a mutual relationship there.

So, uh...I think that's it. Most of my reactions have been mentioned, and I've been putting this together for a few days so I don't have much more mental capacity to try and draw more conclusions. I'd love to hear what you guys see. I don't know if I'm entirely done with this, but I'll take a break for now.

Hope you all enjoyed that.