Do you get what you pay for?

Share All sharing options for: Do you get what you pay for?

Remember this chart, showing the relationship between cap hit and points-per-game production for NHL forwards? 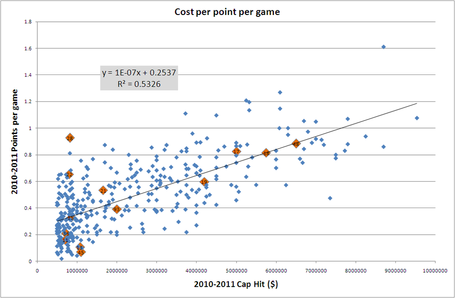 Notice the R^2 over 0.5, suggesting a pretty strong correlation between salary and production. After the jump, we have a similar chart comparing goalies' even strength save percentage to their cap hits. 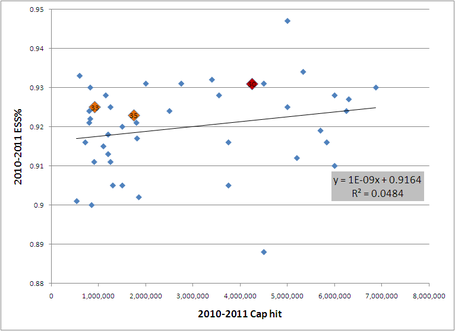 Here's the data for goalies. Instead of a R^2 of over 0.5, we have an R^2 of under 0.05 -- goalies' production and cost are almost completely unlinked. That's not because general managers don't appreciate the importance of save percentage; it's because goalie performance is very difficult to predict.

If Bryzgalov replicates his .931 from last year, he will still be underpaid relative to existing contracts (which may still be an overpayment if GMs historically overvalued goaltending, but we will leave that discussion aside for now). But three out of six years since the lockout, he has been at .919 or worse, and if that happens again this year, he will be overpaid by at least $3.5 million.

For those who think that couldn't happen, I leave you with this final thought: