Update: It looks like Drummond Custom Airbrush, a company based in Langhorne, is also working on a mask for Bryzgalov. Maybe he'll have two masks. Maybe he'll pick one. DCA did the work on Sergei Bobrosky's secondary Sideshow Bob mask last year, as well as the masks of Ray Emery, Michael Leighton and Brian Boucher.

Geoff mentioned this in the Fly By this morning, but it's worth pulling out into its own post (it's August, yo). Ilya Bryzgalov has a new mask, obviously, since he's switching teams and everything, and according to InGoal Magazine, this is what that mask looks like (click to enlarge): 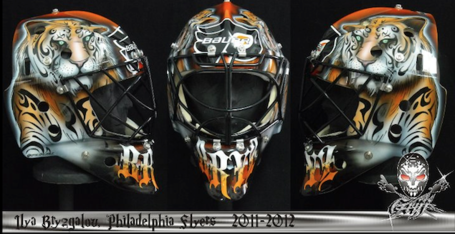 I think this mask looks cool, but I'm not sure I understand it at all. It's a tiger. Yeah, I mean.... that's awesome and everything. But like, why a tiger? Is it because they're orange and black? Is it because he likes tigers a lot?

The execution of the artwork is gorgeous. The tiger is vivid and clear and beautifully distracting, but I just don't get why he went with a tiger. We're not the Philadelphia Tigers, you know?

Anyway, it's cool. Does it match up with his mask from his Phoenix days, which included artwork from his kids and a team logo that's not hidden by the BAUER logo across the top? 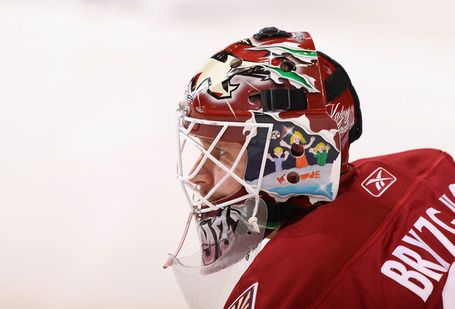 I'm not sure this new one is better, but hey, that's fine. (I mean, it is just a goalie mask.) It's still kind of cool looking at it's at least different in the fact that it almost looks like it's just a photo of an animal on his face, not an airbrushed cartoon of one. It's cool looking and it matches the team colors. It could be worse.