What shapes our hockey viewpoints?

Share All sharing options for: What shapes our hockey viewpoints?

Last week, many of you participated in a survey I put together (thanks) that had five questions about hockey and five demographic questions. The exact survey questions can be seen here, but in brief they sought to get opinions on:

plus there was one question with an objective answer, asking the user how many points the average second liner scored. Over 300 people participated, and after the jump we'll take a look at the responses and look for correlations between people's backgrounds and their hockey views.

The first thing that was apparent was the respondents' upbringing -- at least as measured by questions probing parental education levels and religious conviction -- showed essentially no impact on the respondents' views on hockey.

Those variances were within the margin of error of this survey; moreover, even if they were statistically significant, the practical significance of 51% vs 47% is pretty small. It would seem safe to conclude that a person's upbringing has little impact on their hockey views, at least for the cultural tendencies considered here.

In contrast, the respondents' political views appear to be highly correlated with their hockey views. People with opinions generally associated with the Republican viewpoint -- skepticism about human impact on climate change and a belief that US government's stimulus package hurt the economy -- tend to hold more traditional hockey viewpoints (see Tables 2 and 3).

The differences are strong enough to easily be considered statistically significant -- there is less than 1% chance of getting correlations this strong from a random data set of this size. It is safe to conclude that people whose politics lean more leftward tend to agree with more of the hockey views of the statistical analysis community.

There are a couple of questions that didn't provide much insight. It turns out that very few of the respondents think highly of Chris Osgood, regardless of their background or politics. I had hoped to use him as a window into people's views on clutch play, but at least among the people I was able to reach, he was not as divisive a figure as I had thought he would be.

I also included one question with an objective correct answer to test whether certain backgrounds lead people to be more accurate than others or more optimistic than others. Again, the results were unimpressive: regardless of background or politics, everyone overestimates second line scoring by a little bit. (The 45th highest scoring LW/C/RW last year had 40, 44, and 41 points respectively, yet the mean, median, and mode for all groups was near 50.)

I haven't yet talked about the impact of age. Age did not appear to play a role anywhere except whether a person was likely to be a Corsi user: 65.5% of respondents under 25 use it, 57.1% of respondents between 25 and 34 do, and 50% of 35-and-older respondents use it. Part of me wants to connect this effect to how much of the person's life was in the post-Moneyball era, but then why don't we see a similar effect from how much of their life was in the instigator-rule era?

Also, having at least 50% of respondents in every age group use Corsi makes it clear that I haven't reached a truly representative sample of the hockey public. I think this is important to keep in mind, but I think the correlations observed in this study are still worth pondering.

Finally, I would like to conclude with a bonus nugget. Some saw the survey questions about religion and feared that I was driving towards a narrative that religious people were stupid. In fact, not only were the hockey views religion-neutral, but in addition it seems that respondents from more educated households were more likely to attend religious services regularly: 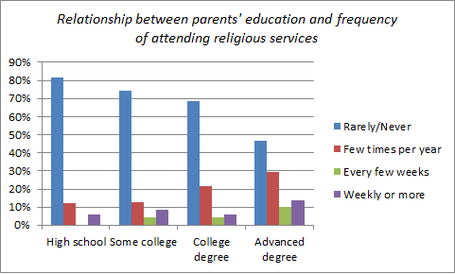 I admit that this surprises me. This is why we collect the data before constructing the narrative.

In this piece, I have mostly tried to present the data without editorializing, so that the comments can be a sort of follow-on survey. What is your interpretation of the data shown here? I'd love to hear it, but please phrase it in a way that won't offend people who have political, religious, or hockey viewpoints that are different from yours.