Share All sharing options for: How SOG rates change with age, part 2 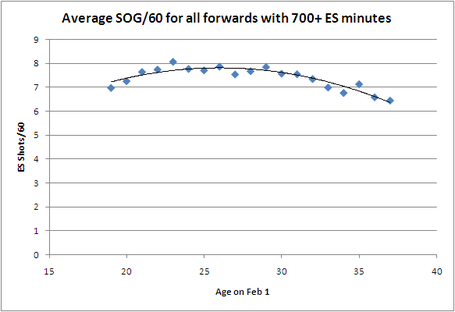 Yesterday, I showed in a quick glance that shot rates don't change much as forwards age. This time, we'll get into the details a little bit more -- are things really as simple as this curve makes them look?

We focused last time on the ~10% increase in shooting rate over the first few years of this curve, but there's a potential complication. The group of 19-year-old NHL players is on average more talented than the group of 23-year-olds, since a third-round-pick C+ kind of player won't log top-9 NHL minutes as a teenager. When they do make it to the lineup in their early 20's, they bring down the average and make it look like those teenage phenoms didn't grow as much as we thought.

Or do they? Let's compare the overall shot rate to the shot rates for just the players who debuted young: 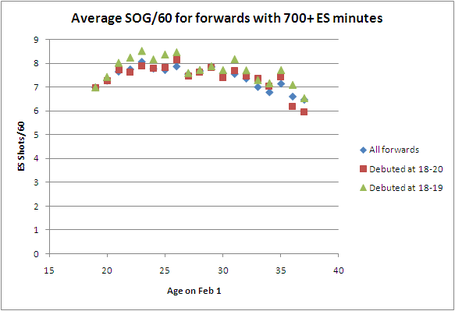 Compare the blue diamonds to the red squares and you can see that limiting this to forwards who made it into the NHL by the time they were 20 doesn't change the data at all.

The green triangles suggest that forwards who are in the NHL by 19 might grow a little more, but there are fewer than 20 of them per year, which isn't much to go on. A statistical measure called a t-test says that you'd have a pretty good chance (45%) of seeing a difference that big in the 23-year-olds just by random variance. So there's nothing here to suggest that we need to treat the super-talented forwards differently; the first plot was fine.

Another way to represent the data is very similar, but focuses on a player's change over time. Instead of looking at the average shot rate for a 22-year-old and the average shot rate for a 23-year-old, let's look at how much improvement we see in the guys who played both years. This is pretty similar, but eliminates a little bit of the bias introduced from players who don't play both years, and gives the following: 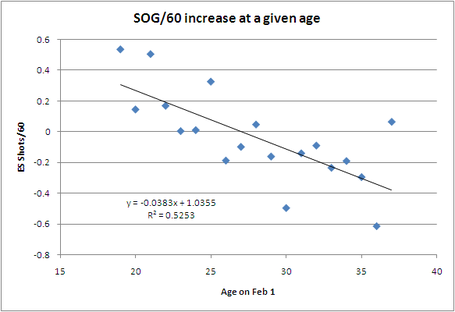 What's really nice about treating the data this way is that now we can look at how much scatter there is in the individual data instead of just the population averages. The plot above shows us that the average 18-year-old improved by a little more than a half a shot per 60 in his next year, but not how many improve by 2 shots or how many take a step back. We can get that by looking at a scatterplot of the individuals: 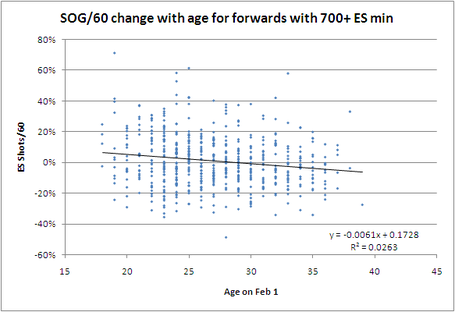 Whereas the previous plots just had one dot for the average 18 year old, this plot has a dot for every player, and that lets us see that the players aren't clustered terribly close to that average. The population might shift by a few percent per year, but the standard deviation is larger than that, meaning that we can't predict next year's shot rate with better than about 15% accuracy.

There's a more analytical way of looking at it: if the spread we're seeing were from natural learning curves, we would expect to see players who are good at learning grow more each year. However, this chart shows the opposite, that players who develop a lot one year actually take a step back in the following year: 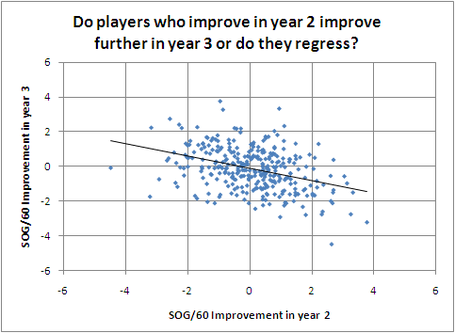 The guy who improved his shot rate by 2-3 shots per 60 isn't a quick learner; he's the beneficiary of random chance who will most likely slip back to his true talent level next year. 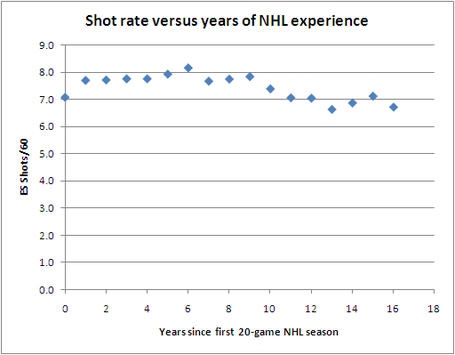 It looks like there's a big jump forwards in a player's second year, but no experience-related growth after that. It would seem that it doesn't matter whether a player is in the NHL or AHL over the early part of his career; his shot rate will follow roughly the same curve. If anything, there is a slight downward pressure for players who start their careers in the NHL, but the effect is statistically insignificant.

So after all of that, the best conclusion is still the simplest one: don't expect a young forward's shot rate to increase by more than a couple percent over his career levels, particularly after his second year in the NHL. There's some variance involved, as with anything in sports, but it'll be rare for a player's true ability to get shots off to change markedly over the course of his career.