Originally wrote this back in September. Considering All-Star Weekend is just about here in both the AHL and NHL, it seems timely to bump it up again now. I hope the AHL All-Star Game on Monday in Atlantic City isn't a failure, but...

The American Hockey League announced on Thursday afternoon that their 2012 All-Star Classic will be held in Atlantic City. All the important details:

For those of us who love AHL hockey and live in Philadelphia or points east, this is fantastic news. Boardwalk Hall is a beautiful venue for hockey (or anything, really) and the AHL All-Star Game is a great event. At the same time, there are plenty of questions here.

The AHL All-Star Classic hasn't been in the area -- unless you're considering Hershey local -- since 1999 when the PlanetUSA All-Stars (seriously) beat the Canadian All-Stars 5-4 in a shootout at the First Union Center in South Philadelphia. Now it's back, and it's another chance for all of the displaced Philadelphia Phantoms fans around to see AHL hockey again without traveling too far (depending on where you live, of course).

So, this is extremely welcome news. I'll be there. You'll probably be there too, or you're at least thinking about it and wondering if you can make it work. (That Monday thing sucks, doesn't it?)

On the surface, it makes a lot of sense for the AHL, too. It's a little curious that they aren't playing the game in an actual AHL city, obviously, and it's the first time they've done that in the modern history of the AHL All-Star Classic, dating back to 1995. But there are a ton of hockey fans within 150 miles of Atlantic City.

This (crude) map shows all the professional hockey teams -- NHL, AHL and ECHL -- within that radius. There are many. 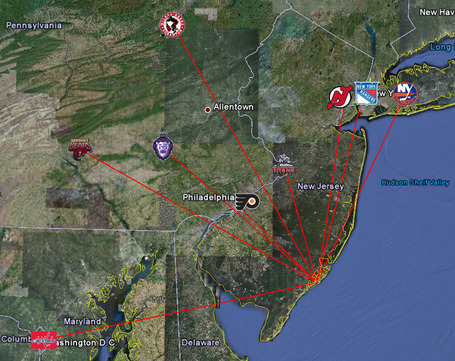 Hockey fans will travel for an event like the AHL All-Star Game, and there are plenty in the area to fill the seats at Boardwalk Hall. And for the Atlantic City Convention & Visitors Authority, it makes plenty of sense: they have this huge building that sits vacant most of the year, and they're trying to A) fill it as often as they can, and B) get high profile events in the city that could eventually lead to a permanent professional tenant.

It's quite a list that they've compiled already: the A10 Basketball Championship, the ECAC Hockey Tournament and now the AHL All-Star Game. For a city that's off the beaten path for all of these leagues, bringing each showcase event to town is impressive. You can add several Albany Devils games, including one against the Adirondack Phantoms in 2010-11, to the resume as well.

But despite the beautiful venue and the proximity to several pro hockey teams, holding this game on the Boardwalk is extremely curious. Success seems much less likely than failure.

1. The Ice: Alright, so Boardwalk Hall is gorgeous, and it really is a first-class venue all around. That's what happens when you spend $90 million on renovations.

But let us recall the nightmare that occurred before the Albany Devils vs. Wilkes-Barre/Scranton Penguins game on December 12 of last year. The arena was full, complete with a large cheering section that had made the trip down from WBS and then -- no game.

Ice problems, stemming from a figure skating event the night prior, forced the postponement of the game. It was embarrassing, and it was perfect fodder for the Albany fans already pissed that their team had been taken away for four games. Could something like that happen again? The crew at Boardwalk Hall hopefully learned from the mistake, but it's not something that's exactly confidence-building.

2. The Fans: Plain and simple, Atlantic City has failed as a hockey market. The Boardwalk Bullies of the ECHL won the Kelly Cup in 2003 and were successful in 2001, 2004 and 2005 as well, but low attendance led to their relocation to California. If a great team on the ice isn't enough to bring in fans, well...

The Devils playing four games in AC last season was seen as a bit of a test run for a potential AHL relocation -- "hey, attendance sucks in Albany, and it'd be nice having our AHL affiliate in New Jersey, let's give it a shot." But it's safe to say that, after four AHL games last season, the community in Atlantic and Cape May Counties still isn't ready to jump on board.

Maybe that has to do with the fact that it was a Devils affiliate playing in Flyers country, similar to the problems the ECHL's Trenton Devils encountered before pulling out of that city after last season. But the attendance trends from last year's AC games are obvious. The four AHL games averaged just 3,688 in attendance per game, which would have put them ahead of only Binghamton, Adirondack and Albany across a full season last year.

But those are not numbers that would have held up over an entire season. Breaking the numbers down game-by-game, you can easily see that the majority of the boost were from fans of the other teams, not the "home" Albany Devils. The game against the Phantoms was the highest attended, as expected, with 5,134 butts in the seats. The Hershey game was slightly behind, as you'd expect, with 4,321 people attending.

The final two games are perhaps the most enlightening. Without the boost from the Baby Pens fans who opted not to make the second trip for the rescheduled game in Atlantic City, attendance came in at just 2,352. For the final game of the set against the Norfolk Admirals, a team with no local connection (obviously), just 3,027 showed up.

The crowds were driven by the other teams, not the local fans. People traveled to get to these games, and the majority of them weren't locals.

3. The Date: Maybe that's the AHL's justification when all is said and done here -- enough fans of other teams will travel to Atlantic City for the All-Star Game that it'll be a successful event. That's surely possible. Likely, even.

Until you look at the date. The AHL All-Star Classic is almost always the same weekend as the NHL All-Star Game, but to avoid their older brothers big show, the AHL holds their Skills Competition earlier in the afternoon on Sunday while holding the actual game on Monday night.

If it was a weekend in Atlantic City, I could understand thousands of people actually making the trek. A little gambling, maybe catch a show on Friday night, followed by hockey on Saturday and Sunday. Instead, the Monday wrench is thrown into all the plans. Sure, some people will come, but likely hundreds, if not more will be deterred by that. People have jobs and lives and stuff.

There's always the possibility that no other AHL team wanted to host the All-Star Game this year, so the league had to look to other options, and Atlantic City is as good an option as any other they had in front of them. Perhaps it was the only option -- that we'll likely never know.

But regardless, this could be a disaster waiting to happen. For the AHL, there's the potential of a lot of lost revenue on the line, and for Atlantic City officials desperate to get some kind of tenant back at Boardwalk Hall on a permanent basis, there's even more to lose.