Florida and Philadelphia came into this game as the worst two teams in the league in shootouts. The Panthers were 9-33 at home in the coin flip. So it stood to reason that the would garner their tenth victory at the hands of the Flyers. However, Bob said "NYET!"

Mike Santoreli, Kris Versteeg and Stephen Weiss all skated back to their bench after leaving the twine untickled as Sergei Bobrovsky played big in the crease. In true Goldberg form he made every Panther make the first move.

On the flip side (see what I did there) Claude Giroux deked Scott Clemensen out of his pads to put the Flyers into the win column. Ankles have not been that badly broken since Kathy Bates in Misery.

A questionable call led to the opening goal of the contest. After Tom Sestito levied a hit on an unsuspecting Panther, he was called for charging despite not leaving his feet. Sergei Bobrovsky made two huge saves but could not stop a rocket from Mikael Samuelsson on the powerplay.

There was a rather lengthy break in the first period as a pane of glass needed to be fixed. Not sure if the glass was damaged by a Eric Gustaffson shot. Who knows what would have happened if that shot was actually on net but that’s besides the point. The delay didn’t seem to hurt either team or the pace (or lack there of) of the game.

In the spirit of the upcoming All-Star skills competition, rookie Brayden Schenn took a shot off of Scott Clemensen that massed up into the air about 10 feet and dropped in behind the Panther keeper. Again there was a lengthy pause in the action as the War Room in Toronto looked over the goal. Eventually it was ruled that no conclusive evidence existed to overturn the call on the ice. It stood and the game was tied.

The goal by Schenn was the 70th point by a Flyers rookie this season. Think about that for a second. The rookies on the team have scored as many points in 47 games than Joe Thortnton scored all of last year. That’s pretty fantastic when you consider the questions about scoring when coming into this season.

Just as Bill Clement said that any goals scored in this game would be ugly, Jakub Voracek decided to prove him wrong. Working a great give and go with Sesito (yep, you read that right), Jake drove to the net and tipped a beautiful pass behind Clemensen to give the Flyers a late first-period lead.

The second period was hotly contested. Niether team had A-quality chances but there was a great pace to the game. Florida proved they are not the pushover they once were…a staggering thought when coupled with the success of Kris Versteeg. Who ARE these people?

Speaking of being wrong about people. Voracek continued his great play by drawing a penalty, playing hard in front of the net with 13 to go in the second. The Flyers, however, could not capitalize on the ensuing powerplay.

Bobrovsky was the epitome of solid through two periods. He wasn’t flashy, besides his new-found love of stickhandling. He made every save he should have and made the plays look easy. His rebound control may have been a little risky but in all he took to the pipes with aplomb.

Of course as soon as I wrote those last two paragraphs, Versteeg found himself on a breakaway, the result of a rather hideous turnover from Voracek and Bob overplayed the angle leading to a wide open net for Thomas Fleischmann who tied the game at two.

The teams traded chances through the first five minutes of the third period. Bob and Clemensen each made some saves to keep the game deadlocked.

The Panthers started to find themselves on the receiving end of turnovers and lucky bounces. Bobrovsky made a couple amazing saves to bail out his team. There might be a couple of free steak dinners coming his way after his performance in the third.

Matt Read took an ill-advised penalty in the offensive zone, away from the puck giving the Panthers the man advantage with a little over 7 minutes to go in regulation. Read had been hit in the back of the head with a check earlier in the shift and took a retaliatory penalty in anger.

The goalpost and Bob made stops during the penalty kill, keeping the score level and the Flyers’ hopes alive.

The Flyers put the pressure on late, specifically the Talbot and Giroux lines. With less than a minute to go it looked like they were going to pot the go-ahead goal. Scott Hartnell could not free up his stick to tap the puck home.

Florida had an odd man rush with just seconds left on the clock but went offside, which had been a problem for them throughout the entire game. LOLCats.

One minute into the extra stanza the teams had already traded quality chances. Bob stoned the Panthers’ attempt at a shot right off the face off and Clemensen came up big against Voracek.

Turnovers continued to be a problem through overtime. Three times in one shift the defensemen failed to clear or gave the puck away.

Finally, after no winner could be determined through hockey, it was time to flip a coin. …tails.

• This has nothing to do with anything you’ll see in any stat anywhere, but, Sean Couturier was near Clemensen after a save was made. It looked as though the puck was stuck on his blocker or roling around in his glove. Scooter, with no malice or intent to injure, or even anger for that matter, took his stick and nonchalantly tried to pry the puck from the clutches of the Florida netminder. The play was both hilarious and awesome.

• We saw a flash of "beast mode" from Gus in the overtime as he decided to make a rush himself, splitting the D and getting a shot off. It was pretty impressive.

• Not for nothing but Clemensen’s mask is weird and ugly.

• Sean Couturier was put on the ice with 30 seconds left in overtime, which is impressive enough before you factor in that he took the faceoff and won it clean.

• Seriously these rookies are ridiculous. Eight of them in the line-up tonight. That’s like 44% or something! Insane.

I got a feeling about tonight... 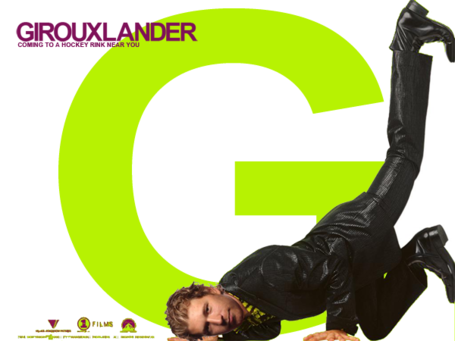