Flyers tell Zac Rinaldo to hit less: Is that happening, and is it a good thing?

Share All sharing options for: Flyers tell Zac Rinaldo to hit less: Is that happening, and is it a good thing?

Get ready to take every preconceived idea you've ever had about the way the Philadelphia Flyers operate and throw it out the door. These are the new Flyers. The tame Flyers. The Brendan Shanahan-is-watching-you Flyers. Via Puck Daddy, emphasis ours:

"Philadelphia told me about Zac Rinaldo," said Shanahan. "He's a really big hitter. Hits hard. But they said to him that if you see 20 hits a game in your head, pick the best three. That's enough to be a physical, intimidating player in this League. When I hear coaching like that, that's when I'm thinking there's full buy-in there."

You're not going to get an argument out of me that this isn't the way things should be. Physical play is good, but only when it's smart. That's from a discipline perspective (not taking so many damned penalties) and a safety perspective -- we don't want every player in the league to go down with injury thanks to dirty hits.

I've gotta say, this makes me a little proud of the organization I've spent my entire life rooting for. But is it necessarily smart from a hockey perspective?

There's no doubt that taking less hits will result in fewer penalties minutes, and fewer penalty minutes is obviously a very good thing. A more disciplined, smarter Zac Rinaldo is certainly a good thing. But the truth is that this season, Rinaldo has taken 124 penalty minutes in 36 games. That's 3.4 minutes per game he's spending in the penalty box, and he's only averaging 6:14 in total ice time per game this season.

(That's obviously not the rate at which he's giving the opposition a power play, thanks to fights and misconducts and concurrent minors, but the point is that he's in the box more than any NHLer not named Zenon Konopka. That's not a disciplined player.)

Rinaldo takes a lot of penalties regardless of whether or not the Flyers are telling him to take it easy. And looking at the number of hits he's taken per game over the course of the season thus far, I'm not so sure he's been letting up -- at least not lately. Click the chart below to enlarge. 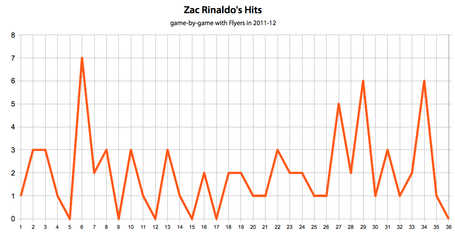 He's stayed relatively steady in terms of his average hits per game this season, but over the last 10 games, he's registered five hits once and six hits on two separate occasions. It seemed like he tamed a little bit in between Games 7 and 25 of his season, taking that "no more than three" message as completely literal. Lately, though, he's throwing the body a bit more. Maybe he's getting off message.

Either way, that's not my concern. If you're going to have a guy like Zac Rinaldo in the lineup, you need to have him in there hitting. We've already discovered that the Flyers are losing the play, generally speaking, when he's on the ice, so if he's not having a physical impact on the game, he's basically worthless.

Is telling him to tone it down (and provided he takes the advice) a bit going to minimize his impact? You hope he can still be a threatening force when he's out there, like Shanahan says, even if he's hitting less and doing it smarter, but I just don't know. Unfortunately, I'm not sure that's all that quantifiable.