Is this one of the guys who assaulted Rangers fans at Geno's Steaks?

Share All sharing options for: Is this one of the guys who assaulted Rangers fans at Geno's Steaks?

Remember that story we wrote earlier today about the handful of Flyers fans who beat up some Rangers fans in front of Geno's Steaks in South Philly after the Winter Classic? Yeah, well, the story has been on Action News already this evening, and PPD got wind of things too. They're on the lookout for suspects.

On January 2, 2012, at 7:15pm, three unknown males wearing Philadelphia Flyers Jerseys assaulted two males while at Geno's Steaks located at 1200 South 9th Street. The assault began after the Winter Classic hockey event and the male victims were wearing New York Rangers jerseys. During the altercation one of the victims were seriously injured.

We may have found the guy, and it didn't even take any detective work. He posted on the Broad Street Hockey Facebook page and said he did it.

We put all BSH stories up on our Facebook page, obviously, and it was no different earlier today when we wrote about this incident. The post garnered several comments. 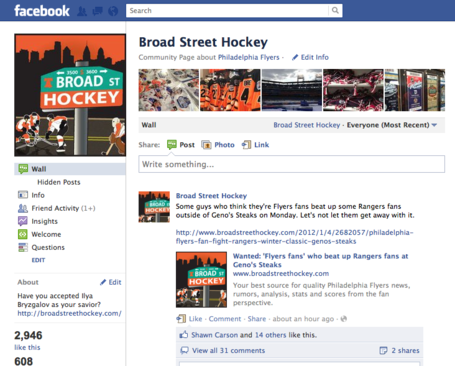 Two of those comments were from a gentleman named Edward Neary.

According to his Facebook profile, Neary is a 2009 graduate of Father Judge High School. He's also attended the Community College of Philadelphia, his interests are "Money" and "An More Money," and he speaks "Black Speech" and "Brown University." His "favorite athletes" are "Seriously I Will Punch You In The Fucking Face." How lovely. 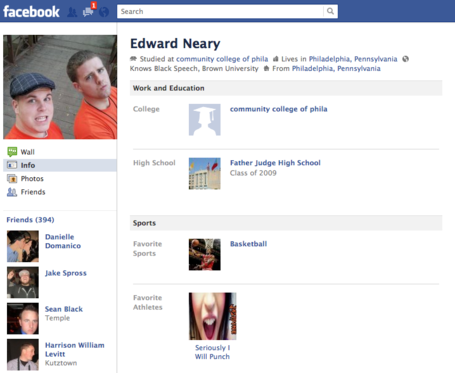 We haven't confirmed if Neary really did do this. Maybe he's just, uh... well, I don't know why anybody would say they did this if they didn't do it. We tried to add him on Facebook so we could talk with him, but he's yet to accept the request. We'll let you know if that conversation does indeed happen.

UPDATE: He's backtracked a bit on Facebook since this story was published, calling out some friends and saying they did it instead. Also, his side of the story, still via the BSH Facebook comments. 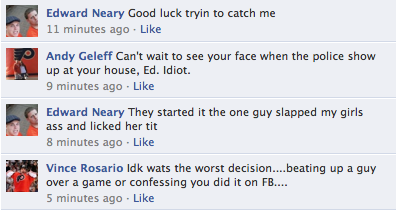 Neary then dimed out three friends in the comments, saying they were part of the attack and pointing out one man in particular by saying "he started it." Neary also tagged them with links directly back to their Facebook profiles. We originally published that portion of the comments, but out of respect for the three guys who didn't insert themselves into this by choice -- whether they were involved in the assault or not is not up to us to decide -- we've removed it.

UPDATE TWO: He deleted all of the comments above and changed his Facebook picture to one that's not of himself.

We've passed this all on to the Philadelphia Police South Detective Division. They can sort it out. If you know anything else about the assault, you should probably give them a call or pass along a tip as well.