Video: Tom Sestito, Oliver Lauridsen beat up a guy from the bench this weekend

Share All sharing options for: Video: Tom Sestito, Oliver Lauridsen beat up a guy from the bench this weekend

Since leaving Philadelphia three years ago, the Adirondack Phantoms have seen their once-awesome rivalry with the Hershey Bears fall by the wayside. It took a step back in time this past weekend, however, with an incredible Phantoms win in at Citizens Bank Park in Philly on Friday night and, well, this incident on Saturday night in Hershey.

You'll want to fast-forward to the 2:18 mark of this video.

It all occurred at the 16:30 mark of the third period in what had already been a pretty feisty game between the Phantoms and Bears. In fact, before this point, the teams had already combined for 46 penalty minutes, including a fight and a 10-minute misconduct to Hershey goon Josh Rechlicz. We tried to figure out exactly what he incurred that misconduct for, but the lone report on the game from the Harrisburg Patriot-News didn't include details.

That's relevant since Rechlicz was at the center of the melee in the third period. According to the Patriot-News, Rechlicz was pissed that Tom Sestito had done something to Hershey goalie Dany Sabourin during warmups on Friday night. Rechlicz wasn't in the lineup on Friday, but he saw the ice on Saturday and wanted to exact revenge.

"He's throwing elbows at guys when I'm not in the lineup," Rechlicz said. "When I am in the lineup, he's quiet as a mouse. I don't want to see any of my guys get hurt. I've got everybody's back in there. Good team effort. We got the win. That's the most important thing."

Rechlicz crushed Sestito with a check late in the third. Sestito exited to the bench for a line change instead of taking an opportunity to fight.

"That's what he does," Rechlicz said. "He runs his mouth and doesn't back anything up. I wasn't too surprised or shocked about it."

This isn't necessarily surprising. Sure, we haven't seen a ton of Sestito this season, but in the limited time we have, we've noticed a lot of the same. He doesn't always seem to be the most willing combatant, but he's always running his mouth on the ice... and on the bench, as 24/7 taught us.

So that's where we pick up at the 2:18 mark of that YouTube video above. Tyler Brown takes a run at Rechlicz, presumably for the hit earlier on Sestito. Andrew Carroll and Brown tried to go but the linesman cut them off, and apparently, while that was being broken up, Sestito chirped Rechlicz, who made his way over to the Adirondack bench.

Sestito threw a punch from the bench, then Rechlicz tried to get on the Phantoms bench and was held back by teammates. Right at the boards though, he was grabbed by Oliver Lauridsen, who pushed about three teammates out of the way to get to the end of the bench and threw at least one punch that can be seen on the video.

Somehow, Lauridsen only picked up a 10-minute misconduct for that. It looked like he threw more punches than Sestito.

Meanwhile, Zach Miskovic dropped the gloves away from the bench with Brandon Manning. Both guys picked up fighting majors, adding to the penalty total. In all, at the 16:30 mark of the period...

Cullen Eddy was thrown out for apparently fighting after already receiving a fighting major on the same play. It's obvious was Sestito was thrown out, just as it is for Rechlicz, who wound up with 35 (!) minutes in penalties in the incident. We suspect there will be more discipline coming down from the AHL this week, too.

Unfortunately, the only news report on the game is from the Hershey side of things, so we don't have much reaction from the Adirondack side. Hopefully Tim McManus can chat with some of the Phantoms this week and get their side of the story, although that's certainly not the same as getting the raw reaction immediately following the game.

Twitter does help us with that other side of the story, though. On Sunday, Manning took to the Internets to call out Rechlicz and his "outrageous antics" from warmups on Saturday night. 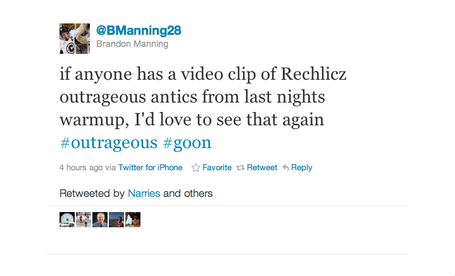 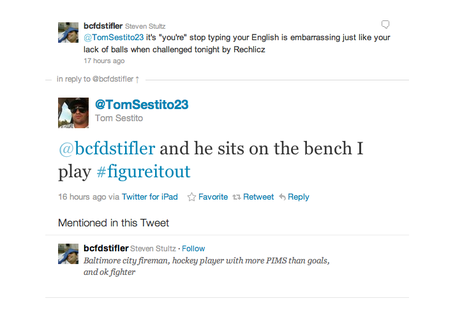 Sadly, the Bears and Phantoms don't play again until March.

Hat tip to Tim McManus for Tweeting the fight video.