Phantoms to look awful in preseason game vs. Albany

The Phantoms have an awesome roster set for their preseason game Tuesday at the Skate Zone, but their uniforms aren't exactly on par.

Share All sharing options for: Phantoms to look awful in preseason game vs. Albany

The Phantoms have a preseason game today! It's at the Skate Zone in Voorhees at 2 p.m., and it's completely free if you're able to attend. Go watch some hockey. It's good for the soul.

Maybe not for your eyes, though. Via the Flyers: 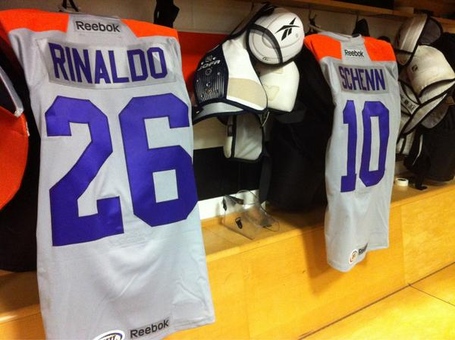 No clue what the front looks like, but man. The Phantoms had supposedly ditched the purple with the move to Glens Falls three years ago, but it's making quite the return here. Ouch.

The lineup looks much better than the sweaters the team will wear. Also via the Flyers, here's the full lineup:

As far as we know, there's no live feed of the game in either audio nor video form. Sucks, but hopefully you can get to the rink on this rainy Tuesday afternoon.