Lehigh Valley Phantoms to switch from purple to blue, and it sucks

Purple needs to stay. What is this, Phantoms? New York City?

Share All sharing options for: Lehigh Valley Phantoms to switch from purple to blue, and it sucks

They'll say it's just an "accent color," but it's not really just an accent color.

When the Phantoms move to Allentown in 2014, they'll drop the purple they've had forever and they'll switch to "electric blue." This is not okay.

Regardless of how you feel about the color purple, it is a piece of this franchise's history and really, it meshes pretty well with orange and black. Surprisingly well, actually.

The Phantoms tried to marginalize the purple after they moved to Glens Falls three years ago, and their initial jerseys barely highlighted the color at all. That's still largely true. But slowly over the last few years, the purple has made a bit of a return. Purple gear is for sale at the Glens Falls Civic Center and during this past preseason,, the team wore jerseys that had purple numbers. You can still see purple in the eyes of the logo if you look closely.

Purple is part of Phantoms history. When they were in Philadelphia, it was a distinguishing factor between them and the big club. It gave them more of an identity than "Oh, just that minor league team owned by the Flyers." When they won the Calder Cup in 1998 at the Spectrum, purple was there. On their sleeves, in the crowd. Purple balloons fell from the ceiling. The carpet rolled out on the ice? It was purple.

In 2005 when they won again, the team was fully dressed in purple. The crowd? Purple.

Purple is part of the Phantoms identity, and it has been since their inception. Getting rid of it and just keeping orange and black would be one thing, I guess, but replacing it with blue? Well, that just sucks.

Let's just think about orange and blue for a second. 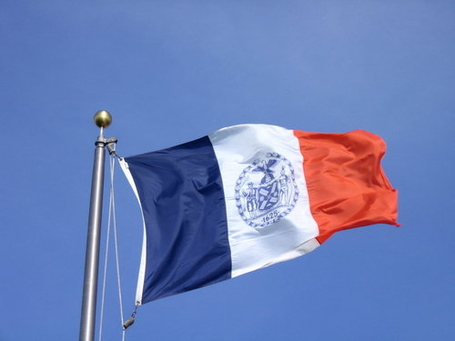 That flag belongs to the City of New York. So this isn't a coincidence:

And now, joining the ranks, the Lehigh Valley Phantoms, the top affiliate of your Philadelphia Flyers.

There would be no need to make this color change if they didn't have plans to actually use the "electric blue." You just know that in two years, the Phantoms are going to have orange and blue third jerseys. You just know it. They're going to look like the friggin Islanders. Unacceptable.

Keep the purple, Phantoms. It's part of who you are.