Why Eric Lindros deserves induction into the Hockey Hall of Fame

Share All sharing options for: Why Eric Lindros deserves induction into the Hockey Hall of Fame

Eric Lindros will enter the Hall of Fame tonight.

No, not the one in Toronto. No, not the one at the Wells Fargo Center. The Philadelphia Sports Hall of Fame, and it comes five years to the day he retired from the sport of hockey. It's a deserving honor for No. 88, who joins just seven other individual hockey inductees in the Philly Hall, but it's also another opportunity for us to scream from the top of our lungs again:

Eric Lindros deserves to be in the Hockey Hall of Fame, he deserves to have his number retired by the Philadelphia Flyers, and really, it's a joke that neither has happened already.

The case, at this point, is really inarguable.

Let's talk about pure scoring acumen for a second. We ran these charts back in June when Lindros was snubbed for the 2012 HHoF class, which will be inducted this coming Monday in Toronto, but they're worth bringing up again.

Players in green are in the Hall of Fame. Players in yellow are not yet eligible for induction (you need to have been retired from the game for three years to be considered) and players in red are eligible but not in the Hall. There's not a lot of red. 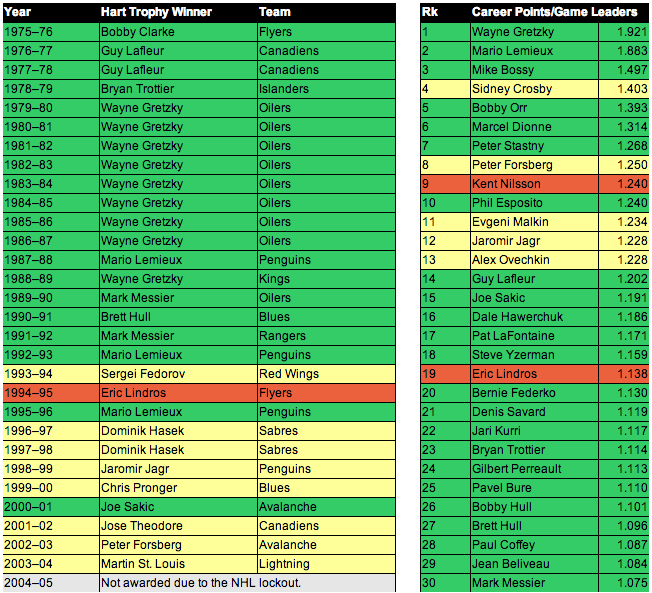 88 is the only Hart Trophy winner since Bobby Clarke won the thing in 1975 (37 years ago!) yet to earn induction into the Hall of Fame. When it comes to the all-time leaders in points per game, Lindros is 19th all-time. And if injury hadn't stolen his greatness in the latter years of his career, his rank on this second chart would be even more impressive. Remove the years following the infamous Scott Stevens hit in 2000 and Lindros would rank sixth all-time in points per game.

Sixth all time! The only players ranked higher than him would be Wayne Gretzky, Mario Lemieux, Mike Bossy, Sidney Crosby and Bobby Orr. Quite the list.

Sidney Crosby, who's already put together a HoF career, has seen similarly dominant numbers in this category: Ranks of sixth, first, second, third, fourth and first through the prime of his career. For as much as we hate the uniform he wears, can you imagine Crosby not getting into the HoF if, tragically, his concussion issues were to rob him of the remaining years of his career?

There has never been a physical specimen quite like Eric Lindros. Take the scoring and skating skill he exhibited throughout the prime of his career and couple it with his size and you have one of the scariest players to ever play the game. Lindros could score with the best of them and he could also bury you with a huge hit unlike any other player in his era. And if you wanted to fight, he'd gladly drop the gloves and knock the crap out of you.

Eric Lindros was the superstar who didn't need a goon to protect him. He could handle himself just fine.

Impact on the growth of hockey

Do you know a hockey fan in Philadelphia who grew up in the 1990s? Ask that fan who their favorite player was growing up, and chances are, it was this guy. 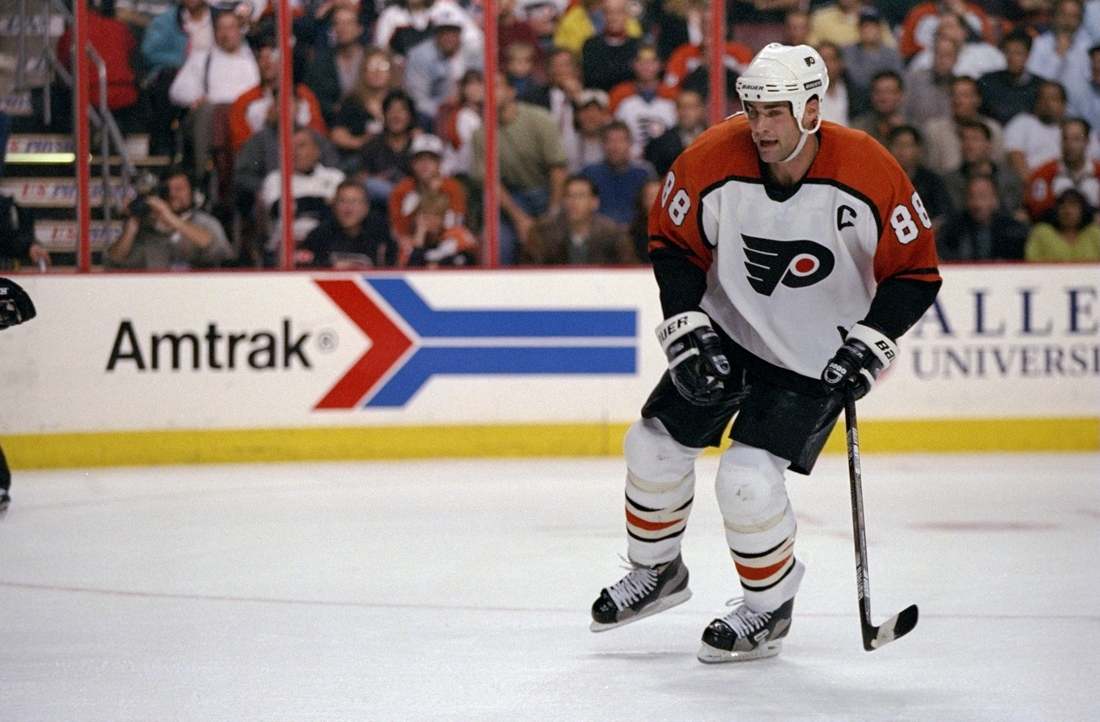 You cannot underestimate the impact Lindros' career had on the sport in the City of Philadelphia.

The biggest knock against Lindros is his longevity. (Well, that and the fact that he never won a Stanley Cup, but we all know that's silliness. Cups are not won by individuals and a lack of team success should never be held against an individual player.)

Eric Lindros didn't play nearly as many games as he should have thanks to injury, but again, the Crosby comparison is a good one. A dominant player every time he stepped on the ice as a healthy player, Lindros shouldn't be robbed of deserved accolades simply because he was hit in the head a few too many times.

Backhand Shelf covered this point well earlier in the week:

Pundits and executives regularly criticized his integrity and desire due to his reluctance to play injured.

A nice advent of the 21st century is we're now very much aware of what serious business concussions are. Lindros spending time in the press box has nothing to do with the ‘pansification‘ of hockey, but rather the fact you only get one brain and no mulligans. The Sidney Crosbys of the modern world are handled with oven mitts because hockey's antiquated machismo was a prime contributor to the deterioration of Eric Lindros, the original "Next One" who is believed to have suffered upwards of eight (EIGHT!) concussions in his career.

Lindros' longevity shouldn't be held against him. Concussions robbed him of a full career, but they don't mean he was any less great a hockey player.

Some argue that his reputation off the ice should keep him out of the Hall, and it's true that Lindros followed a ton of bad advice throughout his playing career, mostly from his father/agent Carl Lindros.

His exit from Philadelphia in 2001 cemented his legacy in this town for a decade, and it's understandably taken awhile for those wounds to heal. Bobby Clarke has reconciled with him and he's been welcomed into the Flyers family again with open arms. He skated in the Alumni Game, he skated with the team in practice last season and now he's entering the Philly Sports HoF tonight. His departure from Philly was unfortunate, but it's all water under the bridge now.

It's only a matter of time until Lindros takes his place as a member of the Flyers Hall of Fame, and if I had to guess, I'd say that'll happen this upcoming season -- whenever that comes. His induction into the Flyers HoF would officially close the wound that's slowly been healing over the last calendar year, but that's not where this ends.

His jersey retirement will likely come after his Hockey Hall of Fame induction, as was the case with Mark Howe, one of the best defensemen to ever pull on a Flyers uniform, this past season.

Eric Lindros is one of the best players to ever play the game. He should be honored accordingly.