Sidney Crosby and Penguins owner Ron Burkle are apparently positioning themselves to be our lockout saviors. That's okay.

Share All sharing options for: Sidney Crosby, Pittsburgh Penguins trying to be our NHL lockout saviors

I'm not sure why Sidney Crosby and the Pittsburgh Penguins are in such a rush to end this lockout. I mean, what with everything they have to come back to and all.

But it appears that against all concerns for both their physical and mental well-being, the Pens are leading the charge in an attempt to save the NHL season.

Meetings between the six NHL owners, including Pens owner Ron Burkle, and 18 NHL players, including Crosby, have gone late into the evening this Tuesday and "cautious optimism" is the overwhelming theme of the evening. It seems like real progress is being made, and could it all be the fault of the Pens?

Via Rob Rossi of the Pittsburgh Tribune-Review:

Burkle and Crosby were described by participants in the five-hour talks as voices of reason. Their shared point of view: The NHL should not risk another round of canceled games - they're already canceled through Dec. 14 - and the league may not recover if a season is lost to a labor dispute for the second time in eight years, the sources said.

The Penguins are a moderate in the labor war, but they will not break ranks at the Governors' meeting, sources said. Rather, their contingent will try to establish what owners need to reach an agreement, the sources said.

Crosby also will not break ranks with the players' union, but his objective over the past week has been to establish common ground among players who have lost trust in NHL ownership and management as a whole, the sources said.

Over the past few weeks, Crosby, Burkle and [Mario] Lemieux have privately discussed plans to bridge the gap between players and owners. The sources said all three had grown frustrated with the lack of progress.

And in on their Golden Chariot -- likely a chariot built upon years of failure, we might add -- they ride, here to save the NHL from imminent self-destruction at the 11th Hour. In reality, one owner and one player will not solve this lockout on their own, but they could be the bridge to a solution. And if Burkle and Crosby really do become that bridge, the narrative will be overwhelming.

ALL HAIL THE PITTSBURGH PENGUINS AND THEIR SUPREME LEADER, COMRADE KIM JONG CROSBY.

.. okay, maybe the wording will be a bit different. But at the first hint of NHL hockey on NBC once the season begins, the Pittsburgh love will be palpable. Even worse than before. Pens fans will buy No. 87 jerseys customized to say "SAVIOR" on the back. Hell, Caps fans might even do it too. It's going to be weird, wild stuff, man.

And you know what? Who cares?

I don't particularly mind who saves the NHL season, as long as it gets saved. It can be Ed Snider breaking rank and being the first owner to publicly speak up against the lockout, as we asked for earlier. It can be a racy Jeremy Jacobs sex tape coming out and forcing the Bruins owner to resign from his position as Chief Jerk on the NHL's Board of Governors. It can be Crosby and Burkle and Mario riding in on their horse and saving us.

I really, truly don't care. You know why? Cause it'll mean this. 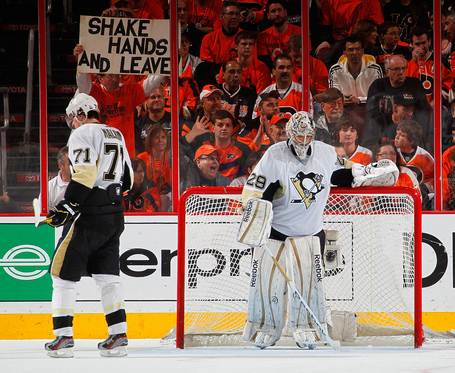