We've been tracking zone entries for the Flyers since last year's playoffs, keeping track of who sent the puck into the zone and how they did it (by dumping it, carrying it, etc).

This has allowed us to extract a lot of numbers, answering questions like "which players most often keep control of the puck at the blue line?" or "how often do the Flyers win the neutral zone and advance the puck to the offensive end?"

In this mid-season review of the zone entry data, we will update those answers through game 41. We will also try to test the questions themselves, looking to see which numbers are stable enough that we should put faith in them.

We know that score effects markedly affect shooting totals, as teams that lead go into a defensive shell. After last year's playoffs, we concluded that a similar effect was impacting zone entry totals, so this year's work has largely focused on situations where the score was close and score effects would be minimized.

Now that we have a larger body of data to draw from, let's revisit this question and see whether we come to the same conclusions so we can make sure we're using the right set of data for the subsequent discussion of the Flyers' results. We'll separate the numbers into three categories:

The table below dissects how various components of shot differential are impacted by the score. The first line is the Flyers' fraction of the zone entries -- how often they won the neutral zone play and pushed the puck forwards. The second line is a measure of their efficiency in the attack zones -- how much the Flyers did with each zone entry compared to how their opponents did with theirs. The third line is shot differential, and derives directly from the first two lines.

It seems clear that score effects are having a huge effect on neutral zone play, with the team that trails getting roughly a 4.8% boost compared to their tied results. The effect on attack zone results seems more muted; the trailing team may be playing more desperately, but it isn't resulting in more shots per entry -- perhaps because of the leading team's commitment to a defensive shell. If anything, the trailing team might actually get fewer shots per entry.

In other words, the much-discussed score effects on shot differential arise entirely from neutral zone concessions, with play in the attack zones having a neutral or mitigating effect. For this zone entry work, we will focus on close games, though we hope to some day have league-wide data to permit adjustments for score effects.

However, winning the neutral zone isn't just about getting the puck into the offensive end; the offense is much more effective if they can maintain possession of the puck as they enter the zone rather than dump-and-chase. The red curve below shows the Flyers' share of the decisive neutral zone wins, or what the blue curve would look like if you removed all dump-and-chase plays. Here we again see that the Flyers are winning the neutral zone, and perhaps winning it more decisively of late. 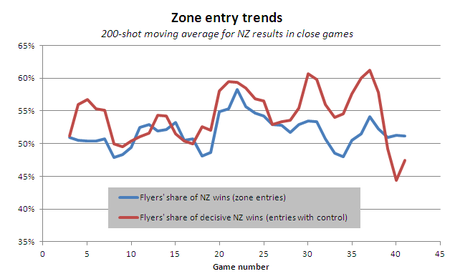 In our quarter-season review, we observed that some of this neutral zone edge was being wiped out by getting outplayed in the attack zones, giving up more shots per opponent's entry than they were getting on their own entries.

As shown in the chart below, there is some good news there as well. The Flyers have been giving up more shots to the opponents per entry (green line; dashed line is a fit to the data) lately than they were early in the season, but their shots for (red line) has been going up even faster and has recently surpassed the shots against. 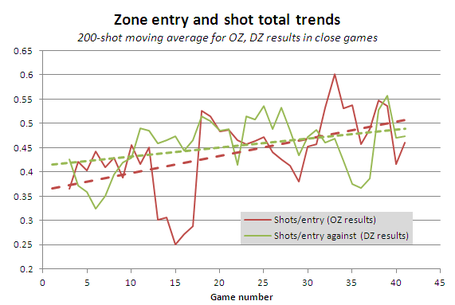 The totals for the year still have the team getting slightly outplayed in the attack zones (0.43 shots per entry for, 0.44 per entry against). However, it appears that perhaps the team has been playing a more open style and getting better results from it lately. We don't have enough data yet to know whether changes of this magnitude are real or just simple fluctuations, so I'm hesitant to draw that conclusion, but it bears monitoring.

Since we started this work, one of the recurring questions has been which individual statistics would be most useful. Up to now, we've mostly made those decisions by looking at the rankings the numbers spit out and asking whether it made sense to us. This isn't a great way to go about it, since it means we'll reject anything we don't already believe and the stats are prevented from really adding to our understanding.

Now that we have 41 games of data to review, let's do this more objectively. If a stat is really measuring a talent the player has, it should persist from game to game. We'll do a split-half reliability test, asking for each statistic we've calculated, "if a guy has a high score in the odd-numbered games, should we also expect him to have a high score in the even-numbered games?" If the answer is no, then the statistic is probably just noise; if the answer is yes, then it probably measures some sort of talent that the player has.

We'll limit this to players with at least 150 minutes of 5-on-5 play, an arbitrary cutoff that gives us 7 defensemen and 12 forwards. For that few players, it's pretty easy for a random distribution to look like a correlation, so we only want to pay attention to the stats where the correlation is large enough that we can be >95% confident that it's real -- that means we're focusing on stats where the correlation is at least 0.67 for defensemen or at least 0.50 for forwards.

At this point in the season, the only numbers we can say with confidence are driven by individual talent are:

In the tables above, light yellow shading signifies a number that is near the significance threshold and may prove to be an individual talent when we have a full season of data. For now, I'm hesitant to make use of any of those numbers with one exception: Kimmo Timonen sends the puck into the offensive zone so much more than the rest of the defensemen (10.7 times per 60; others average 5.9) that I am comfortable identifying him as the defenseman most likely to bring the puck through the neutral zone.

So with that said, let's look at those four metrics:

For forwards, the primary talent is retaining possession of the puck as they cross the blue line (and having linemates who do the same). One thing surprises me on this list: at the quarter pole, I noted that Sean Couturier rarely retained control of the puck on his zone entries. Since then, he has played with stronger linemates and collected a fair number of points, so I was expecting to find that this number had risen, but it actually went down from 51% to 47%. Hopefully this is something he can develop as he matures.

It appears that the fourth line has consistently generated a lot of shots after OZ faceoffs, as the leaders in this category are Tom Sestito, Zac Rinaldo, Maxime Talbot, Harry Zolnierczyk, and Sean Couturier. This might suggest that they have a particular skill for set plays, but there might be another explanation.

The Flyers' defensemen who have faced bottom-tier competition -- Erik Gustafsson, Andrej Meszaros, Matt Walker, Andreas Lilja, and Kevin Marshall -- are also the worst on the team at getting a clear after a defensive faceoff. So for both the offense and the defense, we see fourth lines getting the best of third pairings. This creates a chicken-and-egg problem: are fourth lines driving the shot total up by shooting instead of setting up the play, or are third pairings driving the shot total up with blown coverages?

The Flyers are controlling the neutral zone by a clear but not overwhelming margin. They were getting outplayed in the attack zones early in the year, but seem to have improved in that area lately. The most reliable and important individual metric to come out of this work is the fraction of the time that the player retains control of the puck as he brings it into the offensive zone, which predictably sorts Jagr, Giroux, and Briere to the top of the heap but surprisingly ranks Couturier near the bottom.