Do goaltenders really get in a rhythm?

Share All sharing options for: Do goaltenders really get in a rhythm?

Anyone familiar with Bryz will tell you that he needs consecutive starts over a sustained period to find his rhythm.

This refrain has been heard many times from many corners this season. It's been said by beat writers, columnists, and fans; it's been said of Ilya Bryzgalov in particular and of goalies in general.

But that doesn't make it true. Join us after the jump as we once again put memory to the test of objective evidence.

Why would such an opinion be so widespread if it weren't true? This could arise because of a struggle to distinguish between correlation and causation -- a goalie who plays poorly for a stretch won't get many consecutive starts, while a goalie who is playing very well might get put back out there again and again.

Our memories then assign a causality that may or may not be there; we start to believe that goalies need to play a lot of games in a row to perform well. But there's a difference between "goalies have done well in the stretches where they played a lot of games" and "a coach should play a goalie in a lot of games because then he will play well."

The latter statement might be true, but it also might just be simple superstition. Let's put it to the test.

The question isn't whether the goalie's average performance over a long streak is better; the answer to that will probably be yes, because he only gets to have a long streak if he started off hot. What we really want to know is whether his fifth -- or eighth, or tenth -- straight appearance is better on average than his average first or second appearance.

To answer that, we can take all of Bryzgalov's games since the start of the '08-09 season (his first full year in Phoenix) and look at how he did in his first appearance after a game off, or in his second straight appearance, or his third, and so on. That data can be compiled into a plot of save percentage versus consecutive appearances: 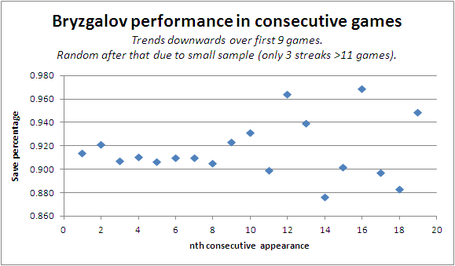 In fact, we see just the opposite. Since '08-09, Bryzgalov has had 48 appearances that followed a game he didn't play in, and in those games he posted a save percentage of 0.914. In the 40 occasions where he was given a second straight start, he did a little better in the second game, at .921. But from there it got decidedly worse; he had 114 appearances between games 3 and 8 of a consecutive games streak and had a 0.908 save percentage over those games.

Bryzgalov did perform particularly well in games 9 and 10, but at that point the sample size is quite small, as he had only seven ten-game streaks over this ~300-game span. Reasonable people can look at this data and conclude different things. I personally see that he underperformed in games 3-8 of the streaks (where we have a reasonable amount of data) and in games 14-18 and find it hard to believe that a switch turns on in game 9 and off in game 13. But with the small sample size, we can't say for sure, so let's look at some other goalies to build up the data a little.

We'll add in the numbers for Henrik Lundqvist and Pekka Rinne, two consensus elite goalies whose careers are at a similar stage to Bryzgalov's. That gives us the following chart: 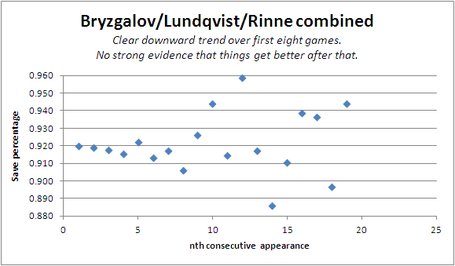 Each goalie shows a similar pattern: over the first nine games or so, there is a general downward trend, and beyond that there are so few games that the data gets pretty scattershot. When they are combined, the downward trend over the early part of the streak becomes very clear, and it becomes hard to argue that there is any real benefit to extending the streak further.

Let's look at one more goalie. Miikka Kiprusoff has played in 70+ games every year since the lockout, and is by far the leader in games played over this span. If any goalie has a talent for playing lots of games in a row, it would be him. 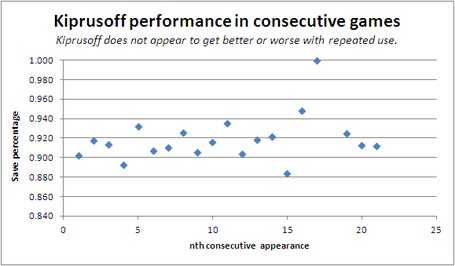 Unlike the other goalies who appeared to decline somewhat with consecutive appearances, Kiprusoff's performance remains essentially unchanged. As with most goaltender studies, this may be a sample size limitation rather than a true talent, but what he has shown so far is not a tendency to get better with use; it is an unusual tendency to avoid getting worse from fatigue.

Bibliography: Some coaches who go with the hot hand will look brilliant through random luck; goaltenders also do not need to see frequent shots to get in a rhythm during a game.