The growth of James van Riemsdyk

Share All sharing options for: The growth of James van Riemsdyk

As a No. 2 overall pick, James van Riemsdyk's development has been heavily scrutinized over the years. After last year's playoff run, people had very high hopes for him, and most of the comments I hear this year are from people who are disappointed that he hasn't had a 70-plus point breakout superstar season.

That's a shame, because he has quietly taken a very nice step forwards in just about every measure.

Goals scored is the product of two statistics: shots on goal and shooting percentage.

Both are related to a player's talent -- a player can be good at getting shots off and/or good at getting high-percentage shots. However, as we often emphasize, shooting percentages are particularly subject to random fluctuations.

A year seems like a long time, but players just don't take all that many shots per year, nowhere near enough for the bounces to even out. If we program a robot to take 200 shots per year and randomly make 10 percent of those shots, over a 10-year career that robot will probably have a season with double the shooting percentage of its worst year. So unless you expect a player to be more consistent than a robot, it's probably best not to give up on Scott Hartnell for shooting 8.2 percent in 2009-10 or give him a big extension for shooting 17.6% percent this year -- that's just how the small sample sizes work.

This year, van Riemsdyk's shooting percentages have been down from last year, and I don't want to hold that against him. But let's look at what he can control.

At 5-on-5, last year he averaged 9.0 shots on goal per 60 minutes played; this year he's up to 11.0 SOG/60. That's a 22 percent increase, which is very good -- even among young, improving forwards, not many players increase their shot rate that much in a single year: 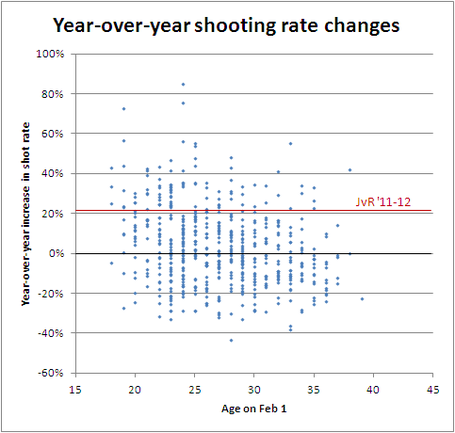 Not only has van Riemsdyk improved his shot rate as much as we could reasonably hope for, but those shots are coming from slightly more dangerous locations as well. Last year his average shot distance was 29.7 feet; this year it's down to 28.2 feet.

Yet even though his shots are coming from closer in, random variance has him shooting at a lower percentage -- last year he scored on 11.1 percent of his shots on goal at even strength, but this year only 7.9 percent. That is a huge drop in shooting percentage, enough to completely outweigh the improvement in the underlying numbers -- his even-strength goal-scoring is actually down 13 percent from last year.

We might be disappointed that the Flyers have not reaped the benefits of his improvement yet this year, but the underlying numbers are encouraging. Even though he has not scored more goals this year, he has developed into a better scorer.

Yet the shooting percentage of a player's teammates will affect the player's assist totals. Last year, the Flyers shot 9.54 percent when van Riemsdyk was on the ice at 5-on-5, and this year that number has dropped to 7.75 percent. That alone would be expected to suppress van Riemsdyk's assist total by close to 20 percent. Yet despite the headwind created by his teammates' poor shooting, van Riemsdyk has actually increased his assist rate by 28 percent.

This is a sign of real improvement in playmaking skills.

This year, van Riemsdyk is taking on somewhat tougher competition (his Corsi Rel QoC is up from 0.663 to 0.789). He is doing it with weaker linemates -- no offense to Wayne Simmonds or Jakub Voracek, but last year van Riemsdyk's most common linemates were Mike Richards, Jeff Carter and Claude Giroux.

That would put him on pace for something like 29 goals and 60 points over an 82-game season, which certainly shouldn't be a disappointment -- in fact, it's awfully good for someone who's only playing 15:20 per game.

James van Riemsdyk has improved quite a bit this year. Don't let unrealistically high preseason hopes color your judgment; he's shown a lot of progress this year and only a drop in shooting percentage luck is holding him back.