Ed. Note: Yeah, there's a game between now and the Rangers game on Sunday. We're allowed to look ahead. We don't play for the Flyers.

Now that Geoff has accumulated more than half a season of zone entry data, I wanted to take a look at head-to-head matchups and see whether anything interesting came out of comparing the opponents.

I pulled the data for the seven teams the Flyers had faced at least three times, and something surprising jumped out at me right away: the Flyers have absolutely killed the Rangers in the neutral zone.

When the puck is in the neutral zone, there are four possible results:

Ranks are for Flyers' results compared to other opponents they have played 3+ times. All data is with the score close to minimize score effects; ranks are the same with all data included.

So the Flyers win the neutral zone more against the Rangers than against anyone else, their wins are more decisive against the Rangers, and their losses are less decisive. How big a deal is that? We can work out what fraction of the shots they would get just based on their neutral zone play, assuming both teams had average results in the attack zones: 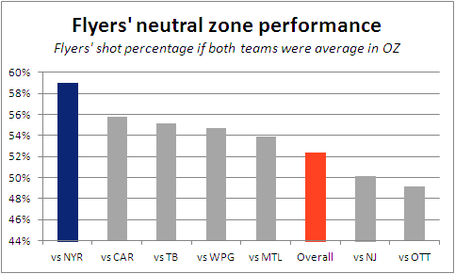 The Flyers win the neutral zone against the Rangers so handily that average play in the attack zones would result in getting 59% of the shots in close games. This is a huge number; the last team to do that well over a whole season was the '07-08 Red Wings. The Flyers are absolutely dominating the neutral zone against the Rangers, and yet they haven't exactly dominated the games...

Let's take a look at their results in the attack zone -- are they getting their share of the shots per entry and limiting the Rangers at the other end? 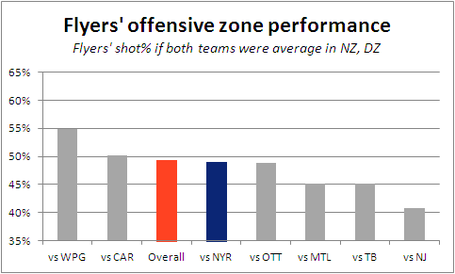 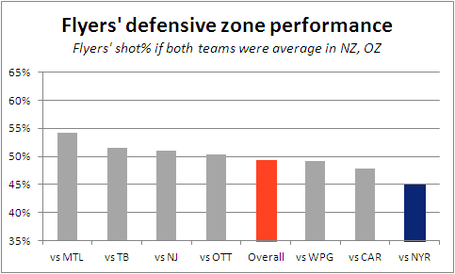 If the Flyers expect to come away with 3 or 4 points from their two games against the Rangers next week -- or get by them in the playoffs -- they'll have to shore up the defensive zone problems the Rangers have created for them.

To make it easier to look at comparisons of how each team played, here's the data in the three charts above reformulated into a table:

Here's the breakdown of the NZ win%, decisive win%, and decisive loss% numbers that went into the overall NZ performance metric: 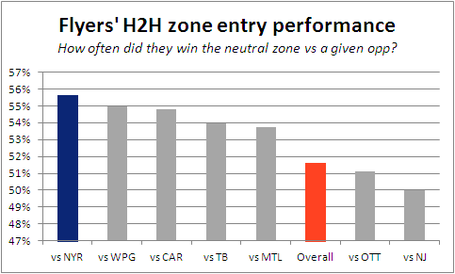 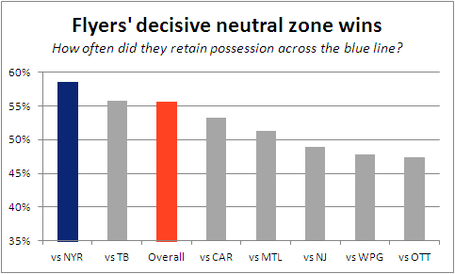 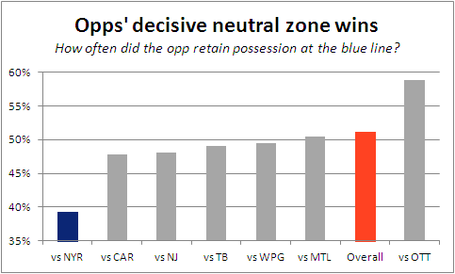