We already mentioned today how awesome Scott Hartnell is this season. He has 35 goals, which is third-best in the NHL (!), and his game-winner on Sunday against the Penguins was quite possibly the best moment of the Philadelphia Flyers' season thus far.

What gets lost thanks to that OT winner, however, is his similarly-important first goal of the game, in which he tied the score at 2-2 by sneaking behind the Pittsburgh defense and burying a gorgeous top-shelf shot behind Marc-Andre Fleury. How'd he get to be all alone down on the goal line, anyway?

Thanks to the asinine, arcane 48-hour blackout rule on NHL GameCenter, we're limited to the NHL.com highlight video of this goal. No alternate angles, no replays. But that's okay. We'll make it work.

The clip picks up with 15:22 left on the third period clock. The Flyers have already gained the Penguins' zone, and Hartnell is down in the near-side, left-wing corner. This is the last you will see of Scott Hartnell for a while. 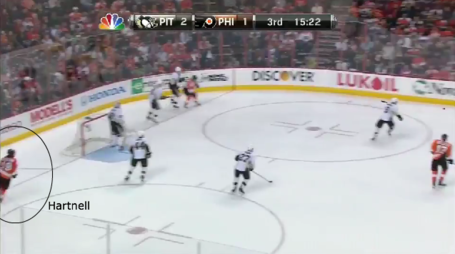 Let's proceed. The puck is up there under the NovaCare ad on the far boards, and it looks as though the Penguins are going to win the race to this puck. That's why still frames can be a little deceiving at times, as that puck is in transit from Claude Giroux in the far corner to Braydon Coburn at the point. Coburn, challenged by the attacking Pittsburgh forward, threw it back off the boards where Evgeni Malkin was the first to retrieve. 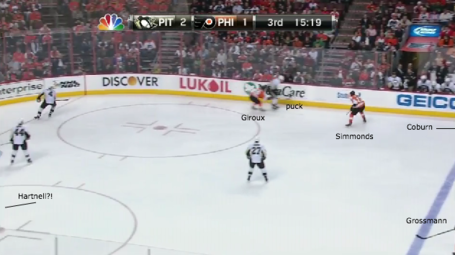 It appeared as though the play could have been over. Malkin had body position on Giroux and he's a tank compared to Simmonds. The defensemen have retreated as a result, and if Malkin just throws the puck out of the zone or gets it over to Craig Adams, the Penguins have eliminated the threat on this shift.

Not what happened. Simmonds wound up being awesome and beating Malkin for the puck -- a victorious puck battle that often goes overlooked on goals like these. Malkin, because he's a giant ogre, skated through and expected the puck to be with him as he reached the blue line.

Pascal Dupuis left the zone and went straight for the bench, thinking Malkin would be carrying the puck up on the rush. Mistake. Chris Kunitz hops off the bench for him, but by that point, Simmonds has separation from everybody and is turning back towards the Pittsburgh goal. 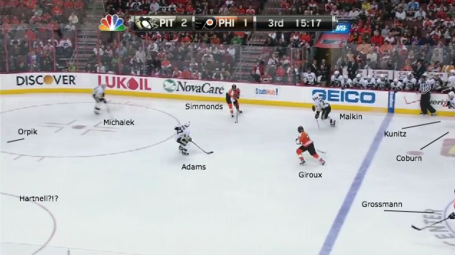 Here you see the result.

Simmonds pushes the puck over to Giroux. Malkin, already frustrated that he didn't get the puck along the wall, screwing up the whole transition, dives in a feeble attempt to cut off the pass. It doesn't work.

Here's where we realize where Scott Hartnell was the whole time. He simply skated behind the net, under the cover of ... something ... and got to the opposite post before Brooks Orpik knew what happened. 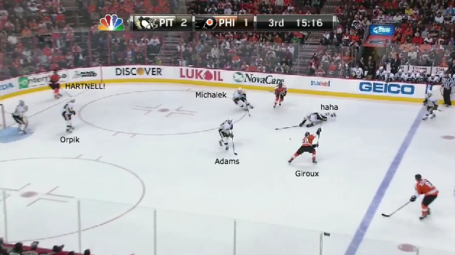 Orpik and the Penguins really don't have a clue what's about to hit them. Giroux's a BAMF, so instead of ripping the shot like everybody thinks he will, he shovels it down low to Hartnell, the invisible man. 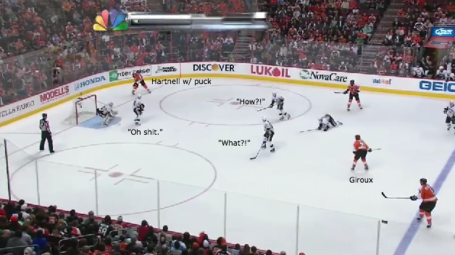 To recap, a bunch of things happened that led to this goal:

A true team effort, this one was. Also, Scott Hartnell is probably really good at hide-and-seek.