Flyers vs. Bruins: Was Matt Carle to blame for Tyler Seguin's goal?

Share All sharing options for: Flyers vs. Bruins: Was Matt Carle to blame for Tyler Seguin's goal?

Two big-time nationally televised games this weekend gave us a good measure of how the Philadelphia Flyers are playing right now, and we have to be happy about coming out of it with three points.

The attention paid to these games also made them a nice window into how fans view the team. While Geoff's articles should have me braced for this by now, I was once again struck by how rabidly opposed to Matt Carle many Flyers fans are.

After the jump, let's look closely at how much blame Carle received for the one goal against in his 43:36 of even strength ice time, and how much of it he deserved.

As we pick this play up, Bryzgalov has just sent the puck around the boards to Carle. He does not handle the puck cleanly and Brad Marchand takes it away from him. This is without question a misplay by Carle, but the situation it creates is not especially dangerous: a 3-on-3 with good man coverage and a fourth Flyer just off-screen about to join the play. 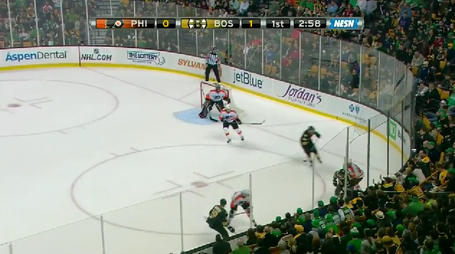 As Marchand passes to Patrice Bergeron, Tyler Seguin cuts towards the net, and Wayne Simmonds Max Talbot picks him up. 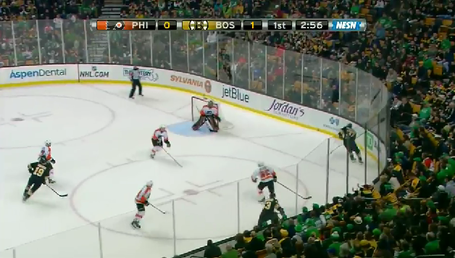 Erik Gustafsson comes down to cut off Bergeron and Simmonds Talbot is covering Seguin. Carle is cheating off of Marchand to close the passing lane, and Matt Read is scanning the crowd for hot chicks in "Kiss me I'm Irish" shirts. 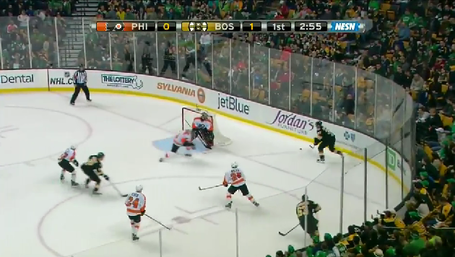 Just as Bergeron releases the pass to Seguin, Simmonds Talbot peels off towards an open area of the ice, leaving Seguin open. There are now five Flyers skaters and three Bruins in the picture, but somehow none of the Bruins are really covered. 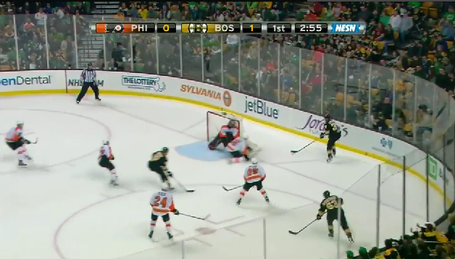 Bergeron's pass gets through Gustafsson and Seguin scores. 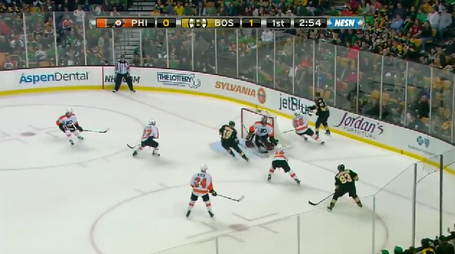 The coverage here was really bad, and not one Flyer can be singled out as having done his job well on this play. But if I'm assigning blame, Simmonds Talbot is my clear number one target. But that's not how the Twitterverse saw things:

Carle lost his man there.

I blame that retard Carle. #trademattcarle

Have now idea who Carle was covering there but entire coverage was lacking.

Sounds like fans think Carle is either awful or...somehow...Ryan Suter. No gray area with him. It's interesting.

Carle missed the puck, not Gustafsson.He also failed to pick up Seguin and Talbot missed a chance to backcheck.

Carle looked really confused on who to cover on the Seguin goal.

Everyone seems to think Carle should've been covering Seguin there. I only see two ways to come to that conclusion; either a) you only looked at the coverage as the shot was taken and said "Carle's closest; he should've stopped it", or b) you hate Carle and confirmation bias is overcoming rational analysis.

This Carle hate continued all weekend long. Here are the rest of this weekend's tweets from within 100 miles of Philadelphia that mentioned Carle (not including factual tweets like the starting lineup). This is literally every tweet from the Twitter search for local mentions of Carle, excluding replies.

Hey Carle, have a seat buddy.

OK, not everyone hates him.

Way to go Matt Carle. If the pens score on this power play I'll hate you even more than I already do

We're talking about a team that's given up 12 goals in the last 9 games, right?

In other news, is Carle the biggest waste of space in the NHL?

You need to send Matt Carle in there, he isnt good for anything else.Let Kunitz face wash him, maybe it will help him pass better.

Carle has no clue where he is right now. And he's looking for his pants right now.

Carle grab some bench jesus christ that was awful

And finally, at least there is one fan who has the right idea: