Flyers vs. Panthers: So what happened on that first Florida goal, anyway?

Share All sharing options for: Flyers vs. Panthers: So what happened on that first Florida goal, anyway?

I think we realized on Monday how much fun video breakdown posts can be. So, perhaps you should expect more of them. Like, well ... right now!

Last night's loss to the Florida Panthers wasn't really a just result, as despite dominance in the shot category, the possession category and the chances category, the Flyers fell by a final score of 2-1.

It all started to go downhill for the Flyers a little past the midway point of the first period. They had just failed to capitalize on their second power play of the game when Stephen Weiss took the puck in transition, attacked the Flyers zone and ripped a shot over Ilya Bryzgalov's blocker-side shoulder. Damnit. It's gonna be one of those kinds of nights.

Danny Briere is out of position in the neutral zone. Like, dude. You can't be near the faceoff dot at center ice when, um, Stephen Weiss is ... over here: 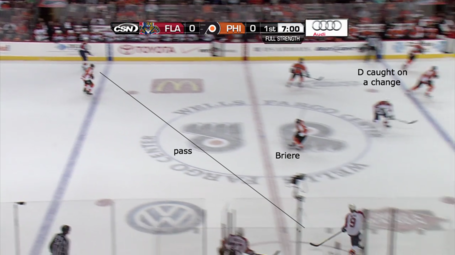 If Briere is a little closer to the wall, that pass can't get through, or at the very least, Brian Campbell would be thinking twice about making it. (Also, for the record, that's Matt Read back there in the offensive zone, and while it looks like he's not trying, it's just the way this still image came out. When Campbell released the pass, Read was reaching to get his stick in the passing lane. Just couldn't get there in time.)

But, alas, Briere is out of position and Weiss has a clear path through the neutral zone and into the attacking end. The defense is in the middle of a change, not expecting such a quick breakout by the Panthers, and that's when everything gets screwed up. 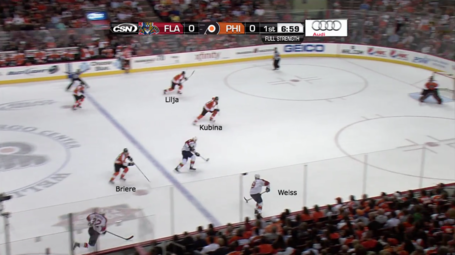 Both the FS Florida and the CSN Philly broadcasts seemed to focus on Kubina as being out of position here, but I'm not exactly sure that was the chief reason Weiss was able to score the goal. It's really tough to blame Kubina for being out of position when he's hopping over the boards and-- "shit, that guy has a clear path to the net!"

Considering, I actually thought Kubina did a decent job of getting across the ice. He's not the fastest dude on the team, but he got to the point where he forced Weiss to cut inside instead of going directly at the net. Seems like an optimal outcome -- because theoretically, Weiss shouldn't be able to get all the way to the slot here. But we'll get to that in a minute. 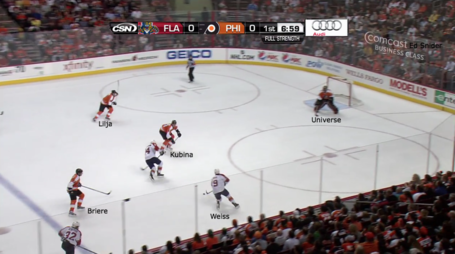 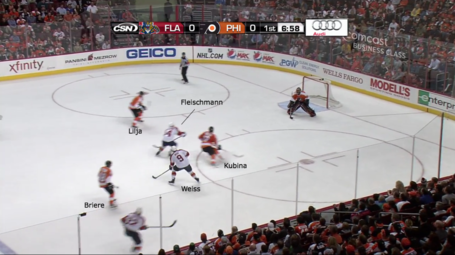 Here's where Kubina screws up. When Weiss cuts to the inside, Kubina gets all discombobulated and somehow winds up with his back to him. You can't really play effective defense with your back to an attacking player unless you're planning on farting him off the puck, and something tells me that won't work in the NHL unless you had a really, really awful pre-game meal.

Kubina should be standing up to Weiss right here. Instead, he's staring into Ilya Bryzgalov's eyes. We know the result. Weiss cuts to the high slot, and by the time he's about to rip the shot, both Flyers defensemen are caught down low near the hash marks, failing to challenge the guy with the puck at all.

The defense was definitely at fault here, but I can't help but absolve them a little bit simply because they were in the midst of hopping on the ice as this play developed. They undoubtedly would have been in better position had they already been on the ice.

Danny Briere is certainly at fault too. Not only is he out of position in the first place -- the mistake that caused both the pass and the quick transition that caught the Philadelphia defense with their pants down -- he also doesn't give his best effort on the back check.

With a little more of an effort -- an extra stride, even -- Briere could have cut off Weiss as he cut to the slot. Or, perhaps better, Weiss would have opted to skate to the outside, where Kubina could have had him covered. Reverse angle time! 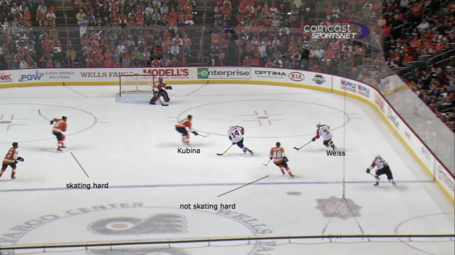 Still images can be deceiving when it comes to analyze skating stride, but if you don't believe me here, go back and watch the video above and tell me Briere is skating as hard as he can. Maybe the argument is that Briere was only worried about Kris Versteeg (crossing the blue line in this image), but an extra stride would have cut off Weiss and wouldn't have taken him out of position to cover a drop pass to Versteeg.

Give credit where it's due for Weiss taking advantage and finishing on this chance, but in my eyes, a couple of extra strides from Danny Briere could have eliminated the chance -- and thus the goal -- all together.